I built this circuit for an introductory PCB design class at Grove City College. The circuit uses an op-amp/BJT current sink to draw 250mA from the battery. This leads to a more accurate measurement of the battery voltage, which is read by a TI LM3914 IC that drives a 10 LED bar graph display.

The design was originally inspired by this circuit on EDN. The battery tester can test either a AA battery or a AAA battery. It is a constant current battery tester and draws 250mA from the battery being measured regardless of that battery’s voltage. Drawing a realistic load from the battery allows for a more accurate measurement of the remaining capacity of the battery. The tester is powered by a 9V battery, which can also be tested to ensure that it can supply power to the circuit. After inserting a battery to test, the LED bar graph will light up proportional to the battery voltage within a range of 0 to 1.5V. 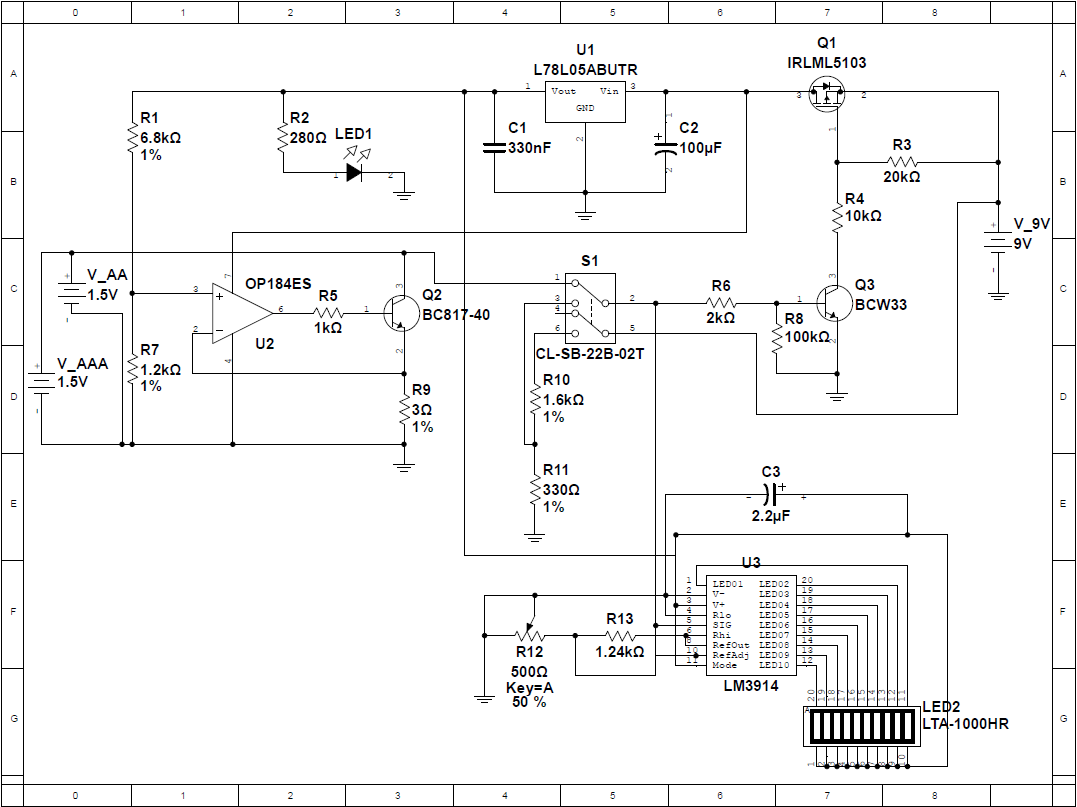 The circuit schematic is shown above. It can be roughly divided into the following sections:

The current sink is comprised of an op-amp (U2) and an NPN BJT (Q2). Resistors R1 and R7 act as a voltage divider and set the non-inverting input of the op-amp to 0.75V. The inverting input of the op-amp is connected to the emitter of the transistor and to one terminal of the load resistor. The op-amp will drive the base of the transistor to keep its inverting and non-inverting inputs at the same voltage. R5 limits the op-amp output current. This results in 250mA being drawn from the input test battery through the transistor and the load resistor since 0.75V / 3Ω = 0.25A. The current is not dependent on the voltage of the input battery; the op-amp will drive the transistor to adjust for the voltage of the test battery and draw a constant 250mA. Two voltage sources are shown on the schematic to represent the AA and AAA battery inputs. In practice, only one of these batteries would ever be connected at a time.

The last section of the circuit is the LED bar graph and driver. LED2 is a 10-segment LED bar graph used to indicate the status of the battery. The LEDs are driven by a TI LM3914 Dot/Bar Display Driver. This IC takes the input voltage from the battery, and using a series of ten internal comparators drives the output LEDs. The chip is set to LED bar graph mode by setting pin 9 (MODE) high. Resistors R13 and R12 set the LED current and control the input signal range according to the following equations:

R13 was selected as 1.24kΩ so that the LED current would be approximately 10mA. R12 is an adjustable trim potentiometer that is wired as a variable resistor. Ideally, it is set to 250Ω so that the reference voltage is set to 1.5V. However, the resistance can be adjusted from 0 to 500Ω so that the circuit may be calibrated to account for non-ideal characteristics in the actual circuit.

The PCB layout from NI Ultiboard is shown below. The board utilizes a ground plane on the back layer with all but one signal routed on the top layer. 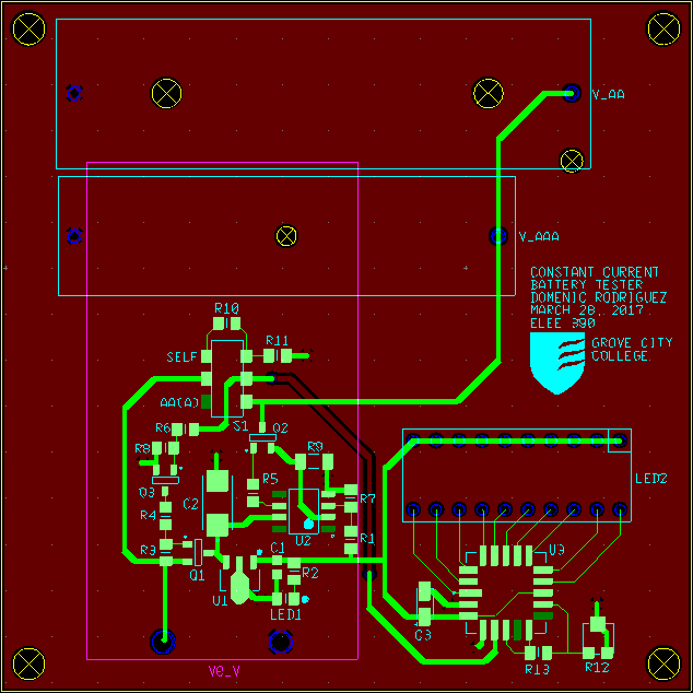 Here are the front and back of the PCB, fresh out of the packaging: 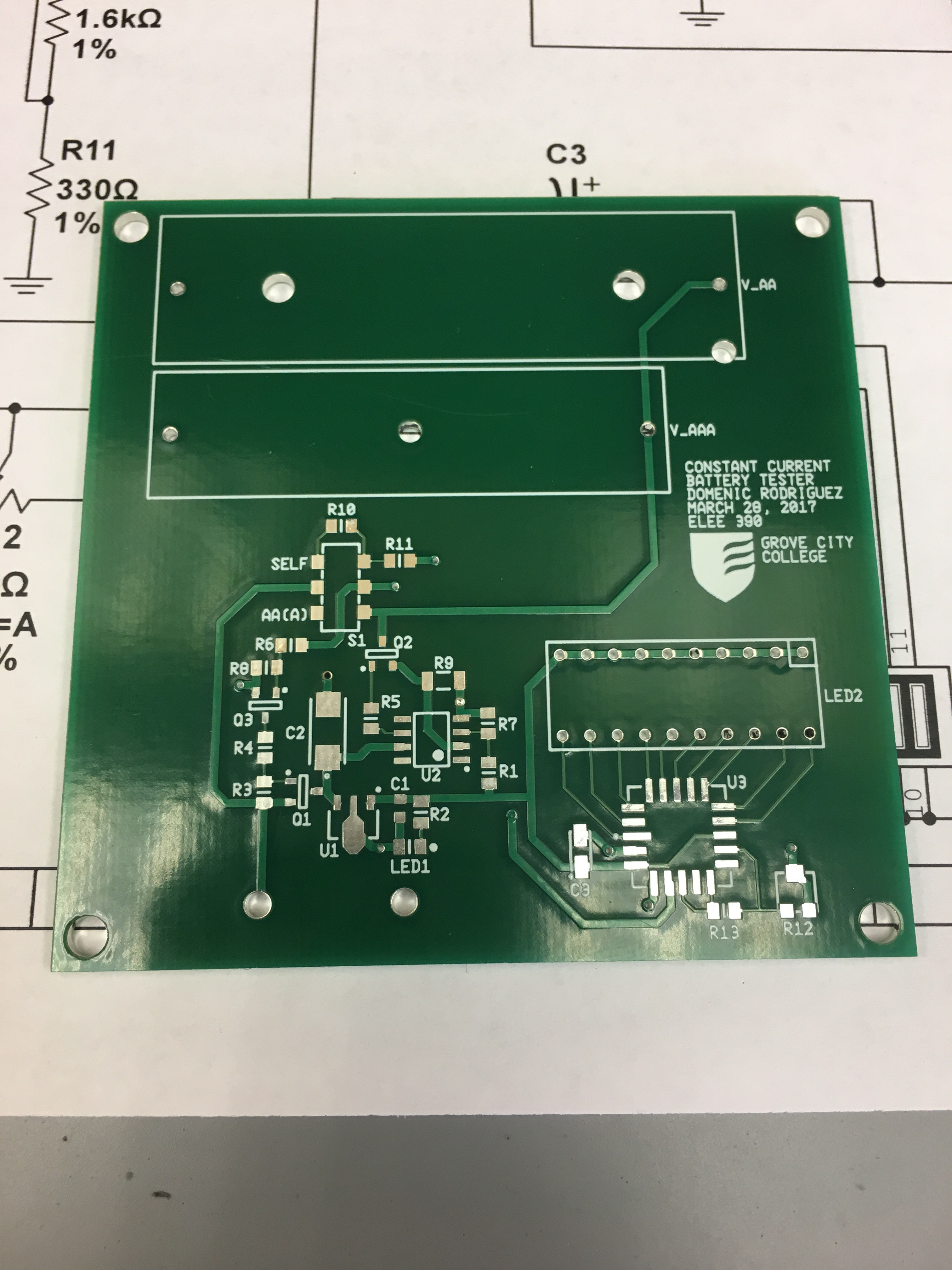 I started by hand soldering all of the surface mount components. Most of the components were not too bad, although the LM3914 PLCC20 package was a bit of a pain. 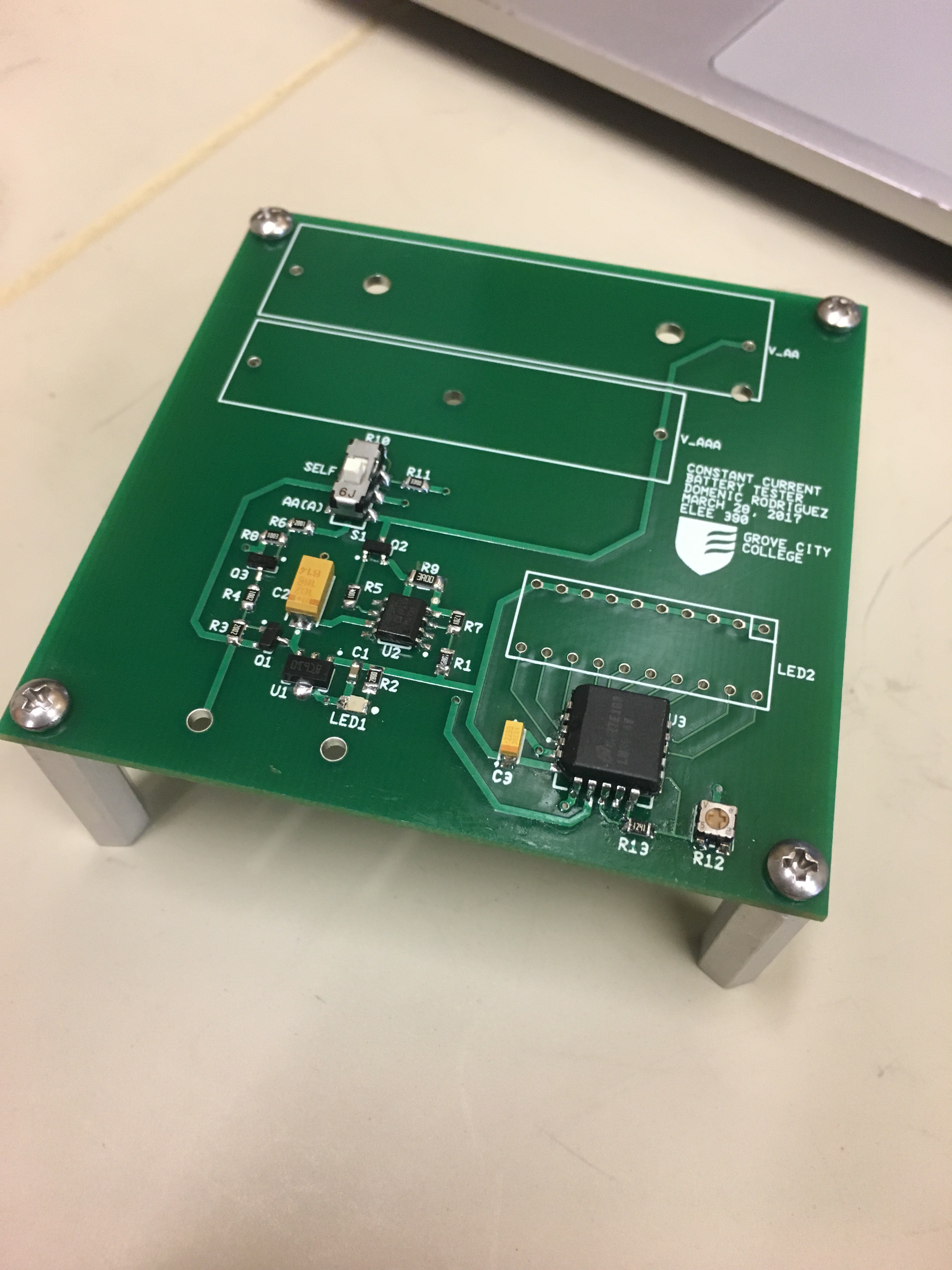 A self powered 18650 Lithium-Ion battery discharge board.
Project Owner Contributor

A 2S/2A LiPo charger mounted inside the Jumper T16 so I can charge the battery without removing it from the case.
Project Owner Contributor