This project was born out of my desire to smoke less despite my total lack of will.

At first I thought of using an arduino and servos, but I knew it would take me a lot of time so I decided to make in the meantime a simple box locked by a mechanical timer.

Trying to modify a common kitchen timer to make it last 5 hours instead of 1, I realized that it was much simpler than I imagined and that it also had a lot more torque than I expected. So logically I thought "Why not do a fully mechanical machine?"

I then fixed the constraints of the project as follows:

1. The box must contain 200 cigarettes and take approximately 5 hours to deliver one.

2. It must be locked and reasonably inviolable but must unlock automatically when empty.

3. No electronics, the motor will be a mechanical kitchen timer.

4. The parts must be manufactured on spot, if possible printed, except for the timer and the hygrometer.

5. The cigarettes must be delivered to the top of the box. 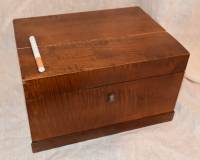 Yes, I know I should better stop smoking, but looking for a technical solution is much more fun.

I love the project - I'm a clinician that works with patients' substance use issues from a harm-reduction perspective.

This is not medical advice lol but appreciate that products like snus or commercial vaping products (mainstream market leaders, not e-bay specials) have an estimated **one-twentieth** the harm of cigarette smoking. (There's not much research on people who consume the patch or gum for extended periods, but the little that has been done suggests that people can consume nicotine ad lib for decades with relatively little harms to their health, unless they have certain underlying conditions).

It's the smoke, not the nicotine, that's causes 95% of the harm. Consider learning to like vaping or snus - it "won't be the same" at first, but they have their own aesthetics/rituals that can be more reinforcing than simply the patch or gum...which weren't designed to make the nicotine administration particularly pleasant (moralists). Again, not medical advice.

Nonetheless, I think devices like this are awesome - this is literally what I was looking to find when I logged on here this morning. Best of luck.

Follow me building an wood fired pizza and bread oven. I use mostly stuff I got for free, with some exceptions. No Arduino added, promise!
Project Owner Contributor

The 2017 Hackaday Prize
Food dehydrators are conceptually very simple. Let's see if they are that easy in practice.
Project Owner Contributor

The now classic conversion of an aquarium pump, and what you probably shouldn't do too..
Project Owner Contributor