This project aims to create a flexible, fully featured Engine Management Systems (EMS aka ECU) based on the low cost and open source Arduino platform.

Speeduino comprises both the hardware and software components that would be expected from a commercial engine management system, but in an open and low cost package.

Both the hardware and software continue to be under heavy development, but are capable of running both fuel and ignition for engines up to 8 cylinders.

MXP4250A would be replaced by an OEM MAP Sensor? MXP4250AP pinout on datasheet is Vout P1 and VCC on P3 so I guess than is possible to use a wide range of stock MAPs, or am I doing so wrong with that?

Where can i purchase the electronic components and board connectors

I'm impressed with what you are doing here and when you add "low cost" you've got my attention. I have a number of questions but understand I am starting from the most, very basic beginning here. If I ask what amounts to a stupid question please be patient. I freely admit my ignorance right now. I hope it doesn't last long.

1.) I may have missed or overlooked this but are you dealing with the OBD2 protocols or are you developing an ECU more akin to one that is more typical to what is used in racing? I ask because I assume you have a commercial interest with your project and OBD2 with its "Check Engine," light is a mandated common denominator with most engine management issues.

2.) I have not read everything you have put up that's related to your project but I'm curious about how you have dealt with cold starts? Are you maintaining any "history" in a memory as a reference?

3.) My decision to participate here is because of the other side of the ECU's. OEM ECU's are generally a conglomerate of what is typically referred to as "modules," which manage or control systems other than the engine. It's that other side of the ECU's I'm interested in. I usually build with Ford components and use their control packs for engine and transmission management but that is all they control or manage. A couple of effected systems because of Ford's methodology are power steering and ABS. I'm throwing these out as just examples of the many effected systems. Typically with power steering the amount of electric, electronic or hydraulic assist is controlled by monitoring some component related to the real time speed of the vehicle. When using power steering on a vehicle being managed by a control pack PCM (ECU) there is no monitoring of speed and the whatever type of power steering is being used it is always operating at the systems base reference. The amount of power steering assist required for parallel parking and driving on an expressway at 90 mph are very different yet with the control pack and the lack of power steering support the amount of assist is the same. It's not a safe condition. ABS takes a lot less writing to consider. Although ABS usually has a stand alone control module the ABS is often a component of a traction control system which is communicating with and directing ABS operation. Because of this ABS and traction control are usually removed from the vehicle.

My goal is to find a way to get all of these non-engine systems controlled by the original installed PCM (ECU) working without a dependence on the control pack PCM. That is except to monitor data values as needed. My concept is to use the control pack PCM like a static sensor for reading data as needed but without any of the communication protocol nonsense which in my mind is the source of compatibility or non-compatibility issues with the electronics used in todays vehicles.

My original thought was to use the original OEM PCM for all of the non-engine systems and let the control pack PCM control the engine. Both Auto Meter and Dakota Digital have assured and convinced me that this is not possible because of the "as designed" requirement for these modules to communicate. There is no way to remove or disregard the communication requirements of OEM systems so they can stand alone. This is how I understand what I've been told anyway. A different protocol is needed. I don't know enough now to understand if what I'm thinking of would still be a Can Bus protocol system or not.

Finally, systems like Ford's Microsoft Sync used for features like GPS and internet access is beyond my interests and alternatives are available if these features are desired.

My questions right now amount to this; Am I wasting my time chasing my tail with this? Some have told me I am. Can Arduino be used to accomplish my goals? I have Ford dealership level access to PCM data so I don't need to chase at least that much support. I'm under the impression that components don't care about protocols. An electric power steering rack only requires the proper voltages to operate as conditions dictate. There is nothing inherent to the rack itself that dictates protocols or data formats. I'd appreciate anything you can share about required reading and what equipment and supplies I need to pick up if my pursuits are viable.

So, I've got a little bit of an oddball question:

What about setting this up for something like CIS? I've got older Bosch CIS units that use a Lambda feedback look to control fueling, and I've been looking into how to hack it into supporting fuel enrichment for turbocharging. This would negate the need for Electronic Fuel Injector support, as it would just need to manage a pressure regulator based on TPS and the CIS Plate position, plus O2 feedback.

You should be able to use parts of this firmware, but I don't think it will work the way you want it to as-is. If I was you, I would make sure I had a deep understanding of how the cis system works from factory, and use parts of this to start writing your own code. Of course, you would have to talk to Josh if you ever wanted to market it, but for personal use it's kind of the point of open source.

Anyways, I'm sure you could pretty easily impliment some sort of valve or pump control scheme to make everything work, and control it all with an Arduino....

Hopefully that was helpful.

Just registered to say this is amazing!

Earlier this year I decided to Megasquirt a small engine, and to save money I re-designed the MS pcb and cut/built it myself using the [now very old] components and design, and the now obsolete Motorola/NXP mcu. What a pain in the ass it was!

I always wondered why this hasn't been done on modern hardware, then found that it has and has been spawned into closed-source commercial products costing ££££.

I wish I'd have found your project sooner!

I'll be following the project closely. Thank you for all your effort doing this :)

Any plans for MAF support?

None at this stage I'm afraid. MAP will likely be the preferred method for a little while.

Really hoping this takes off so I can move away from the more closed source Megasquirt.

Anyone running this on a high powered turbo honda yet?

Not high powered (yet), but one member has recently finished his Civic turbo install: http://speeduino.com/forum/viewtopic.php?f=19&t=206

hi josh can i ask a question about the 3 output pin namely cam pin, pulse pin mph pin of stim. shown on your feature demo is it directly connected in speeduino or need conditioner. which pin in speeduino it will put i'm confuse. is it in sda and clk.  and also how to order speeduino v2 board.

Excited to see more details on the Speeduino shield. If you haven't already, it's worth seeing how the Megasquirt folks dealt with stuff like electrical noise and physical ruggedness--ECUs need to be pretty tough and reliable!

Yeah, this was a big consideration from the start and has been factored into the board designs. All the analog inputs are rail to rail protected etc. Checkout the schematic ( 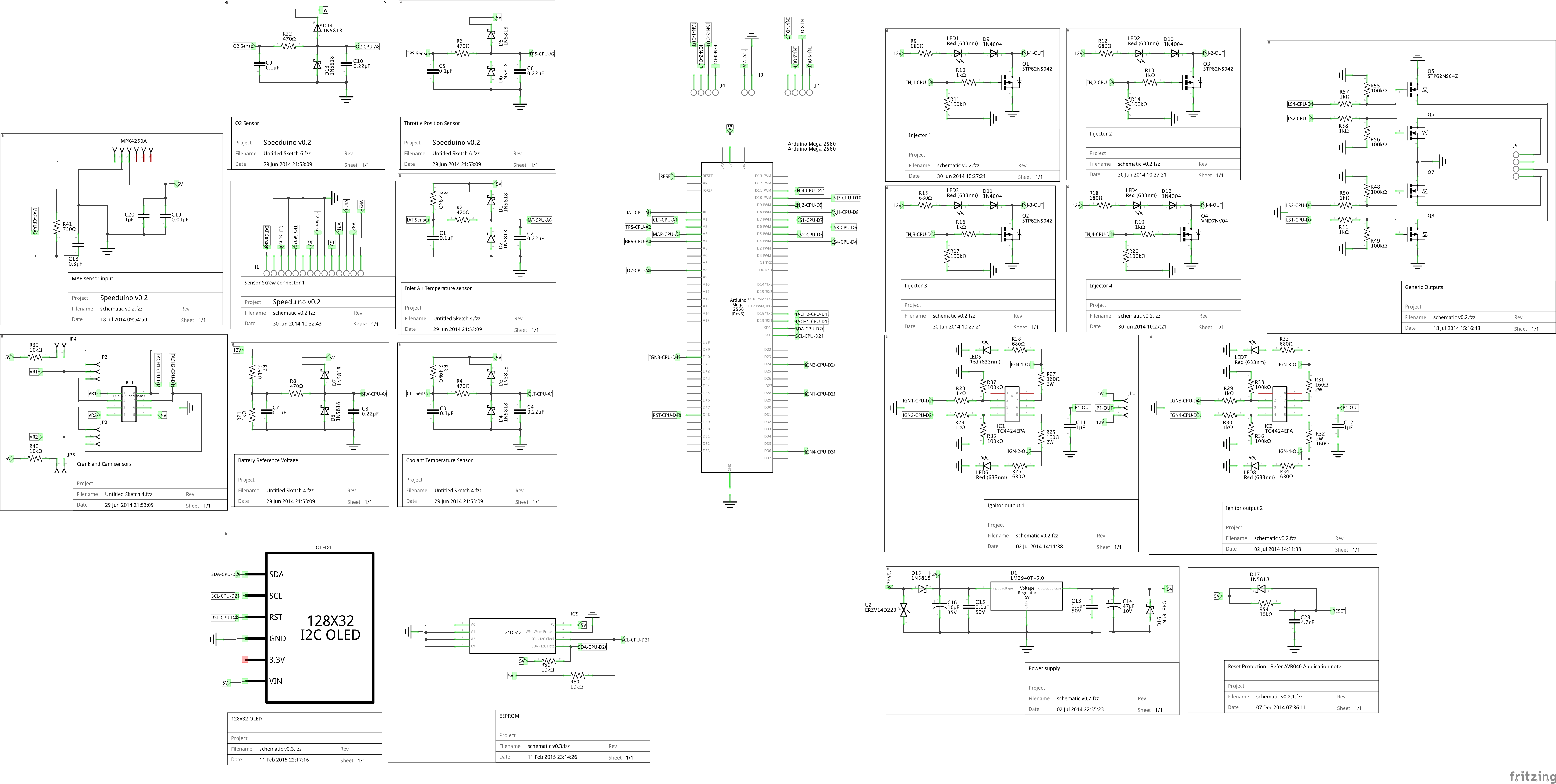 ) , I'm very open to suggestions for improvements as it's an area I've needed to learn a lot about. Combined with a metal enclosure, results have been pretty good so far

The biggest noise problem area has definitely been in the USB serial comms, which are very susceptible to noise. The one thing Megasquirt do here which I'm not (yet) is a CRC check, but so far I haven't found it too necessary if you bring the baud rate down etc.

Makes sense. Could you use some kind of isolation on the USB serial link? Optoisolators? Or maybe some kind of optical fiber connection to avoid the problem entirely?

I'd love to see some hardware/installed pictures--I'm guessing they're somewhere but I missed them.

USB serial is tough as it's relatively high speed and you're very reliant on the cable itself. Short, good quality cables don't tend to have too many problems though, as long as you don't try to push the speed too much.

I added a pic of one of the guys installs. Will gather some more soon.

Can you run the data via CAN bus? You'd need to build in a converter, but the protocol is well-proven in automotive applications..

CAN is definitely on the list for things to start playing with. It does however add a bit of cost to the project, so I'd like some way to make it optional. The goal has always been to have a $100 ECU and I don't think CAN will be possible inside that envelope.

Official Hackaday Prize Entry
Digitabulum is an open motion-capture glove that was intended to be a full-featured, hacker-friendly user-input and sensor platform.
Project Owner Contributor