DISCLAIMER: this project uses radioactive isotopes. Please make sure you take all necessary measures should you intend to replicate it. I cannot be held responsible for any misuse, or accidents that may occur. Be safe!

This project is aimed at creating a true random number generator. Why? Because I want to have a concrete use for some Geiger tubes I have. For now they do nothing more than clicking furiously at some radioactive samples...

It is well known that random numbers generated only with software algorithms have a massive flaw: they're predictable by nature, should one get access to said algorithm.
Radioactive decay is, by definition, completely random: you cannot predict exactly when the next event will occur. This device takes advantage of that and makes an attempt at generating totally random numbers.

-The actual source and Geiger tube (inside a leaded enclosure);

-A power supply/pulse shaper (which powers the tube with 400VDC, and gather the pulses the Geiger generates);

-The Microcontroller, which handles the talk with the PC. 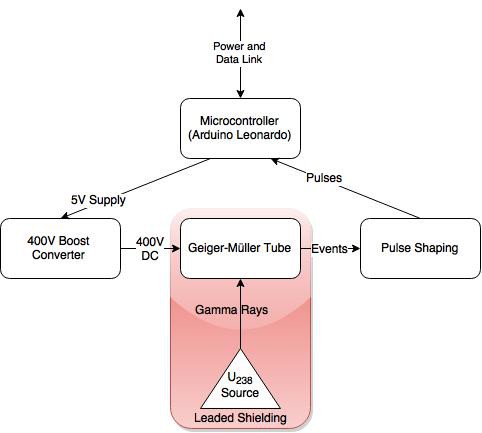 My project has to meet the following goals:

-Safety. I want the source to be completely shielded, and still allow me to carry it around without risking to compromise the lead lining.

-Power. The whole thing has to be powered by USB. That shouldn't be too much of a problem, as the circuit does not draw more than 100mA at full power.

-Size. Something small, that fits in a small enclosure.

-Simple. It should be able to talk with the computer through a COM port, to use the data easily with any program I want... That should be easy to do with an Arduino Leonardo.

-Lifespan. Geiger-Müller tubes aren't eternal: they wear out after a certain amount of counts (10^8 typically). The source has to be sufficiently radioactive to generate enough pulses, but not too much that it wears out after a month.

The Junk Box SDR: a simple project to illustrate how it is possible to mount and mod an RTL-SDR and upconverter into a case.
Project Owner Contributor

RTL-SDR With Upconverter and Case

Prototyping can be an enjoyable endeavor, and I think it can be more enjoyable if everything you needed was right at your fingertips.
Project Owner Contributor