An affordable RFID, motion-sensing, anti-theft alarm and GPS tracker for bicycles, e-bikes and other small vehicles. Based on Arduino

A small Arduino based anti-theft system with motion-sensing, SMS alerts, GPS tracking and RFID keys for use on Bicycles, eBikes, motorcycles, RVs, etc. Designed to be build-able for under $100 and small enough to conceal inside a bike seat, pannier or battery box.

The design goal was to make it super-simple to use- To arm, remove the PICC key card from it's pocket. To disarm, replace the PICC in it's pocket. If it senses motion when armed, it sends you a text message, including GPS.

It uses the Arduino Pro Mini, the Adafruit FONA 808 GSM/GPS board, the MPU6050 accelerometer/gyro and the MFRC522 SPI Mifare RFID reader/writer.

I now consider this project complete and highly successful. I've been using it IRL for 2 months and its great! I'll likely print out a case for it (and add a project log of course) otherwise it's done.

This project is not for beginners. It assumes some familiarity with Arduino and the Arduino IDE. Intermediate soldering skills are also required. Also we're pushing the limits of the Atmega328P RAM. So the we use a separate sketch to provision keys. (Note- I originally wrote it as one app and had the key provisioning data in EEPROM. But it was WAY too big to compile once the MPU and GPS parsing code was added. )

While this project is ongoing, its also quite stable. My biggest remaining challenges are to see-

The current version uses the Arduino Pro Mini at 3.3V which eliminates the need for the boosting regulator that was in the original version. (The first prototype was built from parts I had lying around.) The alarm sits on the FONA like a shield and is about as small as I can make without busting out Kicad . If you wish to follow along and build one yourself, check out the 'Directions' section below.

In addition to the Arduino IDE, this sketches use the following Arduino Libraries and will not compile without them-

This project consists of 2 sketches- Bike-Alarm and newKey. 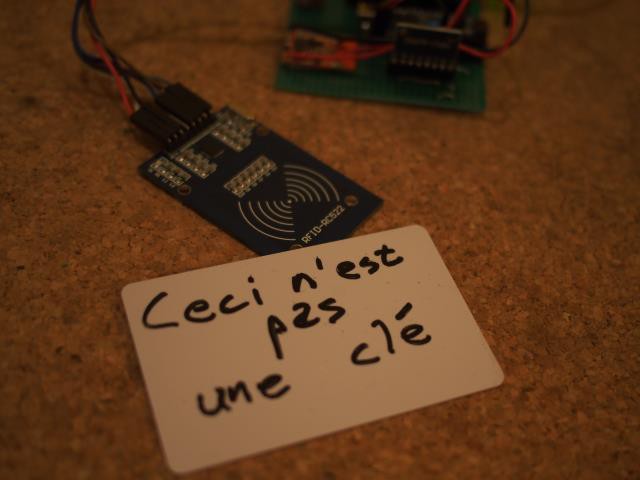 Once the system is installed and configured, to use you simply place the provisioned PICC (card) in it's 'pocket' within range of the RFID reader. Once the reader authenticates the PICC, the alarm emit beep three short beeps, indicating it's disarmed. Remove the PICC and the alarm arms, emitting one long beep.

When armed, the Arduino turns on the GPS, then scans the output from the MPU6050. If motion is sensed an SMS with the GPS coordinated, heading and speed of the bicycle are sent to the alert phone. SMS are sent by default every 4 minutes while motion continues or every 10 minutes until the alarm is disarmed. (This behavior can be altered in the config.) The alarm is silent and does not beep when triggered. However, you could also change that in the sketch, should you so desire... (or perhaps even take some other action, like have it voice dial your mobile and yell at the thief via speaker phone? ;-)

If you run into problems there is quite a bit of disabled debugging code in the sketch that can be used with the serial monitor to figure things out. But even enabling the DEBUG #ifdefs is unlikely to work because the sketch uses almost all of the Atmega328P's memory without any debugging enabled. So you'll probably need to enable the debug messages you need 'a la carte' by commenting out the #ifdef and #endif on either side of them. Most errors can be deduced by the beep. If you run into issues you can post your question here on the project page and I'll try to assist.

To prevent issues always power up with the PICC next to the reader. If the unit beeps continuously on power up there was an error initializing the hardware.

If the unit beeps continuously when arming then there is no GSM network available to the FONA - Check your antenna and SIM.

License (GPL v2) is available on the Github project page.

Bugs can be reported to info@boffinry.org.

This is a work in progress! This does NOT come with any warranty...

Awesome idea/project. Not sure if you are still monitoring this project but I'm just wondering if I swap out the close range RFID for something with about 1m range (so that it acts like a fob like in most cars), would that interfere with the programming/function of it?

But i am running into a problem uploading it.

I have this fault

Any help would be great!

I LOVE your project! It so nice.

My plan is to integrate it into the led lamp, together with an accu wich is loaded by the dynamo.

But I allways search for cheaper variants. The problem is the Adafruit FONA 808 GPRS+GPS Breakout. I really need an cheaper but technical (by the main functions) same board. What do you think about this here: http://www.aliexpress.com/item/GSM-GPS-SIM808-Breakout-Board-SIM808-core-board-2-in-1-Quad-band-GSM-GPRS-Module/32435607442.html
By the way bluetooth could be great alternative authentification or?
If the board is not so good, could please tell us wich of this could be possible:
http://goo.gl/ptbJmc

I would be very thankfull!

I really like your project. Well done. I am looking for the Adafruit FONA 808 GPRS+GPS Breakout, but it is out-of-stock at https://goo.gl/9NMeUq for a while now. Can you recommend me an alternative or tell me where you bought yours?

Hi - I don't know if this is poor etiquette on hackaday or not, but would you consider consulting on the production of a similarly spec'ed device, or even producing it?

I am working on a similar project and i was wondering how you were to pass the gps coordinates to Google Maps and capture the url with the data?

look at the bike alarm arduino sketch on github. The SendAlert() function is between lines 500(ish) and 600(ish) and parses the GPS data from the FONA into a format google maps can consume.

Thank you! That worked.

@shreakergot mine from Adafruit. I don't know of another seller. (Nor of another cell phone that small with GPS) But luckily, they restock things pretty fast.

[EDIT] eBay does have some sellers with SIM808 based boards for sale, but all of them are in China, so you're rolling the dice... (You will get much better support from Adafruit and the prices are around the same.)[/edit]

Thank you for your fast reply.

I really like your project. Well done. I am looking for the Adafruit FONA 808 GPRS+GPS Breakout, but it is out-of-stock at adafruit.com for a while now. Can you recommend me an alternative or tell me where you bought yours?

The 2016 Hackaday Prize
This project is meant as a security add-on to an individual's physical security. Will warn of intruders in real-time and while you are away.
Project Owner Contributor

The 2018 Hackaday Prize
The theme of this project is to detect objects in space or ground for surveillance purposes.
Project Owner Contributor

Made a Radar Station by Using Arduino | DIY

IoT security for the masses