A trainer using a real 65C02 with virtual drag-n-drop peripherals and memory on a PC. Every byte of address space viewable at any time.

This is a trainer that uses a real 65C02 to execute code. Instead of RAM and ROM, all memory is stored on a PC and supplied to the 65C02 by a microcontroller that communicates with the PC. This allows the user to see and modify any byte in the entire 64k memory space at any time. The processor can also be stopped or single stepped and breakpoints can be set.

All inputs and outputs are virtual devices that can be drag and dropped in the PC program. Once they are pointed to an address they will use that address to display output or to set input. This makes testing and developing 6502 very quick and easy without wasting time with glue logic or hardware memory mapping.

This project started as a way to understand how the 6502 processor works. Building an entire system with memory mapping and peripherals seemed daunting. There also didn't seem to be any good way to know what was going on inside the processor if something went wrong. So instead I decided to leave the ROM, RAM, and all of the peripherals out and use the PC for those functions so I would have more control over everything.

The first version used an MSP430 that communicated with the PC using a USB UART cable. Fetching or writing every byte every cycle over UART limited the speed to about 100 bytes per second due to the USB latency. Later I added a 128k SPI SRAM to hold a copy of the memory stored on the PC that would sync 10-20 times per second. This raised the speed to almost 20,000 cycles per second, which is only 0.02MHz. Next, I ported the code to an STM32F429 board. This is much faster and can hold all of the memory internally, which raised the speed to about 0.8MHz, which works well for testing code.

The peripherals can easily be dragged and dropped in the program. It is much easier to drag and drop a bunch of LEDs into the program than it would be to hook those up on a breadboard. 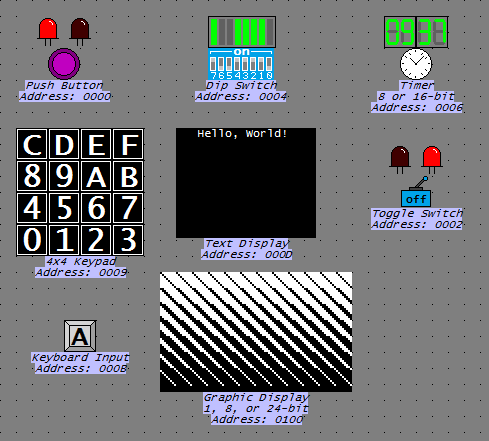 Once the outputs are pointed to a section of memory they automatically reflect any changes in that memory. To output something the program only has to write data in the section of memory mapped to that peripheral. Here is a list of outputs:

This also allows outputs to be configured to do things that might be difficult to do in real hardware: 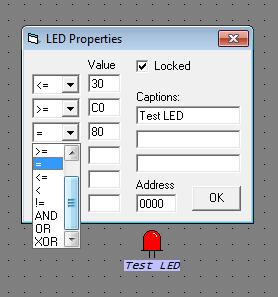 The inputs are also memory mapped and sync with the copy of memory the microcontroller has about 20 times per second. This is fast enough to type comfortably. Here are the inputs:

The timer can be set to regularly update and write its value anywhere in memory. It can work in 8 or 16 bit mode. This is useful for things like blinking a cursor that don't depend directly on execution speed.

To test my setup I started working on a four function RPN calculator with a 10 level stack. It can repeat keystrokes to implement functions like converting from Fahrenheit to Celsius, which you can see below. These functions can also be graphed which you can see on the graphical display in the program. The buttons and selectors are for selecting functions and graphing. 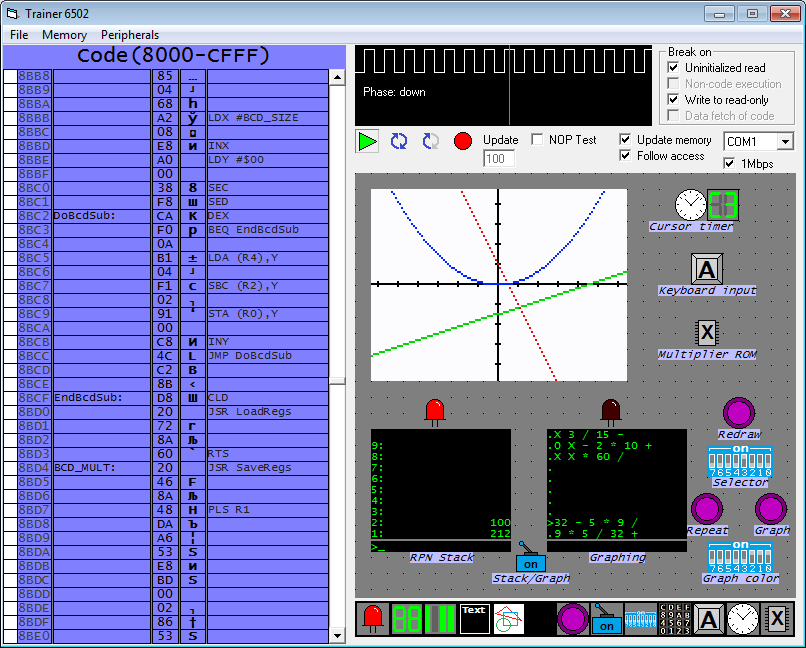 64 megabytes RAM expansion for the TI-99/4A using the Pipistrello FPGA board and a buffer board.
Project Owner Contributor

Retro challenge 2017/04 project to create a TMS9900 compatible CPU core. Again in a month... Failure could be an option...
Project Owner Contributor