Part 3 of the aforementioned project

Part 3 - Even after taking multiple measurements of the motherboard for the design phase, I still did several test fits and do very minor rework of screw holes and parts.
Using a modular power supply allowed the interior to be as uncluttered as possible, since I was already worried about airflow for cooling. after mounting the power supply with its noise dampening gasket, the case insert became slightly tighter in the can and required creation of an extraction tool and soldered on "adapters" to the pull cables; slightly expanded roll pins
Originally, I had made small "over-centering" latches (not pictured) that would also partially extract as it was tilted over the tab I welded in the can, but it didn't work very well. I then found I could build up the welded tab and slip the cable behind it and into the faceplate mount, and it holds well.
more below

It was important to make sure there was no debris or filings to short out the mobo, so I washed the parts and the inside of the can before assembly (I'm sure there was a minute amount of nasty compounds inside the can like mercury fulminate or lead azide).

The only problem I had with the modular power supply is they omitted the CPU power plug to save money, and instead use a PCI power plug for the CPU power and just swapped polarity on the plug going to the motherboard without saying so in the manual. I did this part at midnight, so I used a regular PCI power cord by mistake and wondered why it didn't power up. 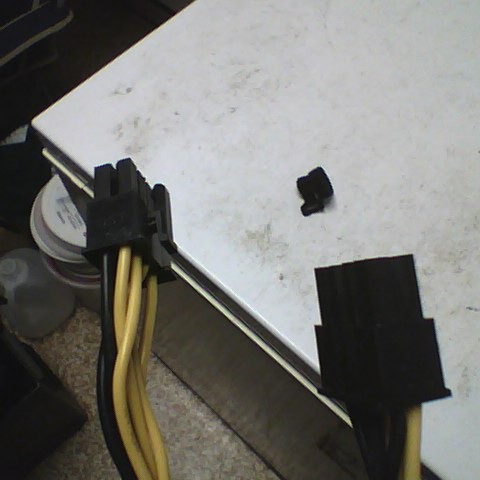 I consciously made this without using any plans or ATX specification papers to see if I could just go with measurements. I was able to, but it required occasional rework at times.

The next one I build, I will find ATX datasheets or something, and use CAD software instead of grid paper.

Also, I will have someone with a waterjet or CNC do a rough cut of the parts, or else have my own proper tools. It's good to learn alternative methods to do these things, but it takes longer (which is problem when you have limited free time) - this is also why the computer was already two years old before being powered on.

This is my first build with new components, as my three previous computers were all used and modified with salvage parts.

I was worried about cooling, but with three fans above the PCI cards blowing in, one larger fan below the BD drive blowing out and the power supply blowing out, the processor rarely goes above 24 degrees C.

How it cools once I've installed dual graphics cards remains to be seen, but I have several plans for light metal ductwork to direct air.

Also, I read Neuromancer for the first time when planning the artwork, so I just had to make an Ono-Sendai logo for it. My katakana isn't great, but I think I got it right.

The most powerful laptop in the world
Project Owner Contributor