I have implemented power-on sequencing for other projects but this was often a weakness point in the system.
This time, I try a new approach which addresses the known shortcomings for medium-sized projects (200 to 2000W)
The cool part: no programming and a direct integration in the electric circuit protection !

This "idea" came on 20160511 and I'll use this someday so it's better that I document everything here.

See the rest at #Power On Sequencer bis

Most low-voltage power supplies are switched-mode AC/DC converters and in some projects, I must use a LOT of them. For example, this is only one half of the 120 PSU that were used for #Mons2015 LED Screen ElectroSuper 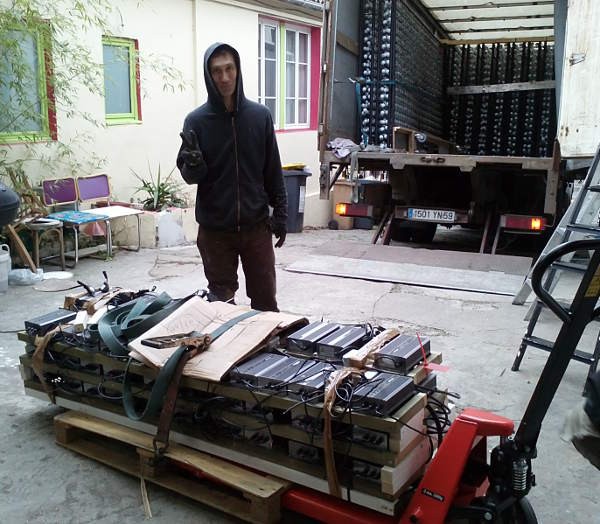 To provide all the required juice, I build distribution systems such as this box: 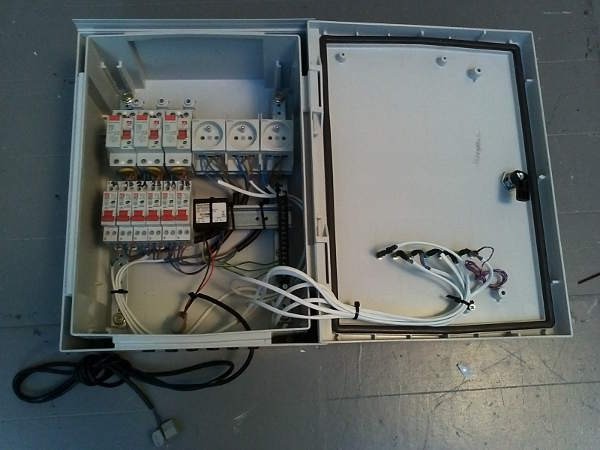 But when you turn the power on, you have 120 PSU drawing insane amounts of current while they load their input capacitors. The inrush current is enough to make everything trip (I'll save you the conservative calculations).

This inrush problem has been addressed from the beginning by adding many local SSR near the PSU, controlled by their respective FPGA boards (a #WizYasep) 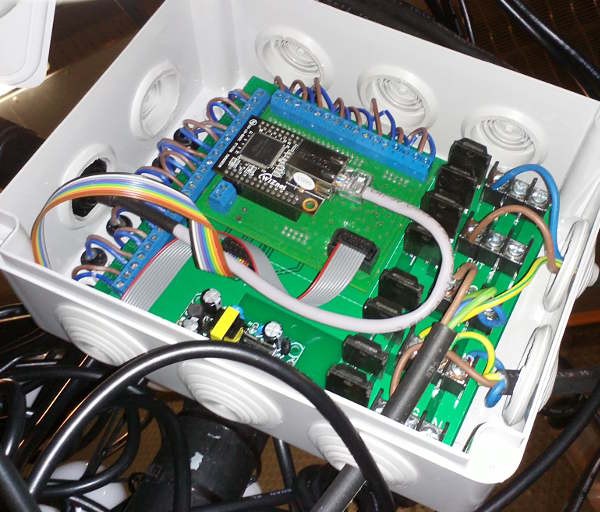 The above image shows a local distribution box that receives 16A and switches 4×4A. This is better but still not satisfying.

The "hack" that is the heart of this project consists in moving the SSR behind the circuit breakers, in the main distribution box. This increases safety and isolates the potential sources of faults.

The other "hack" is that the SSRs are mounted on a PCB that directly plugs into the circuit breakers ! It's much more convenient because this removes wiring, uses less space and is potentially safer.

Yet another "hack" is to go completely "analog": in the past I used programming (FPGA, I considered microcontrollers) but a simple delay line (resistor-capacitor-transistor such as in #Yet Another Electronic Lampyridae) is more than enough !

I just have to solve the power supply issue but a small wall wart is enough.

The system that I'm about to design has:

They are placed on a board that has the shape of an electrical busbar that can directly plug into a row of circuit breakers. But instead of being a normal busbar, each output is individually switched on :-)

Several boards can be cascaded, to prevent simultaneous turn-on of independent circuits.

You can run an optoisolator off AC side using a cap-dropper for detecting missing power.
Use a proper safety rated X-cap.

You can also load up the power supply to overcome the capacitance.  :P

1) I have optocouplers and I must implement a proper POR with brownout.

2) I'll load the power supply, at least to light a LED

3) the supply might be loaded with 3×10mA (from the SSR's internal IR LEDs), I must measure the discharge time.

You can also add power supply supervisor on secondary side to cut off your SSR when the voltage drops to say 4.5V instead of all the way to their minimum voltage.

Some of these supervisors have external reset input, so you can tie the opto output too.  I like TI TL77xx series because it also let you change the time delay..

I might have one of those in a drawer. but only one so not a part I can base a small series upon.

The external input is a nice touch too :-)

I like the bipolar part (TL77 vs TLC77) as it has extended input range and can do crazy things like extending hysteresis and drive softstart.  :)  CMOS verion is down to 1.1V and lower power.