Thor is an Open Source and printable robotic arm with six degrees of freedom. Its configuration (yaw­-roll­-roll­-yaw­-roll­-yaw) is the same one that is used on most manipulator robots that currently exist in the market.

In its upright position, Thor is about 625mm and it can lift objects up to 750 grams.

The main purpose of this project was to design a robot that could be used in universities and schools to teach robotics.With this in mind, the design had to be affordable and accessible. Releasing the source files and doing so under an open source licence was the best option: anyone could study any element of the robot in depth and, moreover, modify or adapt it to their needs.

At Thor's Website will find updated info about this project, manuals, list of materials, the community forum and much more. Visit us!

To develop this project, I have been involved in several areas of expertise:

In order to have a nice accuracy on the moves without raising the price too much, I chose stepper motors for the movement transmission. I had to choose stepper motors with mechanical reduction for the second and third articulation in order to manage the torque generated in these articulations. For the two last DOF I chose smaller steppers with the purpose of reducing their weight.

For the electronics I chose an Arduino Mega as main controlling board. And I designed a "shield" to make possible the control of 7 steppers. I chose pololu A4988 as stepper drivers.

For the transmission of the third, fifth and sixth articulation I have used GT2 Pulleys and GT2 Belts.

Finally, I chose optoisolators and a micro-endstop in order to establish a home position for the first five articulations. Using optoisolators instead of mechanical stop allows it to rotate more than 360 degrees without colliding with the sensor.

As you may have realized, all of the hardware I have chosen is commonly used on DIY 3D printers.

I used FreeCAD software in order to design the pieces of the robotic arm. There are 37 different printable pieces in Thor. For every piece there have been a lot of iterations behind the final one.

Some design solutions are inspired by commercial robots, others are the result of hours of work and others are just serendipitous ideas.

The final design had to be compact and safe. I wanted to hide every motor and every single wire to make it more aesthetic. Also, I designed covers and protections to reduce the risk of entrapment while the user is manipulating the robotic arm.

None of the 6 DOF is a end-effector. There are a lot of commercial and DIY grippers/vacuum/hooks around the web and for each use something different is needed. Instead of integrating a gripper into the design I decided to make an adaptable design making an interface between the end-effector and the robotic arm. This way you have 3 options to include a tool on Thor:

1. You can modify the interface, placing the mounting holes wherever you need them.

2. You can modify the tool, matching its mounting holes with the interface ones.

3. You can design an intermediate piece that fit with the interface on one of its sides and with the tool on the other side.

I like the whole robot, but I'm especially proud of these 3 solutions:

This way, actuating over the two small gears allowed me to place the steppers as lower as I could, transmitting the movement with GT2 belts and reducing the torque generated by the motor's weight. 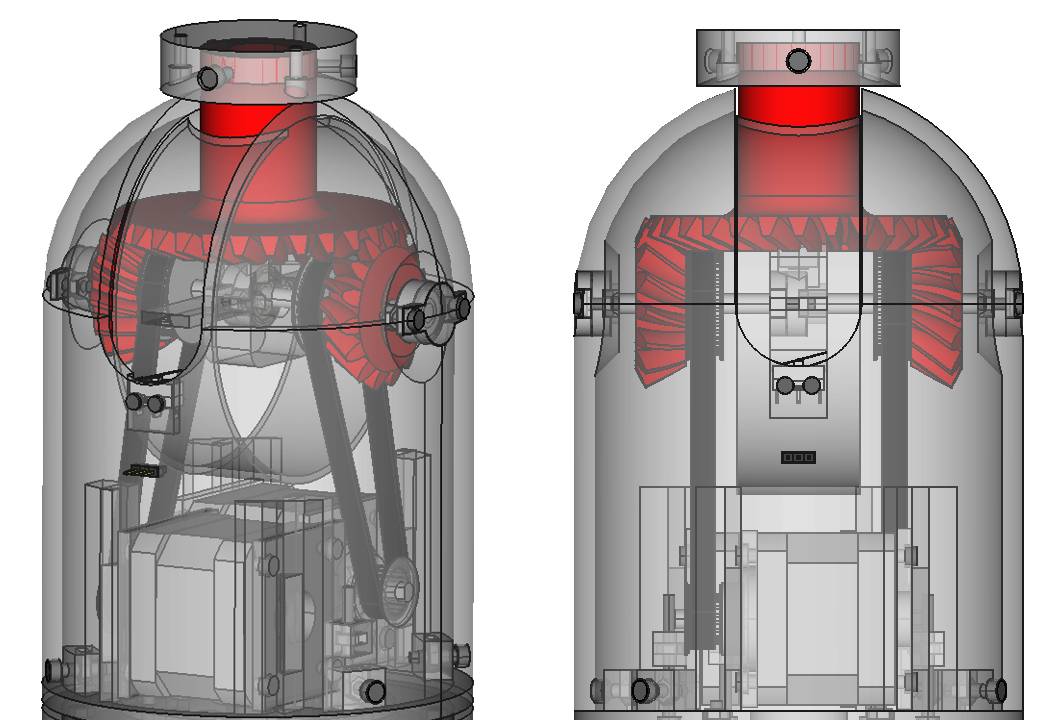 The design of the 4th articulation had an issue, I didn't find a commercial bearing adjusted to my needs. After days of searching, I decided to make my own. Inspired by a solution that some users used for the Ciclop's bearing, I designed the bearing using 6mm airsoft balls as bearing balls. The result was precise, almost without backlash (after some printing...

This is really amazing, I am gonna build one.

can i use this project for my study ?

I need this schematic please, if someone can give me the file I would really appreciate it

can you extend the reach? if yes, did you post the files as well?

This is padmanaban. I going to design 6 DOF gripper arm, can you help me in design:)

Hi all, I see that it is recommended to use 5:18 to 1 Nema 17 34mm stepper motors but I can only find 42mm motors with an overall length of 70mm, is there enough room in the arm to install these motors? I ask before starting to print the arm.

Could you tell me servo motor model?
I have built Thor and now trying operate Gripper(Hs 311 servo motor).
But it didn't operate well.
Thank you :)

The stl file of the gripper part does not exist in the githup folder. Where can I find.

Hi Emre, I'll fix it soon in the Github repo, meanwhile you can get the gripper in thingiverse: https://www.thingiverse.com/thing:1611164

If someone can add me to the google group I´ll appreciate it a lot :)

Hi Ivan, there was a problem with the Google Group but now it's fixed and you should be able to join it!
Sorry for the late reply! I don't know why but the notifications were off :(

Does anybody out there have the dynamics model?

Please add me to the google group.  luiz.csilva82@gmail.com
Thank you

Hi Luiz, there was a problem with the Google Group but now it's fixed and you should be able to join it!

Sorry for the late reply! I don't know why but the notifications were off :(

Hello, did anyone From germany build this very cool Thing? I have many questions! 😅

Could you please post it in english? I tried to translate it but I didn't be able to understand the translation either...

hi, i am very much impressed with this project, and want to learn more about it and build one my self, i'm just missing some part of connections of your module to arduino also the arduino setup for the operation of this robot... if can provide such info it will be great !!

Hi Zubiar, which part of the connections are you missing?

Sorry for the late reply! I don't know why but the notifications were off :(

Can you help me ?

How much Fillament do you need?

It took me about 3 spools of 1kg to print all the pieces.

The 2017 Hackaday Prize
An electro-mechanical system designed to allow a disabled musician to play the guitar with one hand (and a foot).
Project Owner Contributor