After finding the TSL1412 sensor on Mouser I knew immediately I wanted to build my own large format digital camera.

Photography have always been a passion of mine, ever since I got a Nikon 5700 camera in exchange for doing some coding about 10 years ago.

The heart of this camera is the TAOS TSL1412S sensor. This is a linear array sensor with 1x1536 pixels, each 63.5um square. By scanning the sensor in the focus plane I get a monochrome 4190x1536 image. The physical image size is 138x97mm. These numbers give non-square pixels, but that is easily adjusted in Photoshop.

I use an Arduino Due to A/D convert the image and an EasyDriver drives a stepper motor from ITeadStudio. A 2.2" TFT from Adafruit displays the light meter , settings and the image in progress. It also holds the SD-card.

I take full advantage of the 12 bit A/D in the Due. Using oversampling I can get 15 bits/pixel images.

The focuser is taken from an old film enlarger i found at second hand. I made the bellows myself.

It takes a while to scan the image. In daylight/sunlight I get an image in about two minutes (2ms shutter), but in twilight it takes about 45 minutes (200ms shutter).

I also added an adjusteable delay between each column. This way I can take an image over several hours, for example during sunset/sunrise.

Since a 10x100mm IR filter would probably be quite expensive I opted to skip it, giving near-IR images.

Connected: A Wifi module will hopefully allow me to store the pictures directly to an Android phone, avoiding SD-card latency and making it easier to use. By storing the pictures directly in the DCIM directory on the phone I can take advantage of the phone's connectivity and immediately upload them to the service of my choice.

Open: The source code for this project is released without any licence whatsoever. You are free to use it in any way you like. All drawings I made are published as well. But since most of the hardware is hand-built I don't have many of those. See the links on the left side of the page for source code and drawings. 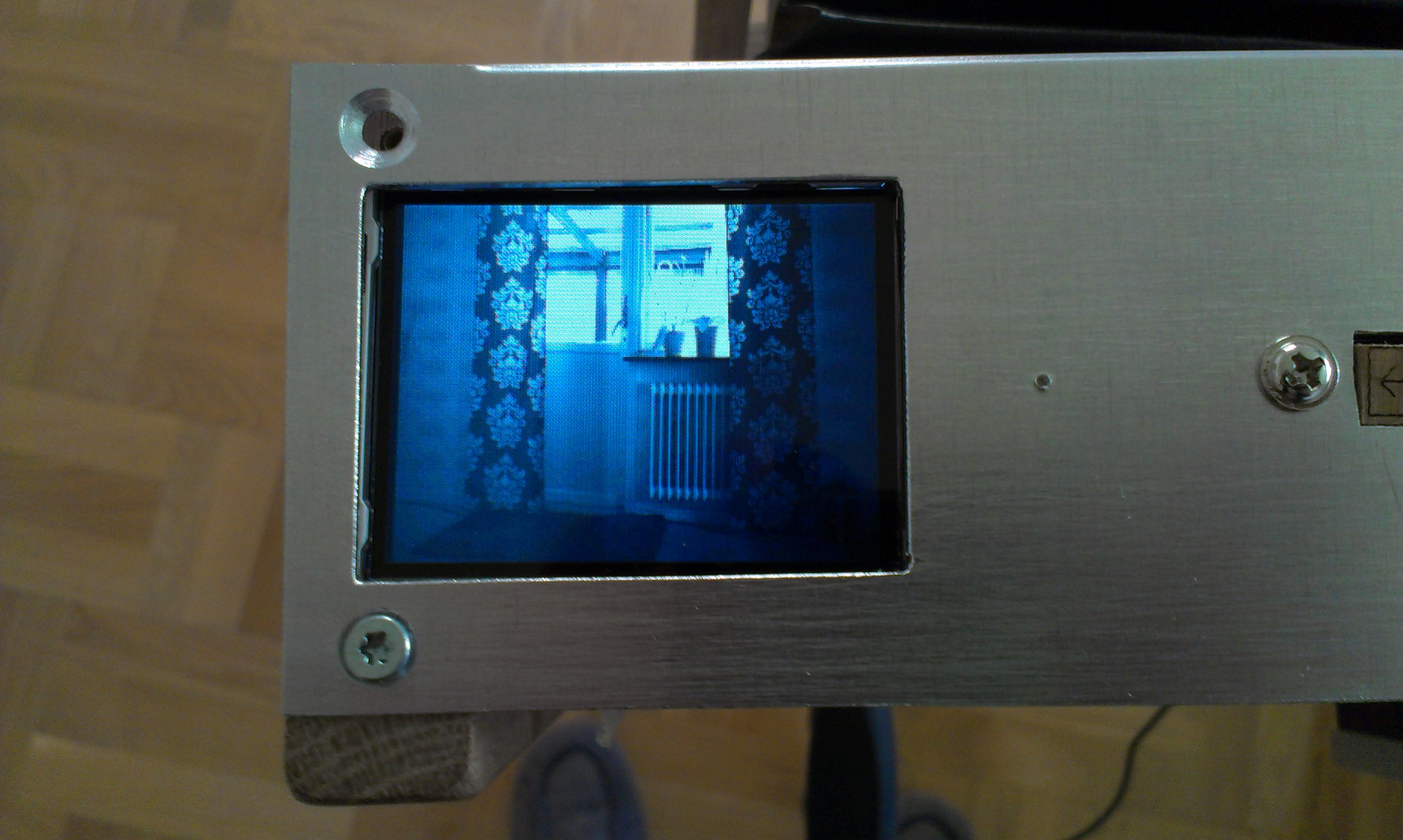 First light! It took about two months to get to this point. 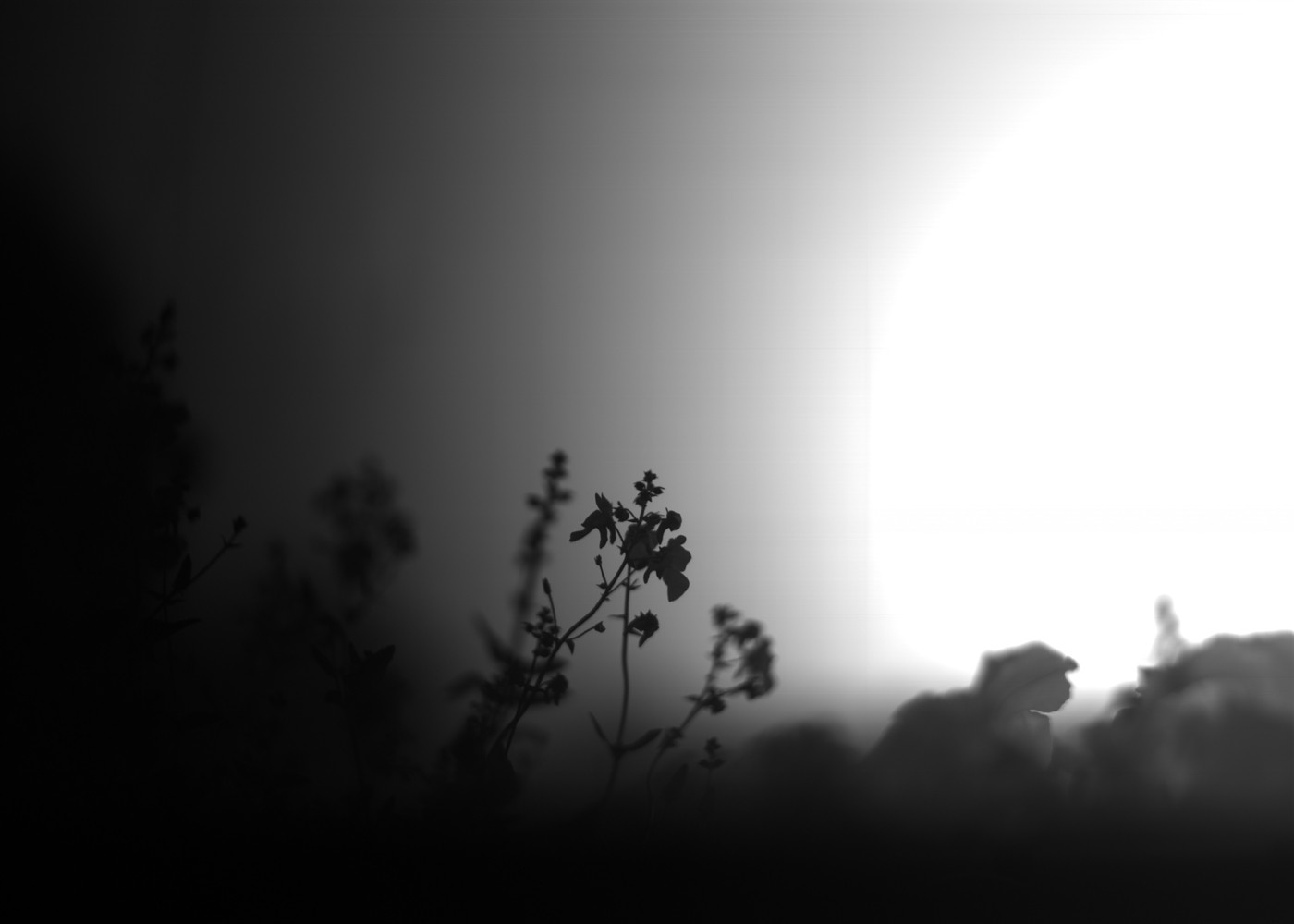 A macro image of some flowers during sunset. Image is scanned from right-to-left. 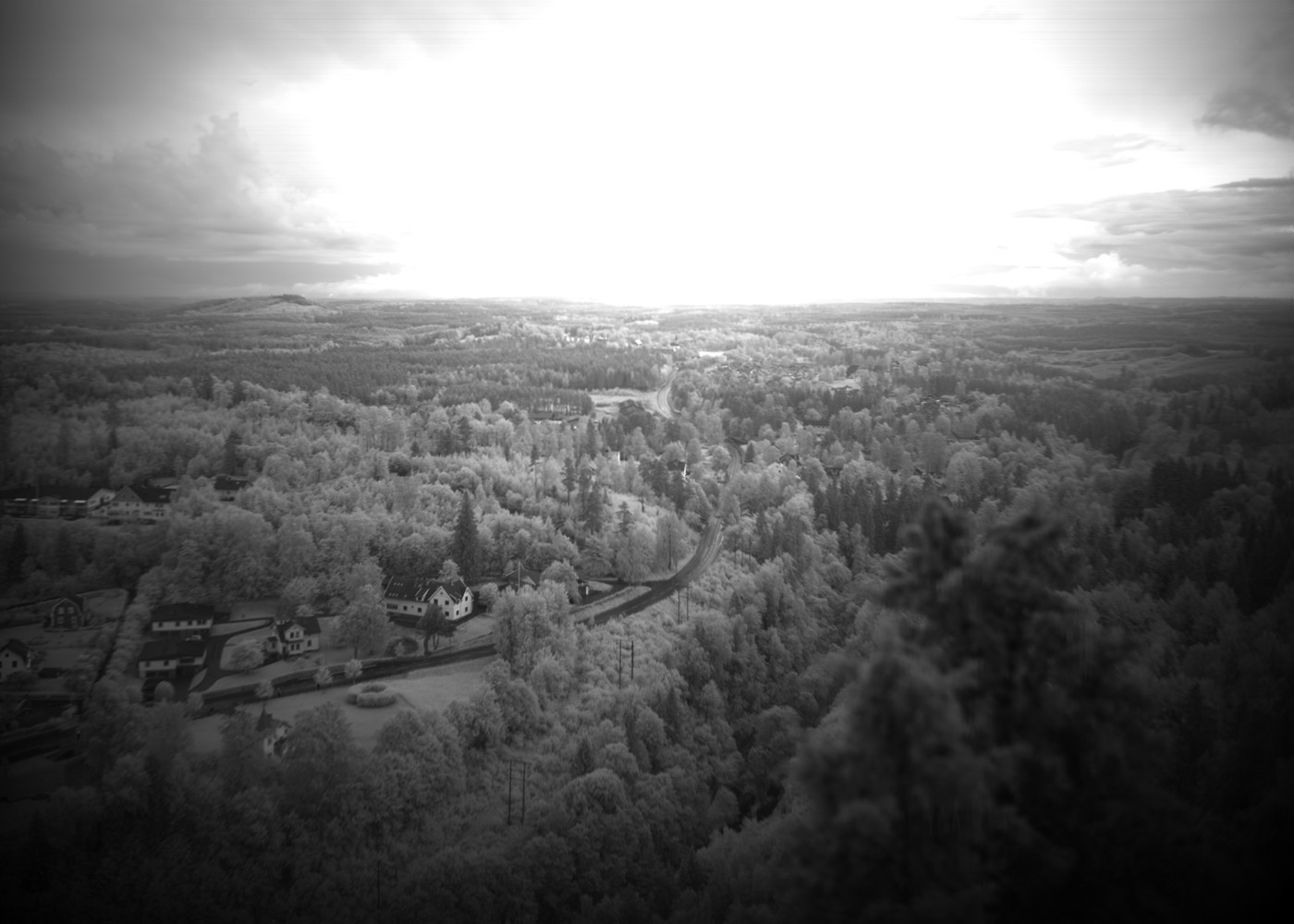 An image from a mountaintop near where I live.

Very nice project, I built one scanner camera out an old lide canon scanner, but this prohect looks very good, since, if I understood correctly, I won't need a pc to scan. Any suggestion on what to use instead of the TAOS TSL1412S  in 2018, as it seems discontinued right now?

I've been working on a similar project using Sony ilx508 linear ccd. It has 7926 pixels over about 55 mm, which makes it a perfect match for medium format lenses. It is also quite easy to drive, requiring only two inputs. As far as I know it was discontinued a long time ago but there're still quite a few floating around on Aliexpress. I'm not sure if there are any large (medium / large format sized) and easy-to-drive linear ccds in production. If you find one, be sure to share with us!

Wonderful project. I know it's been years. Any updates or places to find more pictures from this project?

I built my own scanner camera around an off the shelf scanner:

I like that yours is very smooth looking and not shooting off the ground glass or focusing screen. 12 or 15 bit grayscale must be insanely great. You might - in a future design - incorporate a fresnel lens 1 or 2 cm in front of the focusing plane. Bends the diverging light so it comes in more perpendicular to the sensor. Gives a stronger picture and reduces the vignetting in the corners. Makes the focusing screen much brighter. The 1-2cm distance keeps dust, scratches and the fresnel pattern out of focus for the image.

Back in 1974, with another engineer we made a document scanner using a linear array.

Back then it was a "state-of-the-art" 1x1024 element .   I was in research at Xerox and it went into the first laser fax machine code named "Redeye".  This project brings back memories for sure.

I have an assortment of large format lenses from my 4x5 days and this will be a fun project.

I did this from Yosemite Falls Trail ~ a mile up.  The air was a cold 20 some degrees so there was no atmospheric haze in the way. 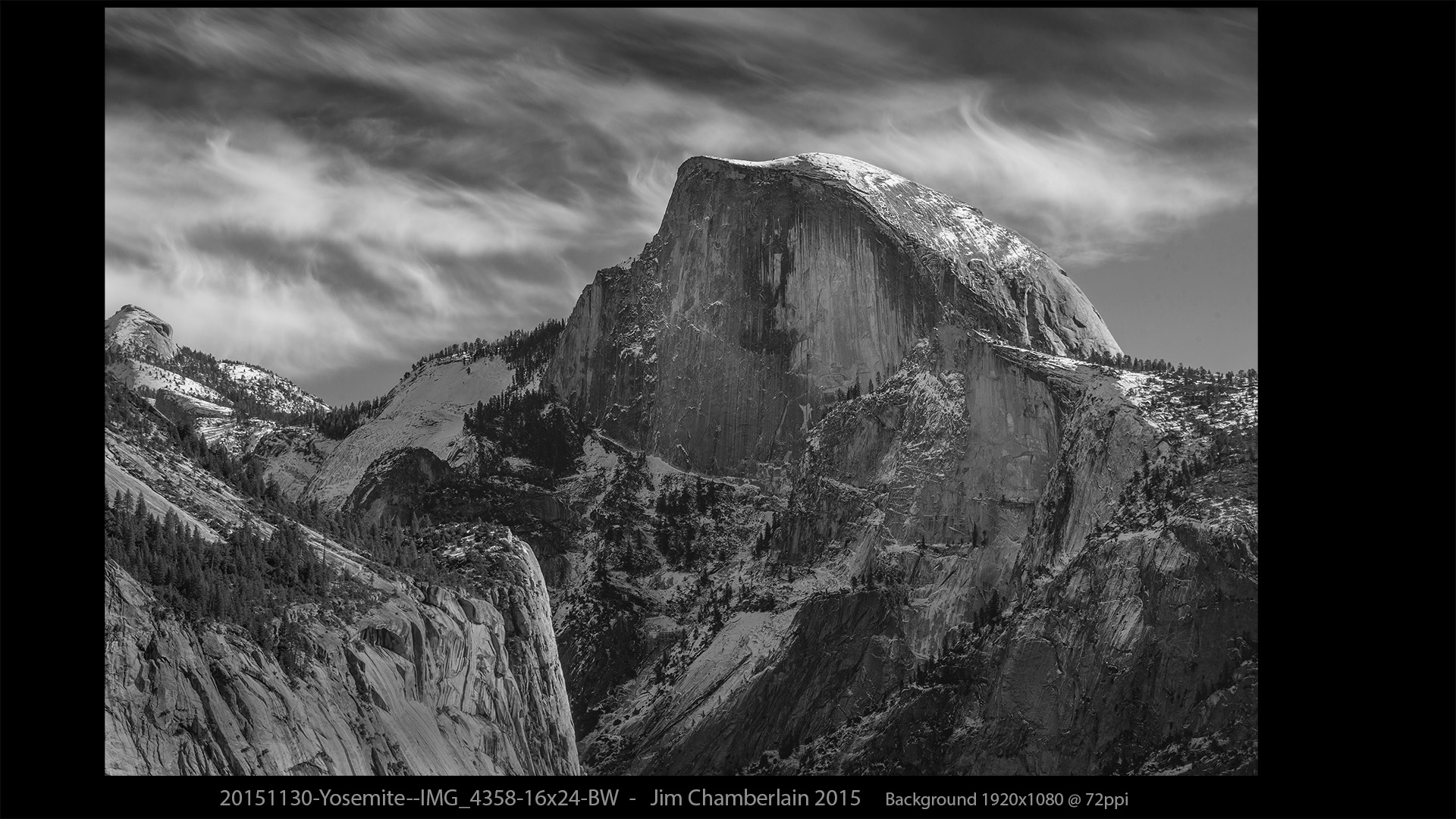 I only have one question about the sensor.

Can you tell me why did you make this decision? The datasheet of the sensor is a bit confusing for me. Thanks!

I Must Say i love Old things Cameras, Phones, Tv's, radios and so forth and what you done taking a old camera and making something new and better is way to awesome thanks :)

Really nice project! What is the F-stop on the lens?

Jasmine Brackett wrote 08/15/2014 at 23:23 • point
Hello Jimmy, now is the time to add a few more details to your project to give it the best chance of going through to the next round of The Hackaday Prize.

Mattimus wrote 07/23/2014 at 22:50 • point
for the exposure, what if you put a spring loaded screen such that the due would only have to fire once and the mechanics of the spring would control the shutter speed? you could rig it up to a mechanism that would tighten/loosen the spring to control shutter speed.

just a thought, not sure how feasible that is.

rifo wrote 07/09/2014 at 17:06 • point
Hello, I have checked the datasheet of TSL1412. It says 1536 x 1 Linear Sensor Array with hold. In a similar project I saw a TCD132D 1024x1 Linear Image Sensor being used.
What is the difference between a linear sensor array and a linear image sensor
they seem to have different inputs
thanks for your help

rijrunner wrote 07/08/2014 at 22:45 • point
Looks interesting. Have been thinking about doing something like this since I heard about Adam Magyar.. http://nofilmschool.com/2014/01/adam-magyar-high-speed-camera-film-series-stainless/ He shoots a very similar system from cars or subways..

S Kilian wrote 07/08/2014 at 21:04 • point
For replaceable apertures, I've liked the LensBaby method of replacing aperture cutouts: a ring magnet around the lens opening and a mildly magnetic paper that likes to just fit itself in the circular front opening.

no idea if it's a patented paper or if it is something that is easy to get in other sizes.

jimmy.c.alzen wrote 07/09/2014 at 08:22 • point
Yeah magnets would work great, I just thought it would be better to have the aptertures behind the lens instead of infront. My thinking is that you get less vignetting this way. Well it doesnt matter if it is patented to me since it is only for personal use and I live in Sweden, where lawsuits are a lot less common.

Felix L. Esser wrote 07/08/2014 at 14:19 • point
Hi Jimmy, I came across your project on DIY photography on would like to report on it for a major US photography website (I'm a freelance tech journalist.) How can I best get in touch with you? Thanks!

LeoM wrote 07/08/2014 at 12:46 • point
Hi !
Great project, I'm developping myself an SLR camera and this could be a great feature to adapt to it and make an DSLR ! ^^
You can have a look to my project here : http://www.kisskissbankbank.com/en/projects/openreflex
Fell free to contact me.

Comedicles wrote 07/07/2014 at 23:17 • point
There was a group some years ago that started a World wide network of small units with a linear array and a camera lens - about like a 200mm lens on a 35mmm camera. The idea was to get a full sky image every 24 hours that was continuously updated. The project kind of decayed as good DSLR for astronomy came along and the members were on to better things.

Have you thought about centering the array and not moving it as you scan a slow moving train? I think that would be pretty cool.

dcgill wrote 07/07/2014 at 21:14 • point
I see your point however whether or not the device is tracked will depend on the maximum exposure time the CCD can accept which may be MORE than that achieved just by allowing the sky to pass across it!

jimmy.c.alzen wrote 07/08/2014 at 12:42 • point
You are right about that. I did some calculations and using the 140mm lens, field-of-view is 38 degrees giving 2.5 hours vertical. Going horizontal we have 2.9 hours. Four times oversample at 5kHz (4*310ms) = 2.8 hours. I think 1.2 seconds total exposure is a bit on the low side. It's doubtful I will see much at that exposure, escpecially considering I have no gain circuit on the CCD output.

OiD wrote 07/07/2014 at 20:59 • point
It's a very elegant project. Congrats on getting it working smoothly!
I recently bought a Due and a 5" display and one of the thing I have wanted to build for a while is a scanning camera.
Why not use an external faster ADC? Or use sample and hold with multiple adcs?

jimmy.c.alzen wrote 07/07/2014 at 21:08 • point
Thanks!
That would certainly be possible, but I like to keep things simple wherever I can. It took only a few days to code up the arduino code using the built-in A/D.