Instantly share mouse and keyboard across computers on any platform.

Hacks that use computer mice, or other ways of moving that pointer!

This project was originally incorporated into my trackball at the Mouse Controller Project. I entered that into The 2014Hackaday Prize, and this device was split off from it.
How it works:
- Connect four USB cables for up to four computers of any operating system.
- Plug in mouse and keyboard.
- No drivers and no software needed.
- Mouse pointer moves from one screen to the next by display edge detection.
An all hardware solution to Synergy* software without the hassles like LAN connectivity (*See link.)

I have had so much fun and encouragement from Hackaday this year! Thank you so much for your time! 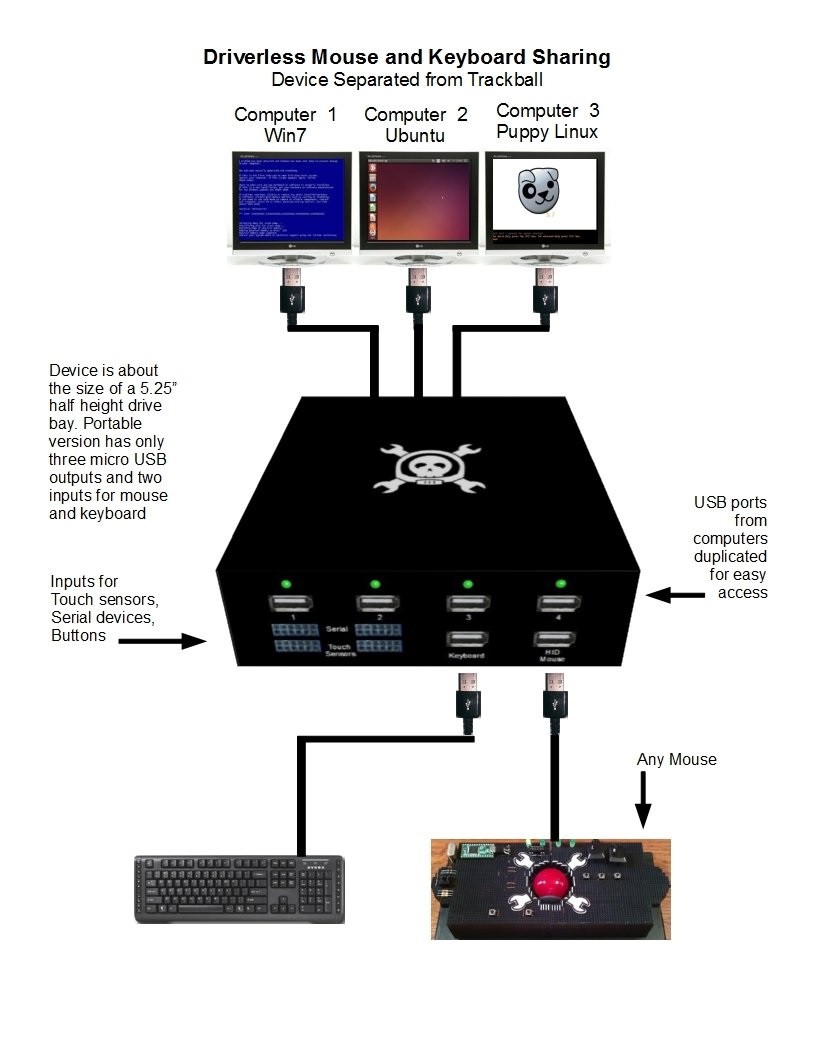 Where I would like to be:
I would have liked to been ready for the Best Product contest, but a wide variety of setbacks kept me from sending a prototype this year.

There are some very short videos, linked on the left side, that show what I have working so far.

A detailed description of what is working is in the I2C Challenge project log.

canavan wrote 05/06/2015 at 21:45 • point
I have a device (an AdderLink IP) that has VGA+PS/2 Keyboard+Mouse inputs and outputs and acts as a VNC server. It has a similar problem, in that it has to match the mouse pointer position of the VNC client to the mouse position on the server, among others to ensure that the entire screen of the remote system is actually reachable. The solution they came up with is to calibrate the mouse behaviour of the system it's connected to. You're instructed to have a plain background in the upper left corner of the screen; to measure the behaviour, the device runs the mouse to 0,0, moves it by various increments and checks the video output where the pointer actually ends up. It turns out that this is surprisingly accurate, in that they detect the type of acceleration (i've seen it detect X11, Windows and MacOS, if I'm not mistaken), and apparently the 1 or 2 additional numeric parameters required to compute the actual pointer position. They still have a button in their GUI to resync the mouse pointer position in case anything goes wrong. Obviously, you don't have the luxury of "watching" the video output to be able to chracterize the mouse acceleration. You could however try a calibration routine where the hardware and a python client work together. Afterwards, the Python client could store the resulting parameters in the hardware.

Amazing that is so accurate. This VGA framegrabbing link on the Had blog (thanks Rogan) was interesting too. It would add a lot of hardware cost, but you are giving me some good ideas! Thank you :)

So for the USB issue, why not do your switching virtually? Use your own hardware to receive and route data from the keyboard and mouse. When a host computer connects, go ahead and create two HID devices for it (a mouse and a keyboard) but leave them idle. When your device decides that computer [x] should be active, it routes all of its intercepted commands to the already-connected USB device. I realize this will likely cause your material cost to increase, but then you can do fun things like duplicate your input to all outputs and your switching time would go away since the computers wouldn't be connecting/disconnecting devices all the time. Also, I've had some instances where the PC would temporarily freeze when USB devices were added/removed and this caused interruptions to other USB connected hardware. Anyway, just an idea.

If by hardware you mean use one PC as a kind of "server" to chain the rest together, then loosing one PC would cause disconnections. I think the HaD blog comment using a "JUC400 Wormhole Switch" (thanks Karl) suggests the same thing. I would like to experiment with something like this and already have a board I can dedicate to it, so I would appreciate it if you could expand on your idea or offer any advice. Thank you!

Not necessarily a PC: you could link 4 micro's together (spi, i2c, etc) where each provides the target computer a combined mouse/keyboard profile. a fifth would act as host to read from the real mouse/keyboard. A protoype could probably be done up with a quintet of Teensy's

That is exactly what I am trying to put together for this weeks 125 Teensy-LC givaway. I have been working on it already. Your advice would be appreciated when I get the project log up :)

An easy cross OS mouse detection solution would be to use pyautogui.

That said one approach would be to use a webcam and gaze detection to control which computer should be controlled, my personal gripe when I used synergy was I was never controlling the right computer.

I think that is exactly what I was looking for! I will try to use that for sure. Thank you so much for noticing my small cry for help. :)

Have you thought about gestures? Stay with me here. Keep moving your mouse horizontally towards the edge of the screen. The mouse will stops horizontally but will have small movements vertically. Is there a way, over time, to poll the horizontal direction and then a number of pixel vertically?

I love the idea of gestures! I would like to work that into the hardware side, once that is all working.

frankstripod wrote 08/26/2014 at 21:29 • point
I don't care to deal much with the USB side. I am trying to keep it simple so that anyone can duplicate the process. My creative hacking will use USB features from other circuits; like the absolute position from a Teensy 3.1 (hopefully), USB to serial from a USB Host Shield, switching from a USB four port switch. So my plan is to save about 2 years of research by taking advantage of circuits that already work. I just want one for me, I doubt anyone else would like its tradeoffs. Thank you for your comment! It helps me define this thing. Good to hear from you!