This project solves multiple problems facing the new x86 console gaming initiatives by Valve, Nvdiia, and Alienware. Most obviously, it would require 3 boxes to cover all the gaming options that x86 gaming promises. Some other solutions have been presented such as streaming from another machine, or dual booting. These options are viable for some, but not all.
For x86 gaming to effectively compete with current consoles, the same plug & play experience should be offered by a single box that TRULY rules the livingroom. This runs not just 3, but as many OS's as you care to add - up to a ridiculous 512. Mouse, keyboard, headphones, & USB all from the controller. Get your exercise elsewhere, since you don't need to leave the couch. Streaming of your game to the controller, additional game screens AT the controller.

The Multiheaded Hydra ran 6 seats of SteamOS (or whatever other x86 OS) but it wasn't a living room friendly size. So the Hydra Gaming Console is 15" x 12" by 2 ½".It's built around an Asrock H77M mini ITX with a Nvidia Quadro FX3800 desktop GPU. Right now it's running SteamOS, Windows7, and Android x86 KitKat. I've also been intending to switch back to VM control via an Android app.

And it hit me that an Android cell phone would probably make a pretty good Game Controller. It has:

Touchpad is your mouse

Keyboard for logging in, etc

USB on the go

And they're CHEAP. My biggest problem now is that there are SO many ways to skin the cat here, designing a controller around a phone is going to take some time. I think the USB OTG offers the best option, sort of like a "spread" controller that clamps the phone and plugs in the end. I have used a USB hub to connect both mouse & keyboard and sent them to the VM. Also a gravis gamepad. I was thinking something along the lines of this failed kickstarter: 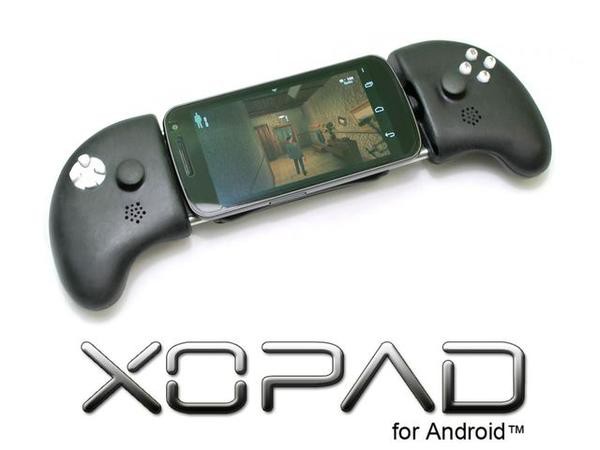 Depending on the BT stack on the phone, the phone can be a HID device. I currently have the wrong phone, so am unable to test.

There are also many ways to emulate a controller on the phone.

There's also the Moga controller, which may be hackable, but I wish it was USB. It certainly works in the Android VM.

So what I have done for now is build a cell phone mount on an Xbox 360 controller, with the Xbox PC Wireless Adapter plugged into a passed thru USB on the host. The cell phone runs a menu that controls the host, selects which VM to run, which one comes up at boot, manage snapshots, and install a new VM from scratch. 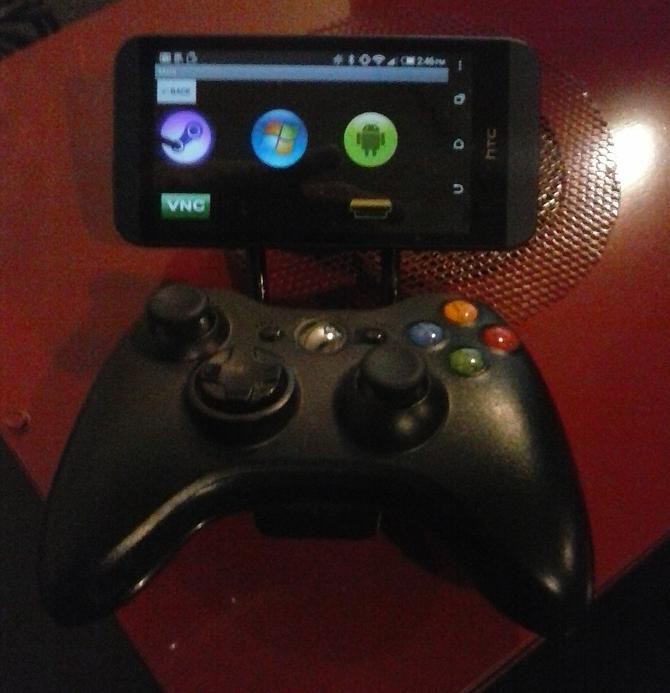 And to make a proper Game Console, I have to display the Menu system on the TV. So, the Quadro goes in port 1 of an HDMI switch inside the Host. A Microsoft Miracast device is in port 2. The HDMI switch is controlled by an Arduino that also controls the Hosts power switch. The cell phone screen is casted to the Miracast, and switching is controlled over bluetooth. I added a 1k resistor from the hot plug detect to 5v (pin 18 & 19) so the Miracast always thinks it's connected . 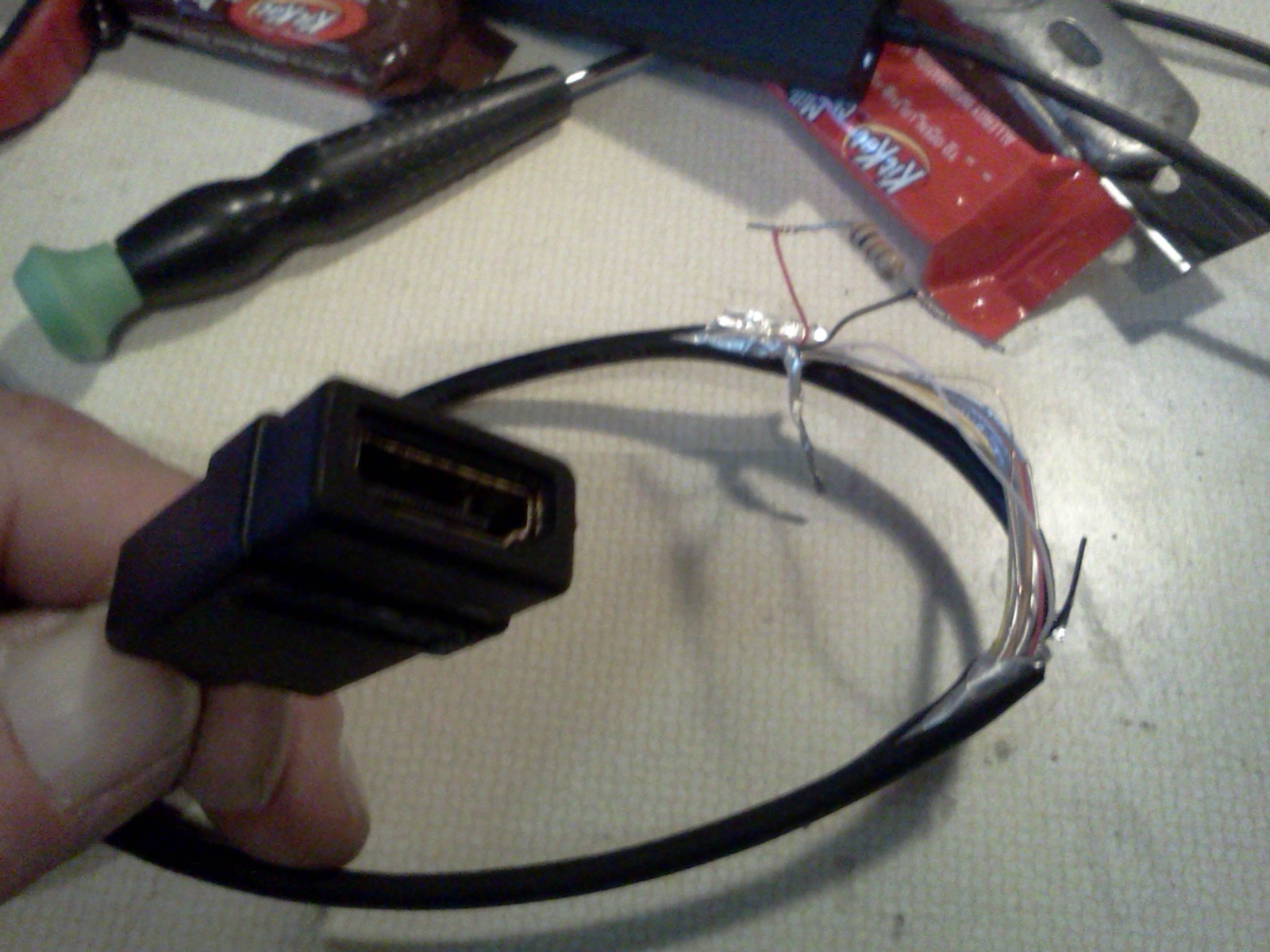 So you power on the Hydra Game Console from the Controller App. The cell screen is displayed on the TV, with a progress bar while the hypervisor boots. When port 5901 is active on the Hydra, we VNC in and can access the bios of the VM, or monitor the txt mode booting (Just in case we end up up in Startup Repair or some other boot prob) . We are also monitoring the Vmkernel.log for the event indicating the Nvidia GPU is active, and then the HDMI is switched to the Quadro.

Play Games, shut down, and the HDMI switches back to the menu presenting other VM's to run + options. Use the cell as a pointer & keyboard. Or plug real mouse & keyboard in the USB OTG. Use the Xbox controller in games.

I also need to buy (or most likely make) some custom cables to bring the designated ports out the back neatly.

Here is a video, demonstrating current functionality. I boot the machine, and switch between the 3 OS's. I play a little of a game in each. All of this entirely from the controller:

I can't seem to reply so I'll post at top. Thanks for the info. Maybe I'll pick up an FX5200 on ebay then. I had tried with a matrox g450 and an old ATI Radeon 9550 or something like that and I could never get the drivers to work properly. I couldn't get a newer 7200gs pci-e to work either but I had hoped PCI devices but I hadn't personally had much luck.

sdjackieXD to you have something like this working on KVM? if so you have build info?

Thanks for the Skull!,

I've read that, I may have mentioned that in my other project which uses a Geforce FX5200 (this works because it's PCI).  I still had my fingers crossed when ordering this Quadro, I find that the only way to really tell is to try,,,,,,

I did try some non-Quadro cards I had laying around and they were no-go.  But  I dug a little bit into how ESXi sees the card, as well as with the Quadro.  They all seem to behave differently, mostly how the GPU memory is handled by ESXi.  AMD cards seem to work the best, but a 4650 is named as such, while a 6450 shows up as "unknown". The Quadro does some funny stuff too - The Android VM only plays out the Quadro when it's the first VM booted. Win7, Win10, and SteamOS all work after.  So if I want to run Android again I have to reboot the box.
There are some low level PCIe settings from the ESXi command line that I played with, and I could make it worse, but not better.

All this leads me to believe some workaround may be possible, but the price for older Quadro's is falling faster than I can hack.

You can mod most normal nvidia cards into quadros... (eevblog forum has a big thread about it).

I have no idea if there are other limitations to nvidia cards with ESXi as I don't have a system with ESXi that supports VT-d but with KVM my old GeForce 210 works perfectly (I haven't tried any other card yet).

I have those bookmarked, I haven't tried it yet. If it only depends on being identified as a Quardo, then it should work. So far every card I have working seems to be handled differently by ESXi. (this is probably why it's "unsupported")

You mention having a FX5200 working in passthrough. I haven't had much luck getting any PCI video card working (except I got an old voodoo (mostly) working surprisingly). How are you running that card? What drivers? Its an old card but I have an interesting in building a "classic" gaming VM with XP and that card is easy to find and would be a good candidate for older games.

I'm just using the Nvidia drivers.  On the other system, not this one.  When you pass PCI devices they ALL go to the VM. So I'm passing the FX5200 & a PCI USB card.

You explained all the little problems and workarounds with PCIe passthrough very well.

It is probably worth mentioning that this won't work with non-quadro nvidia cards as the normal nvidia drivers will not install inside a ESXI VM (they have really bad "bugs" which make them unusable when they detects a that they run inside a VM... :P).

Although I would like to build something like this I currently have to stick to my PC + KVM (with PCIe passthrough ^^) because I don't have the money for a second PC.