When completed, Jack will be able to: 1) Image on an atomic scale. 2) Do limited manipulations of matter on the nanoscale. 3) Be at least as affordable and user-friendly as a mid-range hobbyist 3D printer.

What is a scanning probe microscope?

It's a microscope that builds images of physical things by poking them in lots of places with a probe. Instead of illuminating a specimen with photons and then collecting the ones that bounce back all at once with an image sensor, a scanning probe microscope (SPM) collects the measurements it needs in order to give you an image one by one. While this approach sounds like a step backwards (maybe a throwback to the first scientific instrument - the poking stick), it actually provides many very cool benefits. For example, your resolution is no longer limited by the diffraction limits of light so it is possible to take images of really small things, like atoms! Here are carbon atoms in graphite, as imaged by a scanning tunneling microscope (a type of SPM): 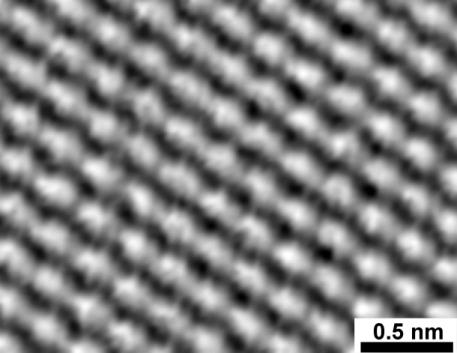 Big benefit #2 of SPMs comes from the fact that you can get really creative with the probe. The image above was generated by measuring the tunneling current between an electrically conductive tip and the sample of graphite. But a different type of microscope, the atomic force microscope, generates images by measuring how much the sample deflects the probe at each point. That is, it measures the force that the atoms exert on the probe at every point in the area of interest. Other probes are designed to measure heat, capacitance, chemical nature, or a host of other properties. This makes SPMs an extremely flexible tool for doing science on a small scale.

The last major benefit is that SPMs are not limited to just looking at very small things - they can make very small things too. To see how that can be, imagine the probe as the cutter on a CNC mill. By allowing the tip to interact with what is under it the SPM can be used to precisely modify nanostructures. For example, IBM famously used one to write their name in xenon atoms on nickel in 1990:

A great deal of cutting edge research nowadays in many fields, like microelectronics, biology, and material science to name a few, are only possible thanks to scanning probe microscopes. They, along with a handful of other instruments, are the Swiss Army knives of nanotechnology. I believe that a great number of our achievements as a species this century will trace back in part to the fantastical ability of SPMs to precisely measure and manipulate matter on the atomic scale. As a result, I believe that their commoditization would accomplish two great aims: 1) Lower the barrier of entry for development of nanotechnologies. 2) Speed our progress towards further technological revolutions.

Scanning probe microscopes are generally extremely expensive instruments found at universities, only operated by crufty ex-industry engineers or twitchy, sleep-deprived PhD candidates. Making them cheap enough to show up on the desks of hackers and makers seems infeasible. But there are good reasons to think it can be done:

Very nice project, how did it advance?. I am planning to build a xy nano-precision stage and trying to get ideas. I was also trying to download the project file, but it needs a password, may I have it?

Very cool project. I like the dual-stage scanner idea, although it might be difficult to get the rigidity and stability required for atomic resolution. Good luck, looking forward to seeing how this turns out!

Thanks! I agree that rigidity and stability are going to be difficult properties to achieve. My strategy for rigidity is to add mass and use flexures cut out of metal or thick plastic to hide material imperfections. I'm also looking into active stabilization, because although it is complicated to design if it works it will make the project much more reproducible (shifting complexity from tricky-to-machine parts into copy-able software & circuitry). For stability I'm going to implement a temperature control system (closed-loop acting on water). And passive vibration cancelling will come from mass & spring (mass from the water used to temp control and spring in the form of an inner tube that the whole system rests on).

edit: I didn't recognize your name and then I looked at your project page. Your scanning tunneling microscope blew my mind when I first saw it and directly inspired my project. Thanks so much for putting your work online!

Sounds good, although the water is probably unnecessary. A closed box with some heaters should do the trick. I bet temperature control will help a lot with stability. Once you get it up and running, maybe you can replace the water with liquid nitrogen :)

The 2015 Hackaday Prize
This is the result of 3,500 man-hours of labor and love, but we need your help to push it forward, HAD community
Project Owner Contributor

Would you like a quality stereo microscope for your hobbies, but you can't afford or justify the cost of a new one ? I have a solution.
Project Owner Contributor

Stereo Microscope For Around $100 !