Up front: don't build this without a proper control system. A vapor phase reflow oven involes liquids and steam (!) at temperatures up to 230 °C. Even more around the heaters and when things go wrong. See https://hackaday.io/project/7495/log/26044-geyser-mode-this-thing-needs-more-safety-measures.

1) I failed at reflowing a 0.35 mm pitch BGA in my infrared/convection oven;
2) a quick look at my and my colleagues' drawers revealed the following:
An Aluminium block with already drilled holes for 4 heaters, heaters with 100W each, tons of thermocouples, and some galden leftovers.

I decided to give it a try!

I wanted the oven to be/do/have:

The implemented design resembles the idea outlined in this diagram:

Evaporated galden can flow to the external chiller, where it is cooled down by convection (forced convection on the inside and natural convection on the outside). The chiller is simply a piece of wound steel pipe with brass fittings brazed on: 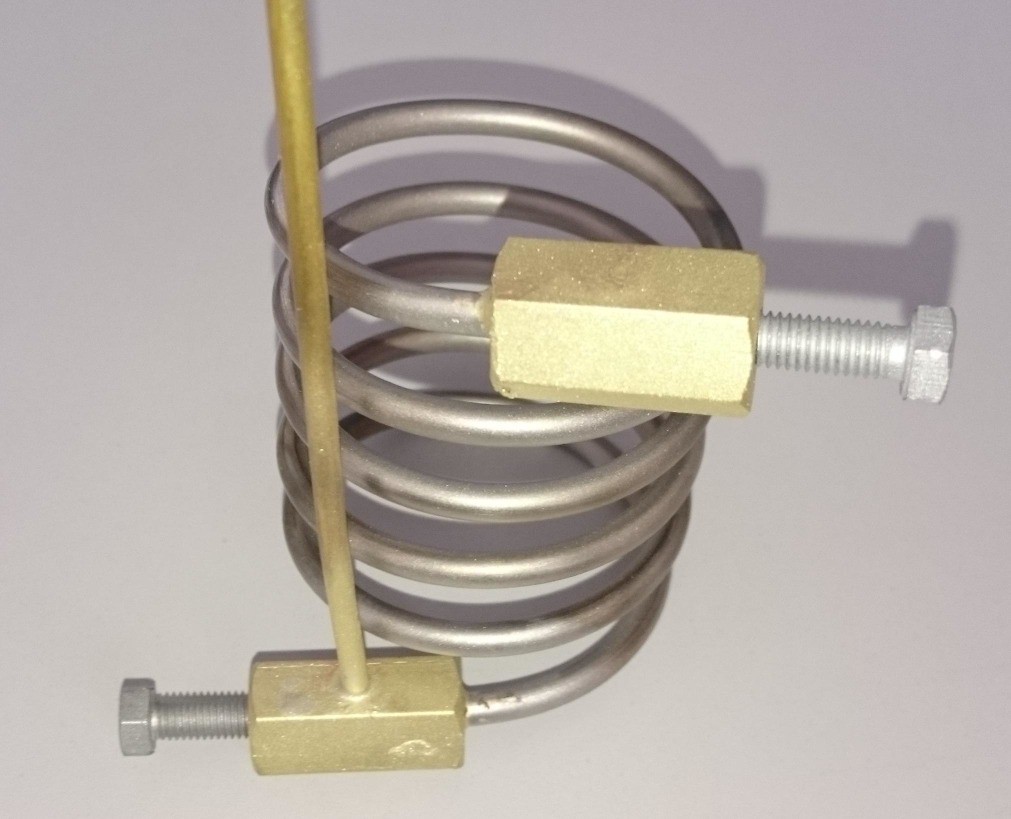 This is the base with chamber, heaters and insulation: 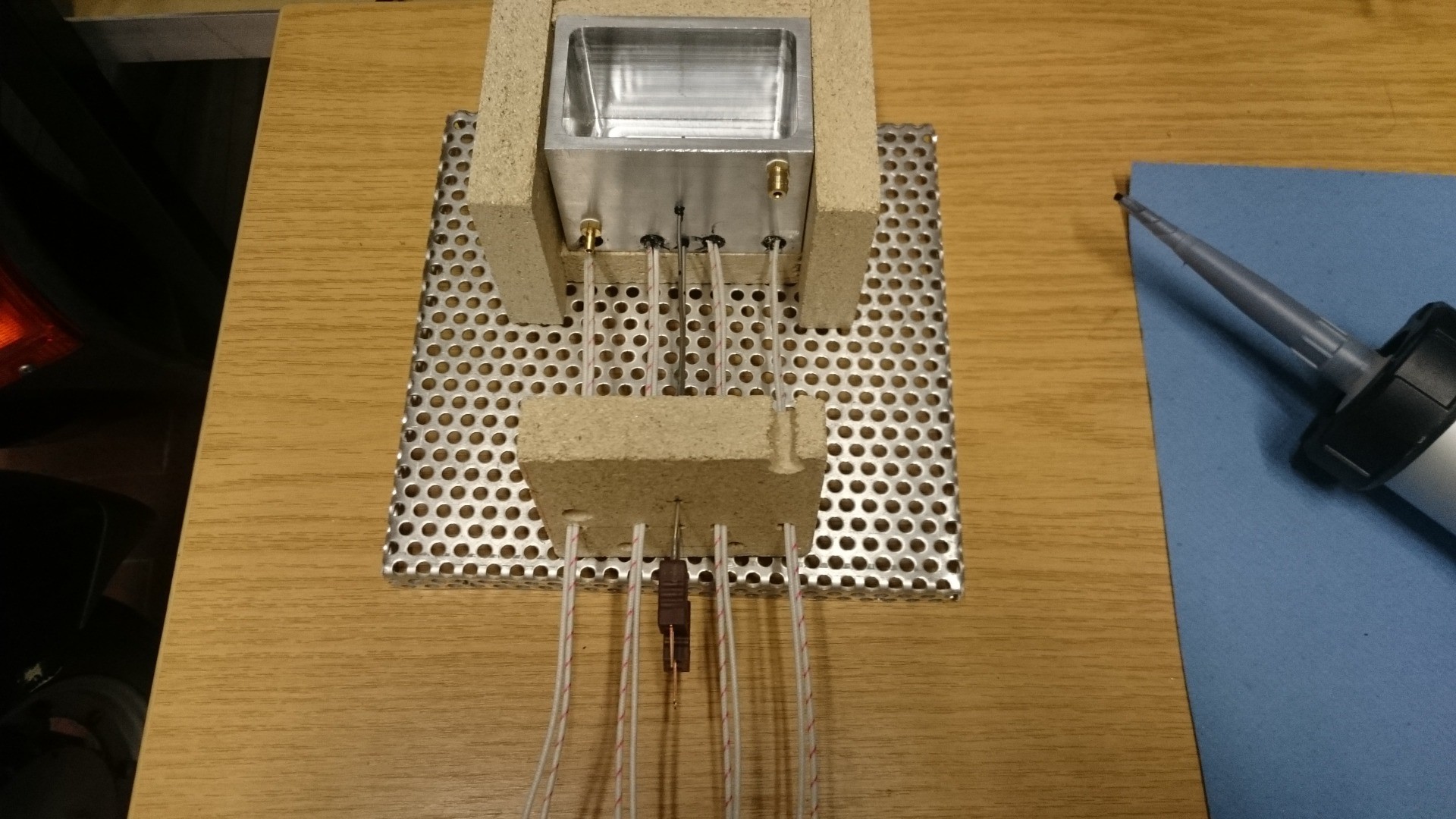 Final assembly with lid, tubes between chiller and chamber, and electronics box:

The whole thing will have some heat losses through the lid and insulation, so some of the evaporated galden will flow right back along the walls or through the vapor tube. Galden that evaporated above the heaters will not flow through the liquid tube because there is no driving force in that direction; the evaporated galden will be driven upwards by buoyancy instead. If the lid does a good job at sealing the oven, I'll also need a pressure compensation between the oven and the atmosphere, which should be on the liquid side.

While galden evaporates, the chiller has to dissipate the amount of heat that was needed to evaporate the galden. While that is the case, the oven has a cozy reflow temperature that matches the evaporation temperature of the galden.

Of course, I also needed a GUI. I chose Qt for that because it now has a serial port class, which makes the code quite portable. It's not finished yet, but it will eventually end up on github. Here's a screenshot of an earlier version: 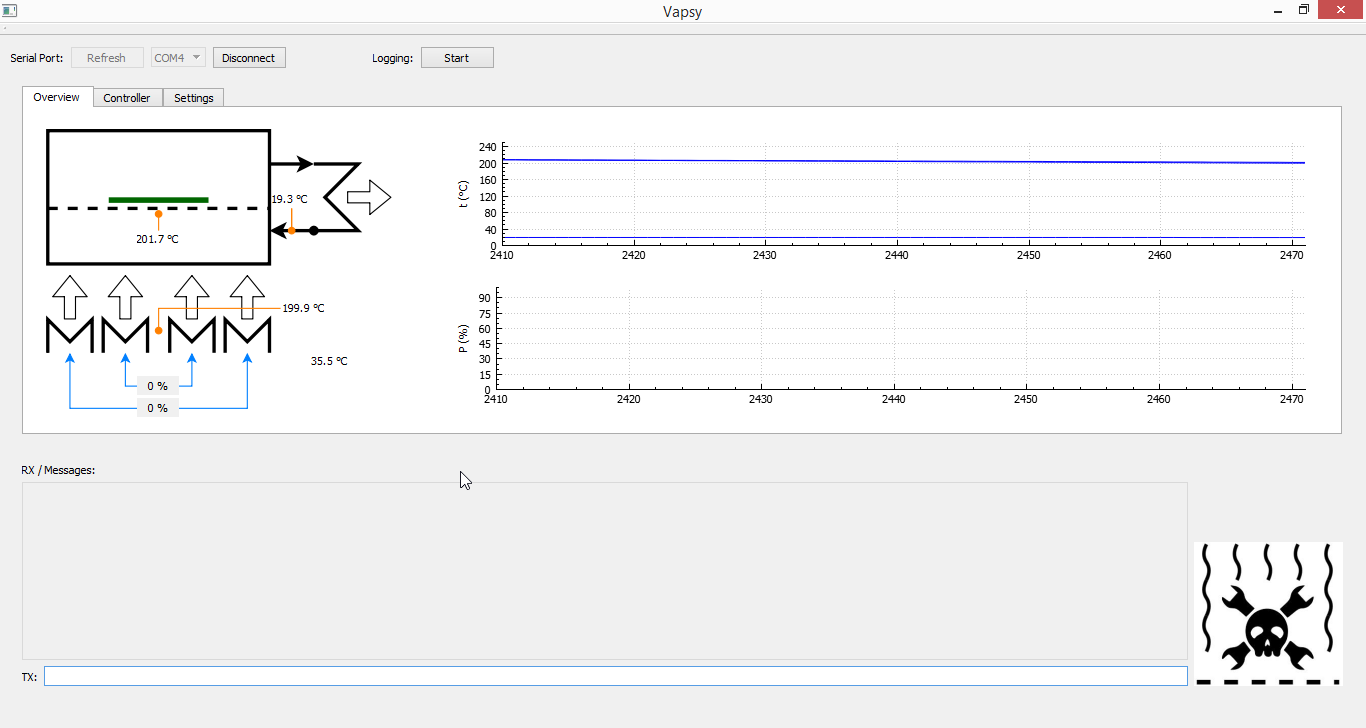 It turned out that the oven doesn't exactly work as intended, but it does solder PCBs. Check out the project logs for details on every step of the build!

dang you are good at that machining stuff!

This is cool, never heard of galden before.  Is the point of this to be faster than a normal air reflow oven?  It seems like any time saved will be lost when you are waiting for the vapor to cool/condense.

the point is that you can't overheat and have very good heat transfer between the galden vapor and the pcb. Cooling down might take a while, but I'll see how long that really is. If it's too slow I'll have to come up with some solution.

the DIY ovem will not save time at all. The THING with galden is that you you can solder small and HEAVY parts like special components with lots of metal, or BGA with megal lid, etc all the stuff inside this thing does heat up uniformly what is almost not possible with any other method. This makes soldering yield much better. Basicaly with galden you can not do it wrong, if it works, its perfect.

Cool, the setup looks great so far.  If it doesn't work make a micro still out of it or something

Stratoplant - a powerplant that cools Earth

I'm building a sauna as cheaply as possible, and the only item I won't be building myself is the heater. It will have regulated temperature.
Project Owner Contributor