Design of a UV printer for making exposures of Alternative Photography prints, direct from a digital image

NOTE: Project has been re-booted, existing work will be largely recycled in development of the new project.

This project is for the design of a prototype direct UV printer for use in Alternative Photography.

The design aim is to achieve minimum of;
- 256 levels exposure
- circa 750 dpi resolution
- bed width of ~400mm, to accommodate reasonable sized prints (pretty flexible on this)

The core of the machine is a Raspberry Pi Zero for data processing and control, coupled with a Arduino Nano 3 to act as an I/O expander on the print head. Exposure will be made with a UV laser and 8bit programmable control system for the output power.

A number of the component PCBs will be broken out to separate project pages, with all of the data required to reproduce them. Please see the links below, or my other projects.

This device is envisaged as another tool available to print makers, not as a replacement to the many existing ways of making prints.

The printer consists of the following parts; Data processing & overall control, a pair of stepper motors to control paper feed (rigid base board carrier) and print head translation and finally the print head itself. In order to attain the desired image resolution, the print head spinning mirror will scan a width of roughly 5mm, to generate a strip similar to that from an inkjet printer. The strips are then built up to form the completed image.

This is the current layout for the various modules (continued below the break). 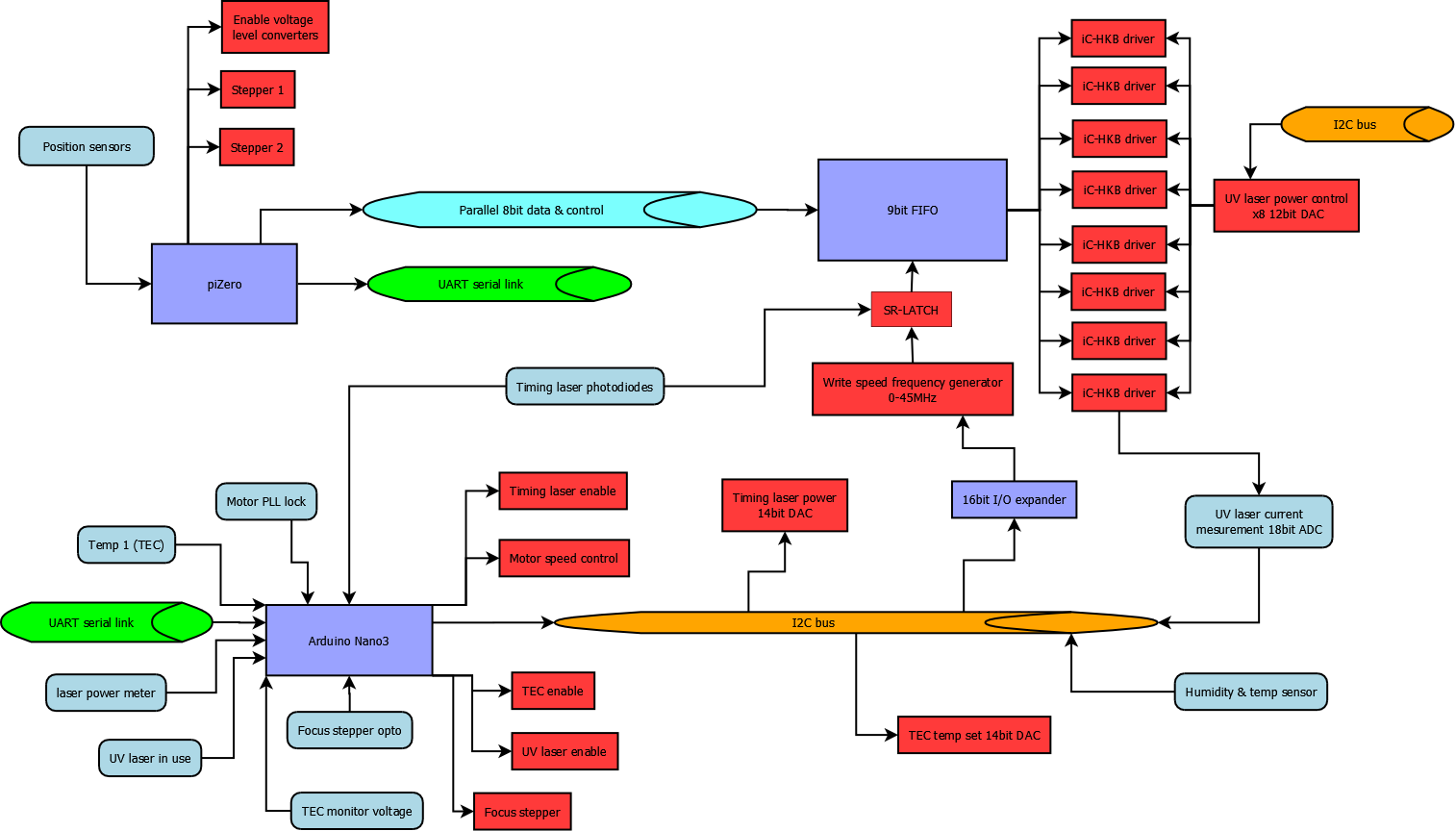 The Iron based photographic printing (Siderotype) process dates back to the Herschel Cyanotype, better known as blueprint; which uses the sensitivity to UV light of specific Iron compounds to produce a print. There are numerous other 'alternative' photographic processes many of which should also be suitable.

However printer ink is designed for visible wavelengths and its response to UV wavelengths is variable enough between batches to require repeated time consuming calibration. The transparency film and inks are also fairly costly. The aim for this project is to remove them from the equation, and thus simplify the process from finalising an image to being able to process it. At the same time, allowing full scope in choice of chemistry and media.

I've had questions regarding using this method with other printing chemistry methods such as tintypes. Any chemistry that is sensitive to UV and does not have a very short life-span (wet plates may be possible with humidity control) should be viable. The more sensitive the chemistry, the faster the process should print, up to the limits of the electronics; laser power/signalling speed trade off.

Hello David,
the project is very interesting! Just to understand some features of the machine: is the speed of the print head constant? how many mm / sec? I understood that the power of the laser is controlled with the PWM technique, at which frequency?
In your opinion, is it possible to try to achieve something similar only with an Aruino controller and a scan line by line, without mirrors?
Thank you for your attention, congratulations on the project!

Yes, as I have progressed i've come to realise that I need to use a CPLD/FPGA with RAM in the head to get the data rates required. I'm progressing with what I have designed to date as I can run experiments with the laser and log conditions etc. before moving on to the next iteration.

I will consider the plot style, it will simplify some aspects, and as this is using a base board to secure the paper anyway, the footprint required when printing would actually decrease.

As with these things development funds are limiting factor, so I need to make the most of what is done already, before moving to the next cycle.

Hello, nice project, great efforts, but what I didn't understand was why you have so many (misterious to me) "IC-HKB driver" blocks in your scheme ? Probably you control the LD current for each pulse ?

I ask, because I have my personal, not public LASER exposer project where I developed my own LD driver (targeted to work at 6 MHz/40..450mA) w/o so much complexity - it has just DAC controlled precise voltage source, sensing resistor for checking the current before each scan-line and one dirt cheap 20 nS,push-pull,bipolar MOSFET driver to switch the diode on/off.

I don't control gray levels, but if I had to, I would use the ink to integrate between N consecutive scans, hiding the "exposed enough" points and tunning the power per scanline. Or is your ink so sensitive that 1 pass (at what mirror RPMs? ) is enough ?

The IC-HKB laser diode drivers are 1 per bit, and allow the levels to be individually tuned. So for the 8bit code they are enabled as required for each pixel as the scan progresses. So the laser output power can be controlled by sinking the sum total of the drivers.

The chemicals are sensitive enough that a single pixel exposure is sufficient.

I just want to lend some supportive words; I had a similar idea some time back, so of course I think this is an excellent project. I never pursued my idea beyond a sketch in a notebook, so I wish this project all the best.

Looks amazing. Would be interested in a kit should it become available

Looks amazing. Would be interested in a kit should it become available

Fantastic project. Please mark me down for a kit or assembled unit if available, I would definitely love to get one.

Thank you for your interest. All of the information to re-create the prototype will be made available here. What I would like to do is use the prototype to evaluate what is actually required and undertake a second round of design / optimization to reduce the component count and cost of the materials / identify sources for the less off-the-shelf components. At that stage it would be possible to consider kits/assembled units.

What an interesting project! It's a bit beyond the limits of my understanding and capability on the electronics side. What's a ballpark price range for all the components, and would you be interested in selling to the public at all either as a kit or as an assembled unit?

Thank you, price range is too early to gauge, I need to get the prototype developed and working before evaluating where parts can be simplified / alternative components used. If there is the interest then i'll look at the options available.

Reading the exposure calculations, would 2.6s per square inch be a reasonable estimate of print speed?  Any estimate of per page operating costs?

Somewhat slower unfortunately, spot area is circa 111um^2  with an exposure time of 2.62us, which converts to 0.066 square inches per second. The limiting factor is laser power and wavelength. Wavelength has a big influence (ideal would be around 350nm) on the chemistry - which is inherently slow, and part of the reason these processes died out.

This machine will be much slower than current process of print transparency negative on inkjet, make exposure, process. But on the upside, being able to locally control the intensity and to a degree the duration to a much greater level than can be achieved with a printed negative. The repeatability is then based solely on the chemistry and media choices, and not the whims of the printer ink suppliers.
Operating cost is massively dependent on chemistry and media (paper) choice, you can go from Cyanotype on newspaper (peanuts) to platinum on Arches Platine (dollars/pounds per 8x10). In terms of making an exposure, total electrical power should be in the low 10's of watts.

We've been waiting a long time for someone to post the plans of a working LiDAR. Is it really going to happen?
Project Owner Contributor