Starts April 25th - Ends May 30th / You’re an independent thinker, a troublemaker, and have no respect for the status quo.

The SunLeaf is a wireless sensor module for remote sensing applications. SunLeaf will be geared towards plant health and environmental sensing in the areas of climate, agriculture, air quality, and water quality. The module also aims to be cheap for widespread adoption and scaling up deployment. SunLeaf also uses Seeedstudio grove connectors giving it a wide range of existing sensor hardware to utilize cheaply. The module connects to a PC over USB to be configured or the kindsof sensors it has and its given application. The data sampled by the module is sent to an MS Azure cloud storage system where the data can be viewed in a web interface behind a user login. The SunLeaf is a wireless sensor module for remote sensing applications. The module is solar/battery powered, low power, connected via WiFi, low cost, and highly scalable. SunLeaf interfaces with several variety sensors, samples, and transmits the data to the cloud. Data is viewed through a web interface. The SunLeaf module intends to be a solution for many remote wireless sensing applications, such as plant health, agriculture, monitoring pollution, and monitoring climate.

SunLeaf is a wireless sensor module for remote sensing applications. The module is a simple low power device that interfaces with sensors and transmits that data to the cloud. The SunLeaf hardware makes up a rather complex printed circuit board. The brains of the device are an ARM Cortex M4 microcontroller and an ESP8266 module. The ARM interfaces with the sensors, and is the general brains of the device, the ESP8266 acts as a dedicated WiFi modem and interface to the web. SunLeaf will be able to perform firmware updates over the air. Sensors connect to the module via SeeedStudio Grove sensor connectors, SunLeaf accepts up to four UART, I2C, and analog/GPIO variety sensors. Module power is supplied by an onboard lithium ion battery, of which is charged by an onboard charge controller via solar panel or USB. Configuring the module for a given sensing application is performed by connecting with a PC either over USB or WiFi. The data logged from the sensors attached to a SunLeaf module is logged into https://thingspeak.com/ channel. 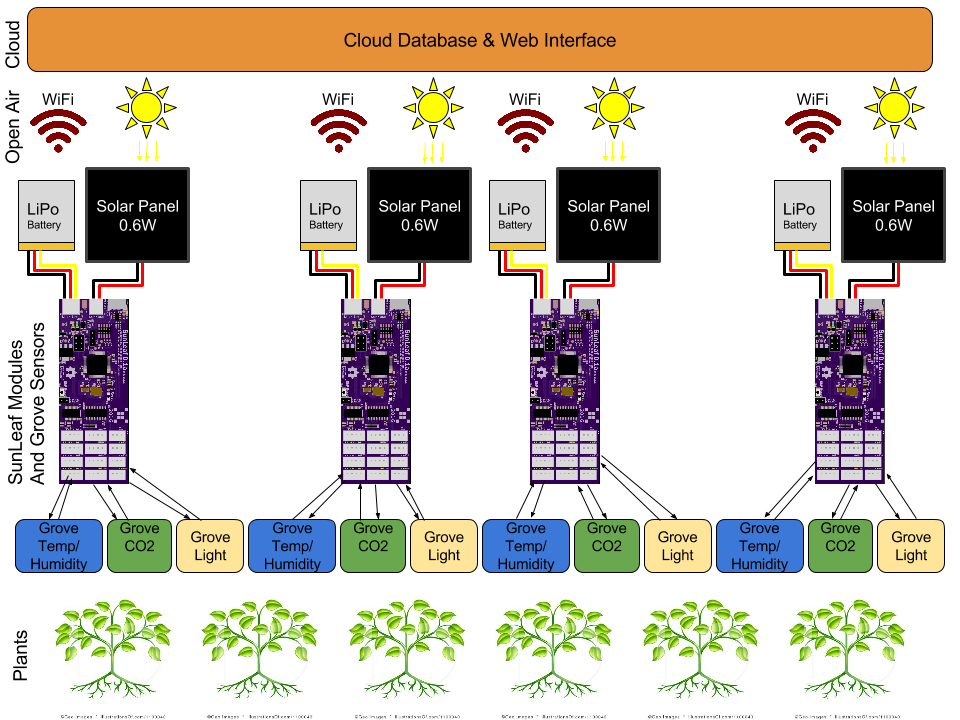 SunLeaf has roots dating back to HydroPWNics in spring 2015. Originally SunLeaf was going to be a redesign of the sensor modules and module hub as a standalone board. A module for interfacing with both digital sensors and analog sensors transmitting it over WiFi. Just being able to interface sensors and transmit data wirelessly wasn't enough, so the ability to run off a solar charged battery was added as a core feature. Solar power is an important feature because the module will be self sustaining also it makes the project innovative being one of the first solar powered sensor modules of this kind. All those features packed together made the module capable of much more than monitoring plant health and the environment. In short SunLeaf is a solar/battery powered pic power wireless sensing module for all wireless sensing applications.

SunLeaf has its roots in hydroponics, given that it is an evolution of the original hydroPWNics project’s electronics. In the application of hydroponics SunLeaf would be employed for monitoring the environment of the plant grow room. Multiple SunLeaf modules would be deployed along with a multitude of SeeedStudio Grove temperature and humidity modules. Additionally a single SunLeaf with equipped with Atlas Scientific (https://www.atlas-scientific.com/ ) pH, dissolved oxygen, electrical conductivity, temperature, and ORP sesnsors, these sensors will allow precise monitoring of water quality and with software monitoring of the nutrient content of the water. The same SunLeaf in charge of water quality monitoring would also be setup with additional hardware for controlling pH and delivering nutrients to the water supply. All SunLeaf units in the grow room should be able to run off excess light from the grow light units.

As mentioned in the hydroponics application SunLeaf also has use in water quality monitoring and management. The application is not limited to hydroponic water monitoring. Another application is pool water quality monitoring, make sure there isn’t too much or too little chlorine in the pool. A SunLeaf would be setup in a waterproof enclosure with the right probes with the solar panel on top, it would just float in the pool and run of the sun. In some parts of the country some folks do have access to water utilities provided by their town, in this case they have a water well that...

please update me the cost of the hardware .

Hi Adam, it's a pretty cool project and congrats! I have a similar project to build a device capturing environmental factors such as: CO, Light, Noise, Dust, etc. so I'm wonder if SunLeaf V2 is released yet and available for sale? I understood it's an open-source project (I love it) and I want to help you out. Thank you!

Congrats on being a winner for the Citizen Scientist portion of the Hackaday Prize!

Great project. One question is why are you using an LDO instead of a more power efficient DC/DC converter?

We are using an LDO instead of DCDC converter to protect the ESP8366 ESP-02 module from noise since its an RF module. Also the system battery is going to be 3.7V and the power system onboard is 3.3V so we are only dropping the input down by 0.4V.

The 2017 Hackaday Prize
A Solar powered WiFi development platform, based on STM32 and ESP8285, a descendant of the tech behind SunLeaf
Project Owner Contributor