2018 Hackaday Prize Achievement: You project is a blast from the past! Retro looking projects or projects using actual old parts.

While discovering the amazing world of germanium transistors during the germanium clock project, I came across high-speed germanium transistors (AF138, AF200 then AF240). At the same time, I examined ECL gates and the two concepts collided in my brain.
Then, I found Dieter's experiments (http://6502.org/users/dieter/decl/decl1.htm)...
Given that a Cray-1 is mostly a steaming pile of (N)OR3 ECL gates (and 1024-bit latches), it became obvious that it is possible to design a rather fast computing unit (ALU ?) with germanium transistors.

Here, I'm scratching a "proto-computing" itch that is rooted in the 50s and 60s, as explained on Wikipedia: 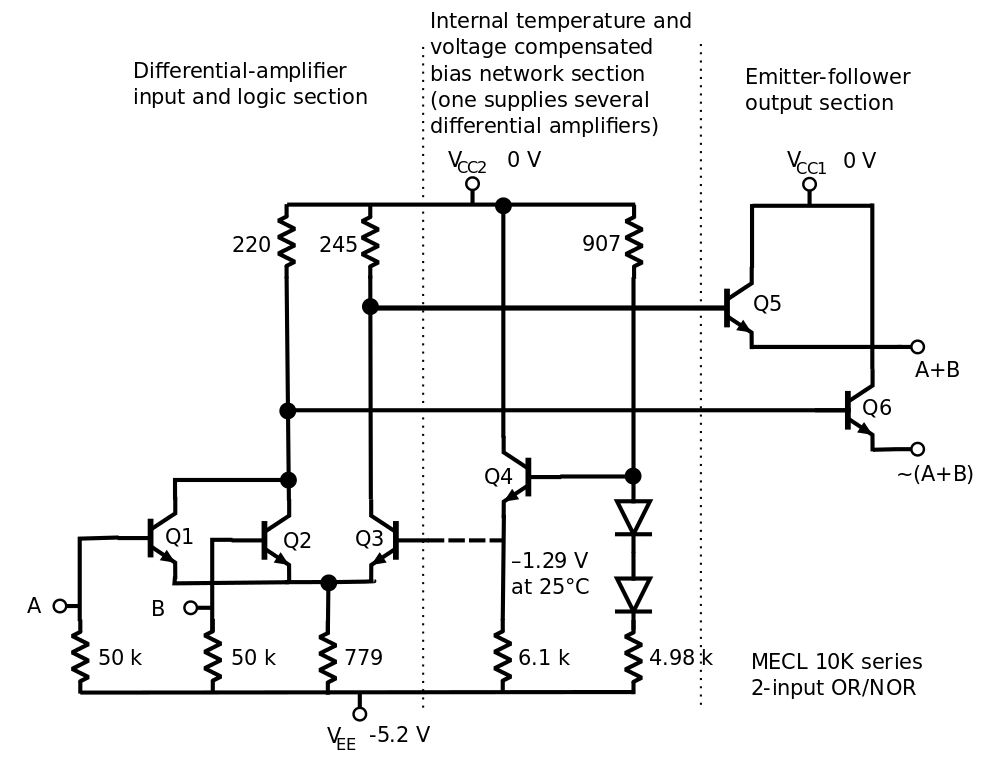 Another version (with significantly different resistor values) found at http://digitalbyte.weebly.com/logic-families.html 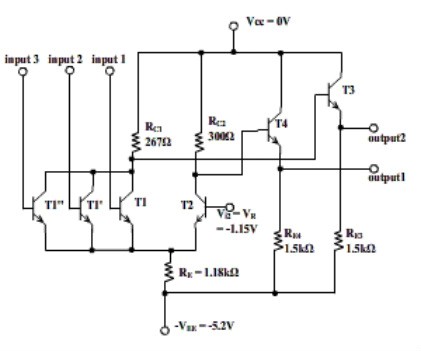 Here, silicon NPN transistors are used but ECL was invented around 1955, when silicon transistors were not really working (and PNP was the king). This means that there must have been ECL circuits with Germanium PNPs.

Back to 2016: my friends here play with discrete transistors, mostly with DTL circuits: #AYTABTU - Discrete Computer, #The T-1: A discrete 8-bit Stack Computer or #Germanium Calculus use pull-up resistors and reach a few MHz.

Now, I have come across a supply of PNP germanium transistors, mostly for analog and radio applications:

With >35MHz transistors, it must be possible to create pretty fast gates, no ?

The 7090 used germanium alloy-junction transistors and (faster) germanium diffused junction[5] drift transistors. More than 50,000 in all.[6]

so YES there was ECL with advanced Germanium ! "Drift" technology was one of the last before Silicon took over (and powered CDC's 400K-transistors behemoth)

This means I won't be limited by the AF138's low speeds !

I found that ACE vacuum tube computer used Cathode-Coupled Followers as a base elements of the circuit and was the fastest computer at THAT time.

That for remind me about ECL.

I want to try CCL(huh?) logic gates to get the fastest vacuum tube computer ever :)

In http://www.quadibloc.com/comp/cp01.htm you can read:

"There are many other possible logic families. For example, in the IBM System/390 computer, a logic family called DCS was used. A DCS gate appears almost identical to an ECL gate, except that the complement of an input bit goes to the other arm of the differential amplifier instead of simply having only one transistor there with a reference voltage."

A few days ago I was considering this topology... I'll have to try and see if/how I can make interesting things, combined with x-dotting...

Have you noticed the similarity between the ECL (with the output emitter follower) and the logic gates used in Colossus? A big advantage of the complementary outputs is that the whole gate draws the same amount of current regardless of the state of the output, so puts less noise on the supply.

do you have references, schematics ?

In the old days (50-60s) they used to specify using a pair of needle nose pliers or forceps clamped on the wire between the solder joint and the transistor to protect it from the heat.

They make clip on aluminum heatsinks for this purpose. Just clip it to the lead you are soldering a bit above the joint. Should be readily available on ebay.

I seem to remember using crocodile clips. None of this wimpy buy from eBay. 😉 Haven't needed them since changing my addiction towards Si.