Reducing Ghost Gear:
Up to 10% of the world’s ocean plastic comes from lost or abandoned fishing gear. This poses a threat to large whales (the Red List estimates that 45% of all threatened marine mammals are impacted) and small crabs (NOAA estimates that there are 145,000 derelict crab pots still “fishing” in the Chesapeake Bay alone, killing over 3 million crabs a year).

This challenge seeks innovations that reduce “soak time” – the time that gear (pots or longlines) has to be left in the water unnecessarily, or deployment in undesirable locations, that increase the chances of snags, or loss.

How might we decrease the occurrence of marine species entanglements with fishing gear and decrease ghost gear creation, while making the commercial fishing process more intelligent for fisheries?

Our main goal is the prevention of gear loss. A great solution not only benefits the environment but also benefits the fishers, they can avoid the income losses that ghost gear creates and also benefit from an intelligent gear that collaborates to improve their efficiency.

To achieve our goal we define a concept of operations the includes an intelligent buoy that allows fishers to track the position of the traps, and a ropeless mechanism that prevents entanglements.

This project contains the design of 2 electronic devices (from left to right in the following image): the Intelligent Buoy and the Onboard Gateway.

To achieve the position marking of the traps we selected 5 main components:

To describe the PCB designs we have prepared the following guides:

It is possible to adapt more modules/breakout boards to the current designs, there are dedicated connectors that allow it in each board, we have explored the following additions:

Onboard Gateway is a 134.11 mm x 62.48 mm PCB that is used to communicate with the intelligent buoy and receive the GPS data. The design integrates 3 main components:

To describe the PCB design we have prepared the following guides:

See all of the files on the Github repository (including bill of materials (BOM), and production plan)

The Eja ropeless gear system consists of three parts: Release Mechanism, Intelligent Buoy, and Onboard Gateway. Here are the mechanical design specifications for each, also available as a pdf here. 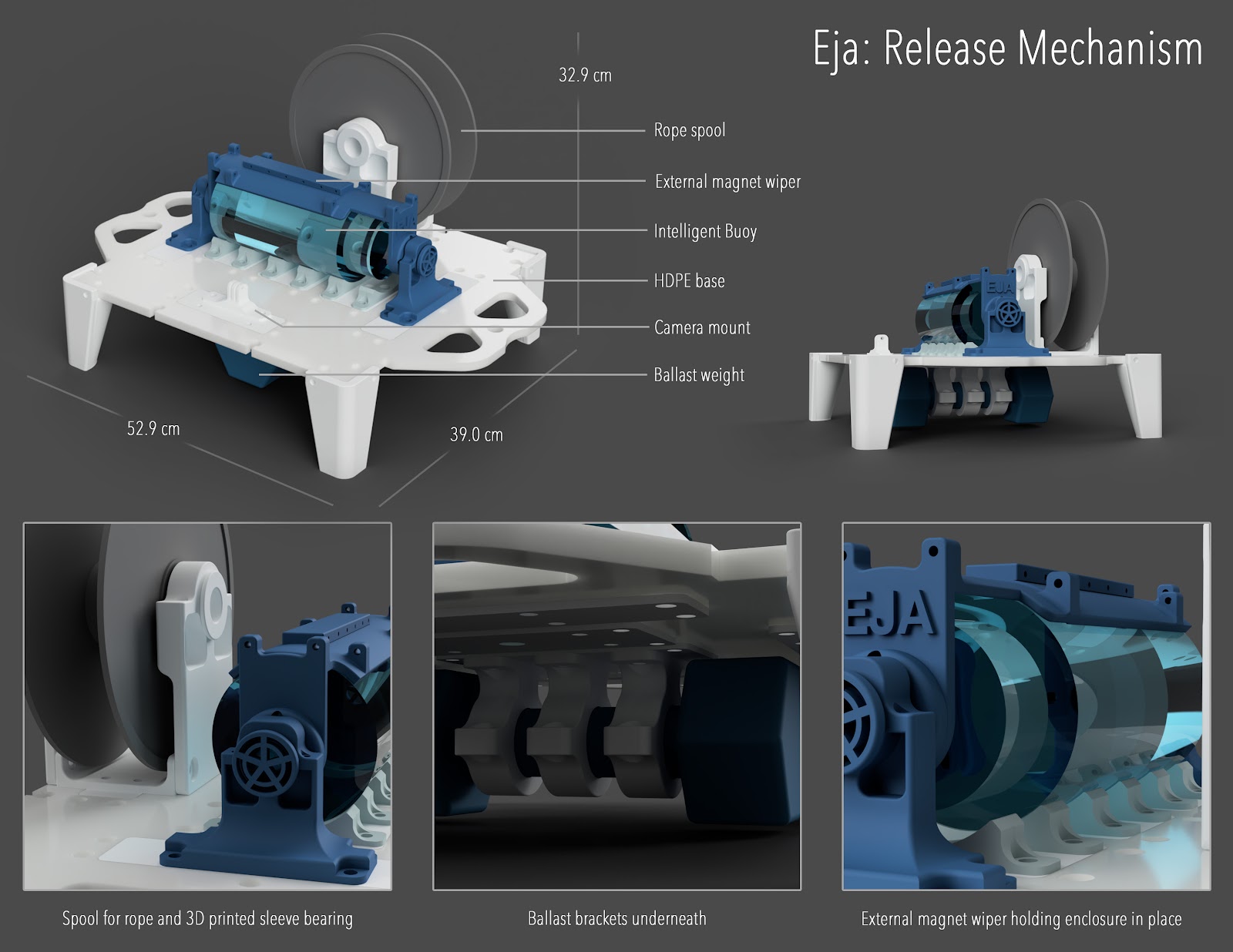 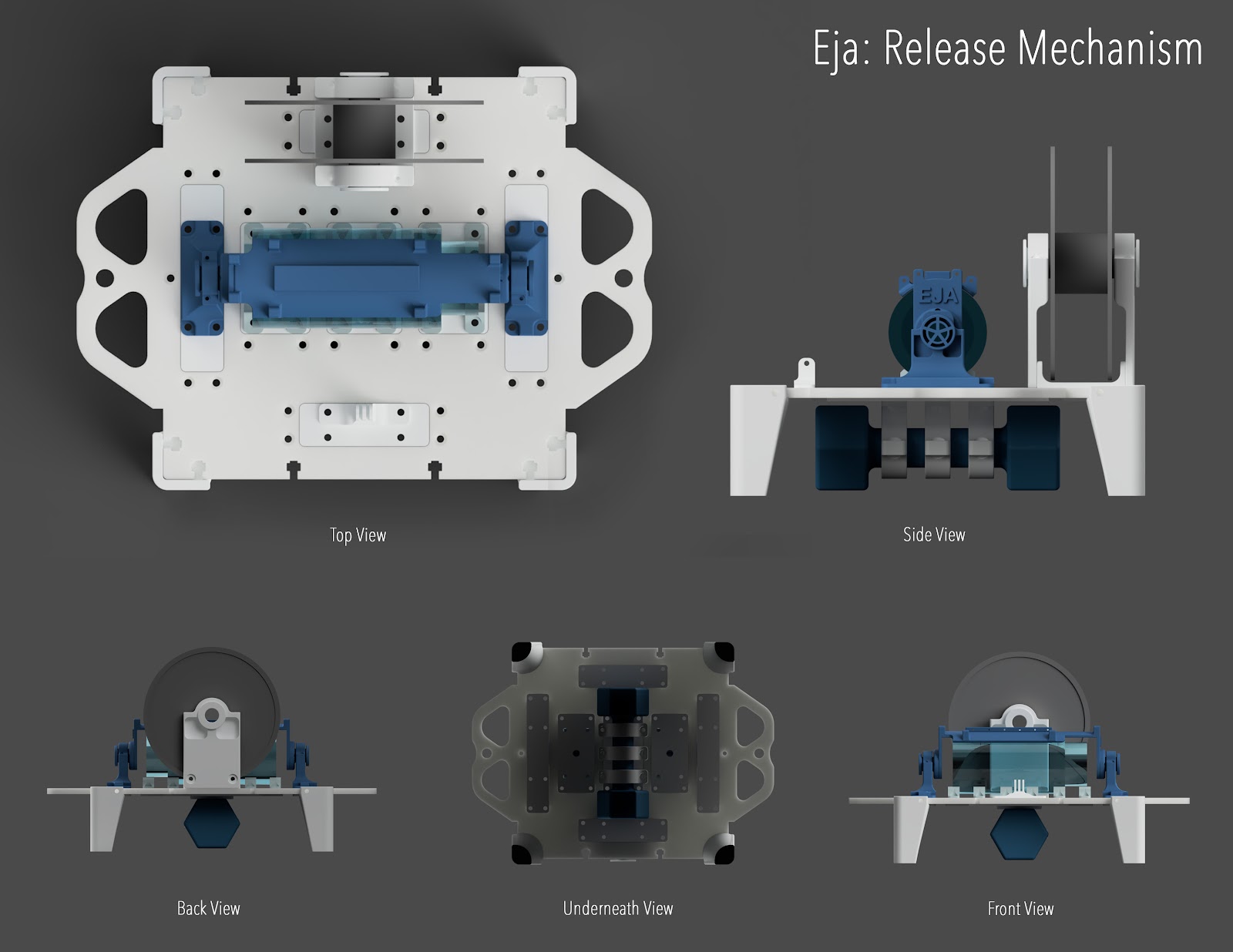 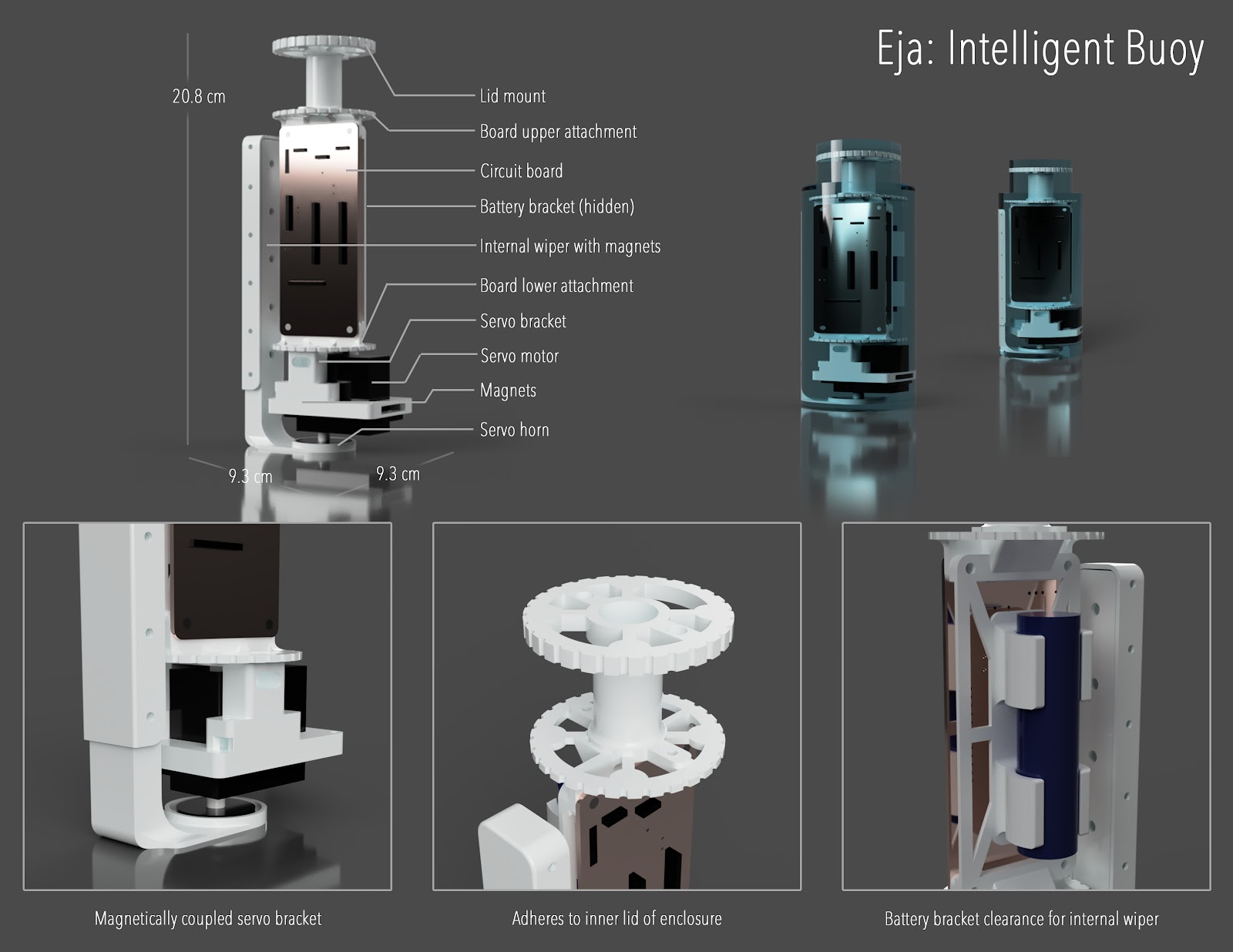 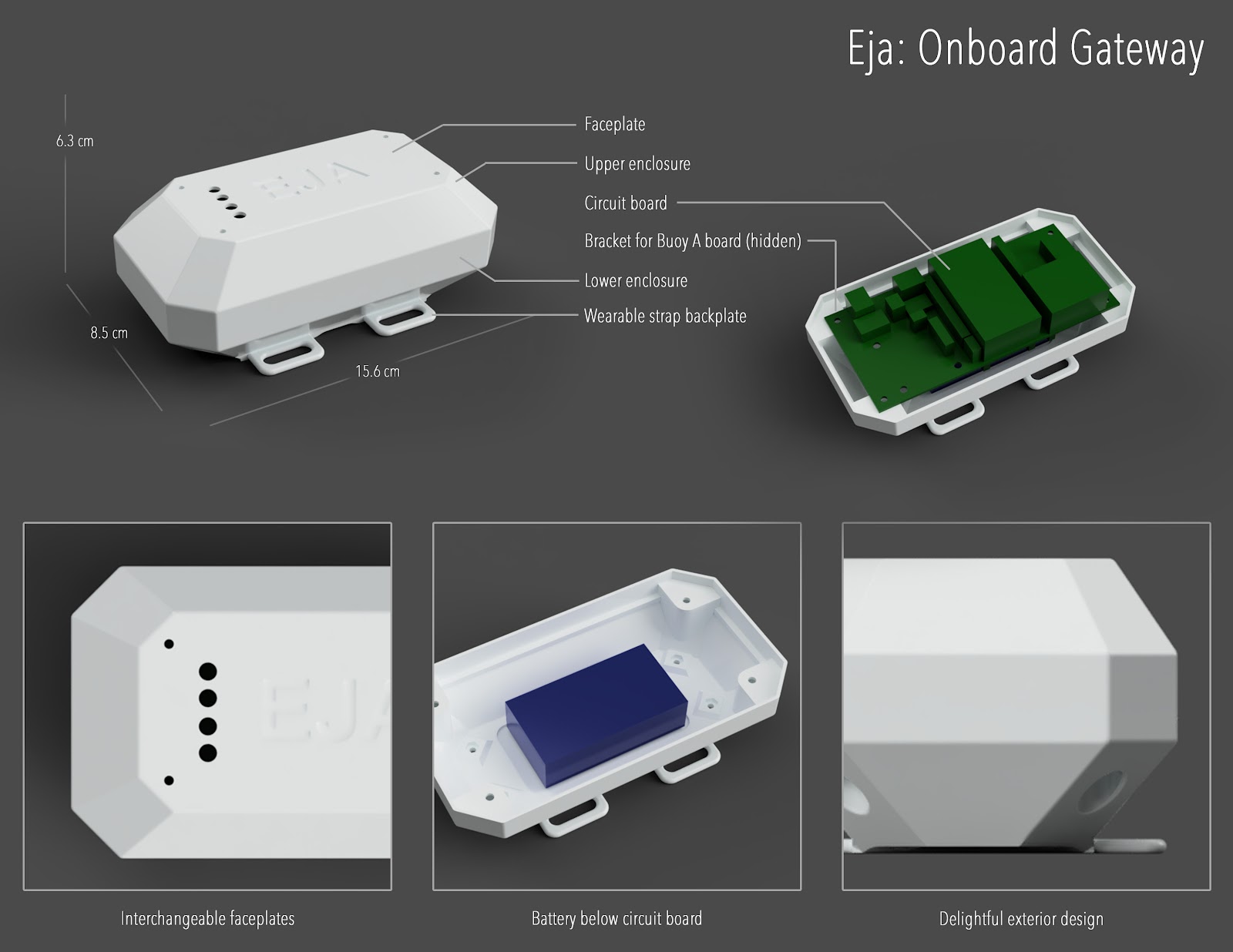 For additional information relating to the Bill of Materials and the Parametric Design, please see this project log: Mechanical Design Specifications.

All of the 3D print files, .STEP assembly, and more can be found on Github here.

Hi guys, what an incredible project, I understand you have been working for a couple of months now, hopefully you can share some progress. I'm an embedded developer and I would like to see how this project has been tackled, but I see that you haven't published anything about it yet, my notes include:

1. What tools are you using? FreeRTOS?
2. How do you manage the offline behavior? I checked some hardware descriptions and I don't see any RTC, do you have any different idea to address this issue maybe by software? If you are using it, how is the process of initializing the device to take the correct time reference in your code? Without a doubt being in the middle of the ocean without an internet connection is a big problem.

3. Will you publish your work opensource? with some repository?

I hope you can answer my questions and I wish you the best of success, waiting to see your results!

1. We are using ESP32 (NodeMCU) which is almost generally available everywhere if anyone need to prototype it, together with Arduino IDE

2. Well, RTC will be included-still contemplating if we should implement it in the firmware or just put the hardware RTC(Probably YES) and about the internet connection- yes we are saving a spiff data inside the microcontroller (About 50 or more data) which will be uploaded when the bouy is connected to the onboard gateway, and push the data when the bouy is on top of the water with Internet to AWS server.

3. Absolutely, its is completely opensource.