Walter is a 6 DOF robot arm in vintage style

I wanted to build a robot that looks like me - vintage.

After checking lots of the stuff around on youtube, I recognized that just a few DIY robots are close to what I had in mind. There's the construction by Andreas Hölldorfer ( Printable Robot Arm), which got covered recently ("Moveo"). Unfortunately without mentioning the obvious inspiration coming from Andreas. I got lots of ideas from his construction, and there are still a couple of parts directly derived from his design.

Another construction called Thor is coming from Ángel Larrañaga Muro which has an interesting differential gearbox for the lower actuators.

I started with a openGL simulation of the construction:

(this is an animated gif generated out of Trajectory Planning UI)

The full software stack is as follows: On the mechanical side, two actuators are driven by a servo (mainly due to space restrictions) and five actuators with a stepper/rotary encoder combination.

Steppers are driven by retail stepper drivers (PiBot) around the driver IC Toshiba 6600 (4.5A max). The stepper drivers are connected to the Cortex. It receives joint angles at 10Hz, interpolates the points in between at 100 Hz and sends the according PWM signal to the stepper drivers and to the servos. Besides micro interpolation of the trajectory, the controller board takes care of the speed profile, i.e. it limits the acceleration and speed of each actuator. The controller board is a DIY board around an ARM Cortex M4 (Teensy 3.5), running the control loop.

The trajectory controller board is encapsulated by a webserver exposing the current movement and accepting commands like “run new trajectory“.

Finally, Walter looks like this. I'm very happy with the color that fits well to a living room environment. Always have the WAF in mind. 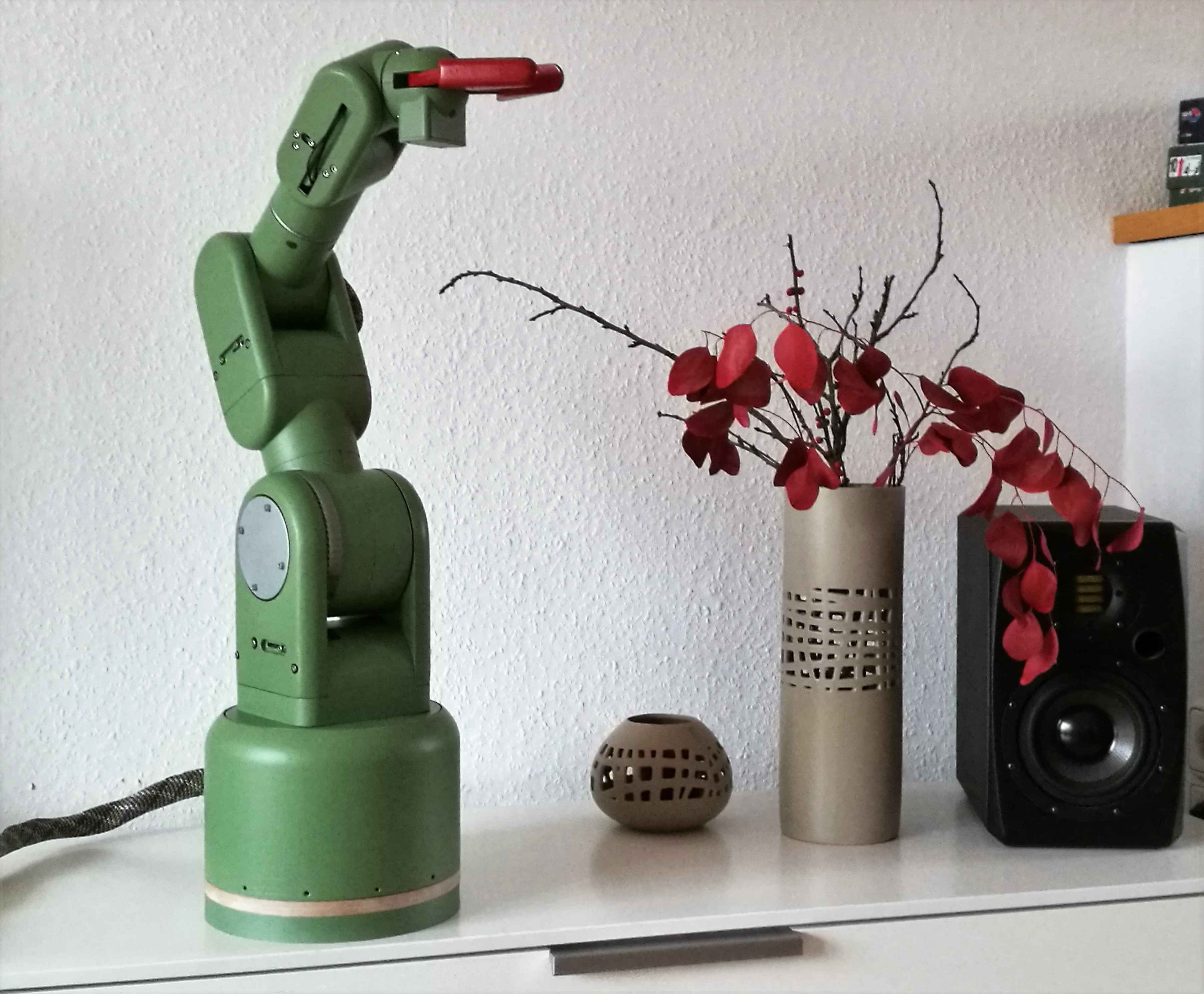 Documentation of mechanics, theory and source code can be found in Walters Documentation.

Hello! I am trying to replicate your project, but when I build in eclipse your code I get the following error:

How is it possible to solve it?

Hi Arnol, this sounds like a setup problem of Eclipse rather than an issue with the code. I would try to reinstall it

Has anybody actually built this, except the author?

This is so great, Congratulations! This is by far the most beautiful robot arm I've seen by now, and not enough wortds to thank you for sharing the design, your experiences and the sources!!

Since I plan to build something similar (a robot arm to shake cocktails), I have some questions:

- What is your experience regarding heat dissipation in the motors / Is the cooling in your design sufficient for a permanent operation?

- Do you have any suggestions for further improvements?

Thanks again for sharing this lovely and inspiring masterpiece of art!

This project is really wonderful, I'm  a college student,but I am deeply attracted by it., I want to design a 3D printing mechanical arm like this by myself, but I don't know how to start, so I would like to ask you what analytical design software is used in the design of this mechanical arm.What knowledge base does the design require?Is there any reference to the learning books recommended?I would appreciate it if you could give me some hints.

Hi, how did you calculate the torque of the stepper motors, maybe you have calculations saved in Word or Excel, I will be grateful for your answer and help. An amazing project. Congratulations.

Hello Mr. Alt! May I please know what the max payload of the robot is?
Max vertical reach and horizontal reach?

Thank you for this awesome project!

Im actually building one and the writs.stl part is not the same as you show in walter website.

Where can i find it?

Hi Alex, thx!  Pls download a trial of Turbocad and use the original tcw files to generate the exchange format you like

We are trying to install all the software on linux but we cant compile the trajectory planner with glut. Can you give us some advice about how to do it?

Thanks and good project!

it is possible to use raspberry pi 3 instead of Odroid XU4?

sure, the ODroid XU4 is anyhow too much cpu power for that.

why didn't you used a rpi3 instead a poore m4 ?

can it use a solder iron and 3d printing pen to clone itself ?

if it can clone itself can you sell me one ?

The Teensy M4 board has tons of uart/i2c/spi interfaces the Rpi3 does not have.

ok i don't know : i'm too handicapped to do electronic but why don't add a arm sbc to remove the else box and also add computer vision to walter ?

for two motor more a chassis with omnidirectionnal wheels : what do you think of it ?

I had computer vision and omniwheels in a previous project, so this is no more a challenge :-)

Amazing! Thanks for posting your design! I am always looking for new things to make. Walter is probably the best I have seen so far for 3D Printed robotic arms, so great job! Are there direct STL files that I can download and print, or just the TCW files?

in github there are dwg files which can be converted to stl with most CADs.

Dear Jochen, this is an amazing project. It's both art and science. Congratulations. Guido

I have https://github.com/MarginallyClever/Robot-Overlord-App which may assist in your OpenGL planning and simulation work.  It's being used to control https://hackaday.io/project/945-5-axis-robot-arm which is largely inspired by the same sources as your arm.  Your design is very elegant!  I hope there's some way we can help each other?

At that point in time I was not aware that libraries for kinematics and opengl are around, so I did that on myself... Lets keep in touch!

ugh, I can't decide which is better looking - your arm or the documentation.  My sin is envy, and I feel inadequate when I see something this nice.  Everybody's able to make their arms work and I'm still sitting here solving torque problems...  https://www.reddit.com/r/robotics/comments/7gpbsy/can_you_make_this_robot_arm_stronger_need/

How should we keep in touch?  What are you proposing?

7.8Nm ? That's a lot. For that kind of torque you will need enforced ABS. I did that in a previous project, it is not that complex, you design long holes in the biceps and put glued carbons sticks in it. Makes a big difference, practically undestroyable. You just need to take care that the sticks are oriented along the force field, carbon is good for compensating pulling force only.

Although you hate timing belts, it wont be possible without a proper gearbox, not only due to the required torque, but wrt precision and avoidance of vibration. I was dreaming of designing a cycloid drive, but due to simplicity I went with timing belts. And it has the big benefit that you can move all heavy motors to the previous joint, such that the ellbow motor is located in the biceps joint, and the biceps motor is in the base.

Amazing project!! I liked the way you documented it. Super easy to follow.

I have couple of doubts. I'm a beginner. Pardon me if you find my doubts stupid.

1) I went through the BOM. I was bit confused on how to use magnetic encoder. I went to the product site on digikey and it seems its a raw chip. Do you have any guidelines about which breakout board to use or if you know any preassembled board, will it be possible to let me know?

2) In one of the comment you mentioned about replacing Nanotec stepper motor. Are you suggesting to replace it with  DRS-201? If yes, will we transfer the power through belt system or should I directly actuate joint from motor shaft?

Also will it be possible for you to let me know how much was the weight of the total robot?

That's exactly what I was looking for. It has been a difficult choice (Andrea's one, Moveo, Thor, RBX1)

But your design is just perfect, I'm following your path with some mods:

- Programmed with ROS via MoveIt (hopefully)

It's going to be a long project for my summer nights ;-)

Awesome, Thank you for sharing.