Ridicule doesn't kill but HV does. I hope to avoid both while using some 1Ж29Б-В and 6Н21Б

My credo has always been : "a circuit that generates heat is a bad circuit".
So I've stayed far from a certain kind of technology which relies on heat to let electrons hop between electrodes.

But I keep hearing about them and get taunted so one day, it had to happen.

I encountered some of these parts on eBay and couldn't keep myself from making a point while also learning how they work, by making a digital circuit out of them. I'd like to look at how ENIAC worked ! (what a terrible idea, in retrospect)

So I've set this simple enough goal : design a simple ALU and small register set with pentodes and triodes. You know, "for educative purposes" and so people stop asking me to use them, as if relays and transistors were not enough ;-)

I all started in March 2017 when I found used tubes in the corridor, certainly replaced by a musician neighbour : ECC83S and EL84 : huh ? 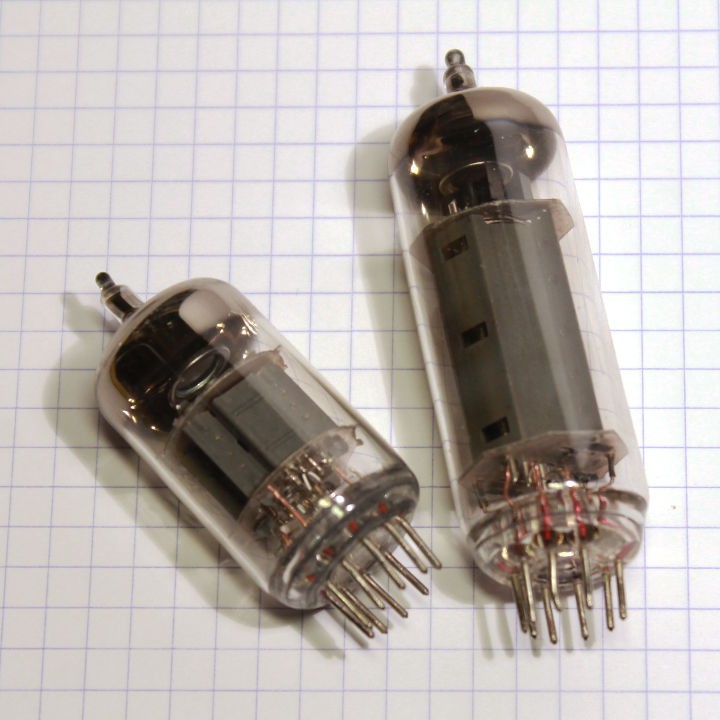 I gathered some documentation and found out the capabilities of these parts. @Ted Wood remarked :

"Thing about valves is that they need loads of support - sockets, high voltage power supplies, high current heater supplies, output transformers etc. etc. Which means that you get very few bangs for your hobbyist buck."

So my idea of doing a simple logic circuit burned almost immediately. Yeah tubes are crap.

I looked on eBay to see how much they cost (as well as the "support" parts") and stumbled upon the younger russian siblings of the EL84... and couldn't resist buying a box of them ! 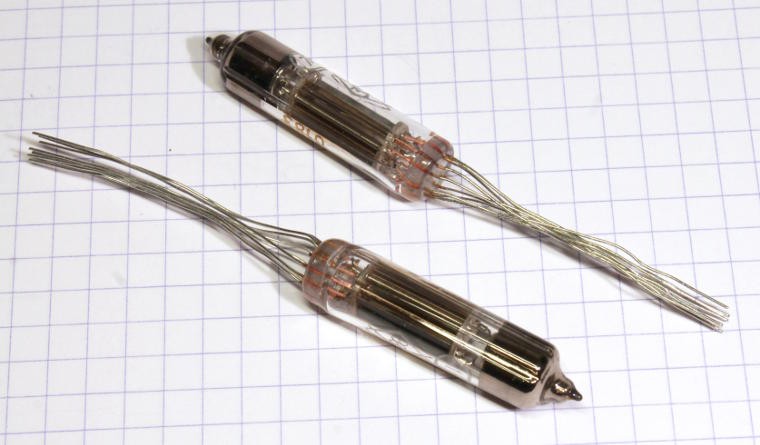 So what can I do with these ? Not much but we can cover the basics : combinatorial and sequential logic, build an adder with an accumulator for example, just like it all started with #SPDT16: 16-bits arithmetic unit with relays (let's stay safe).

The plan is to

@Artem Kashkanov  I uploaded this video where I try to revive old russian electrolytic capacitors.

Then I think I hear you mentioning ESR and capacitors in your video... Does that help ?

I wish I was fluent in Russian !
https://www.youtube.com/watch?v=n3hbjBUB9oo
:-D

I've built valve amps, but never had enough of them to make digital logic. I did once make a darkroom timer with one valve and a relay. It'll be interesting to watch. One component you should consider adding to your arsenal is the humble neon indicator bulb which still is used, e.g. mains indicator lamps. It has a breakdown voltage of around 60V, less than nixie tubes due to the composition of gas used. They can be used as voltage references or shifters like zener diodes, and of course as indicators like LEDs. They are not fast but your computer won't be anyway.

My target is to achieve 1MHz internal clock with 20-studies sequencer. Dekatrons I used in a project can count on frequencies up to 50kHz and this is target number of executed instructions per second.

Nixie lamps are okay to show states, event they are not fast.

Look forward to seeing more of your work!

You have easier access to NOS tubes than I :-P
And I still focus on the all-relays computer... #YGREC8 investigates now the design of the 8×8 registers set :-P

Just discovered someone who is building a Tube Computer:

That is so awesome ! Thanks !

Looks like the IBM circuit is doing passive level shifting ( -100V and resistor dividers) to about +31V or -18V.  You'll need to work out the different values for 60V.  You'll still need a low current negative supply and around -30V depending on the divider values.

Running the filament at slightly lower voltage can probably increase the MTBF.

Well I will just give up on MTBF, since 1) there are less tubes than ENIAC so I'm less affected 2) I don't imagine it running continuously, or even often. Tube should be considered as "expendable" :-/

For the level shifting, I'll see my stock of weird Zeners...

Zener voltages are not well defined when the current is well below the publish values in the datasheet.  The resistor divider current is around 200uA, so you can't use it directly in series to the inputs.  If you increase the input current to each tube, then the fan out each "gate" can drive is reduced.

However you can lift the cathode voltage by using zener diodes.  (I don't know enough in the arcane technology to fully understand the implications.)

It looks like they are running at full voltage. There should be a lower-voltage version somewhere.

One important step in digital computers overtaking analog was to derate the tubes and accept lower performance in exchange for better reliability. The key to getting an operational circuit at lower voltages was a design centering. Check out US Patent 3120606 by Eckert and Mauchly. The math that Mauchly developed is here: https://en.wikipedia.org/wiki/Mauchly's_sphericity_test . I think he invented statistical design, which is of course hard to do when you don't have a computer yet!

Thank you once again Tom !

This is another useful resource and a great reminder that I'm not the only crazy geek around :-)

I'll borrow from http://edadocs.software.keysight.com/display/ads2009/Using+Statistical+Design to explain design centering. It is a valuable when you need a lot of working copies of a design that doesn't always work perfectly due to imperfections in the parts. In the case of tubes, they last longer at lower voltages, but they don't work as well.

Yield analysis
This process involves simulating the design over a given number of trials in which the yield variables have values that vary randomly about their nominal values with specified probability distribution functions. The numbers of passing and failing trials are recorded and these numbers are used to compute an estimate of the yield.

wow, that's beyond the scope of my project but good to know :-)

I never lived with the tubes, nor with relay logic, nor processors with DIP like the Z80, 6502, 8086, etc.  So I know nothing about the vacuum tubes.  I have heard though that they make a sound, or at least make sound from huge power draws.  Is this true? Whats it like?  It would be cool for you to post a video so I can see for myself!

I am surrounded by musicians so the usual question is "can you repair my tube amp ?" and I repeatedly refuse because "an amp that gets warm is a bad amp" and they don't talk to me after :-D

I hope to prove them that tubes are as terrible as what I tell them, even with less horrible models and lower voltages :-P

I guess its what sound you want - does it matter how much energy a oversized amplifier wastes if it sounds good?  I don't know...  I do know that my dad likes the tube amps better, and he thinks the transistor sound isn't as good.  I haven't a clue, to me music is music, as long as its the right genre.

God damn you Yann....now I'm thinking about a ferrite core memory with no semiconductors!!

like those adorable colored frogs. Hint: because they are poinsonous...

I want to do it with hundreds of triodes - I already have 16 pcs of 256 bytes ferrite core memory integrated modules:

I received both tubes : they are so cute !

I have taken pictures and will need time to process them.

I'm also waiting for the programmable power supply, it's nice to key the voltage value and focus on the circuit instead of the PSU's drift :-)

Just remember a triode is a FET with a pilot light, after that all good.

Many years ago (~25?) I built a dual triode superregenative radio from a 12AT7A (similar to the ECC83S). I ran it at 45 volts (five 9v batteries), not the 100v or 250v suggested by the datasheet. The circuit was a FET design that I modified to suit the dual triode. Those pentodes etc. are just like dual gate MOSFETs. Generally they are wired up in one standard way so no harder to use than a triode.

I'm just starting and still wait to receive more material such as the 50×6Н21Б and a programmable 60V lab PSU :-)

Funny how I have already considered "dual gate MOSFET" as AND gates, so when I found about pentodes, I immediately considered them as valuable logic gates without the diodes's parasitics :-)

I have a (comparatively much smaller) box of 'em from old amps and things I've been meaning to do *something* with... so inspire me!

Actually, I have a kids' science-projects book from way back when that, if I recall correctly, describes some uber-simple single-tube projects, surely not digital, so probably not up your alley ;p

hey but digital and analog are tightly related and I'm here to learn :-D Thanks for the pointer !

Maybe you should make a Tube Class-D amplifier ;)

puhleeeez dude, you're going to wake Brian up :-D

A good tube project would be a Theremin such as this one: http://reboots.g-cipher.net/theremin/

Tubes have a high input impedance, which should not go to waste! Let me plug my blog post about understanding tubes again while I am at it: https://medium.com/@tom_a/using-vacuum-tubes-to-learn-jfets-4cdb95c99e22 . The reason I am plugging it again is that it covers triodes and diodes, which is all that is in the Theremin.

Hopefully I can find good tutorials for using tubes/valves for logic gates :-)