As modern photography is revolutionized by LEDs, I'm applying my experience in this field to enhance my hobby

I'm an amateur photographer ( https://www.facebook.com/PhotonTherapie/ ) and light is the essence of photography. I've always recycled leftovers from my work to enhance my artistic activities but lately I've hit a brick wall...
I need a cheap, versatile, rugged, convenient, compact and *practical* flash ! Or more generally a flexible light source that I can use both for lighting and flashing.
Ted Yapo has played with short pulses through LEDs and I'm building on this experience to create my own battery-operated design, using both the "short pulse" overdriving and "long, temperature-controlled" undervoting of 400W of LEDs.

LEDs are now well understood, I have worked with them since 2005 in power ranges from milliwatt to tens of kilowatts.

The "idea" is to use the cheap, large, 100W LED arrays (approx. 10$ a pop on eBay) both in under-voltage (for continuous lighting of scene without heating) or over-voltage (during a short flash, the wattage is high but time is too short for significant energy absortion and heat generation).

The more LED, the better : the energy (and heat) is scattered over a larger surface and photography rarely likes light point-sources. So let's mount several modules on a flat heatsink, the rest is "just a matter of electronics" right ?

The battery pack is made of LiPo cells (designed for RC models) which are flat and can sustain short high-current pulses.

The LEDs will switch from one unusual regime to another :

For the Flash regime : #Bullet Movies has tested microsecond pulses but the light output must be greater ! more current, longer time, in the millisecond range or more. This means incredible current spikes and even greater parasitic problems. Brace yourselves !

For the "lighting" regime, the only two considerations are the temperature and the energy source's autonomy.

Well, the second part is easy to deal with because I've already created a cheap, simple linear system for strong temperature feedback. But this system is battery operated so it needs a more energy-efficient regulator !

Once again, I repeat : the actual power will not be 400W ! Probably in the 10 to 20W range once the temperature has settled. Undervolting the LED makes them more efficient and the heat is spread across the whole heatsink, reducing strain on the parts. It's better to undervolt a 100W module than use a 20W module at rated power (less "hot spots" and much more headroom for overdriving during flashes). See the discussions in the logs.

If it helps you, I've done a similar project in the past, testing the viability of using a LED array for photo flash.

Nice.  I'll stick with the Xenon tube then.

That's a great work that you did there, worth a HaD project page :-)

And it's great and reassuring that I am not the first to think about this kind of circuit ( @Ted Yapo inspired me BTW) but I'm not trying to make ultrashort flashes.

I'm more interested by pulses in the millisecond(s) range.

If you are going to be using natural convection, then you should rotate the heatsink by 90 degrees so that the warm air on the fins can rise long the fins.  At the current orientation, that air is trapped.  Make sure that stuff mounted on the fin side are not blocking air flow or preventing air to mix.  Natural convection is weak, so you have to do all you can for the efficiency.

Force air cooling for 100W is an alternative.  Even a tiny fan/blower can improve the cooling a few times.   Also look at CPU coolers.

I didn't mention enough that the system is temperature controlled. With a small temperature differential, the orientation matters less and the blackness of the anodisation helps radiate the heat away :-)

Radiation is a small fraction of the heat vs convection.  Your LED power will be thermally constraint, but you can improve the efficiency of the heatsink to push that limit higher. 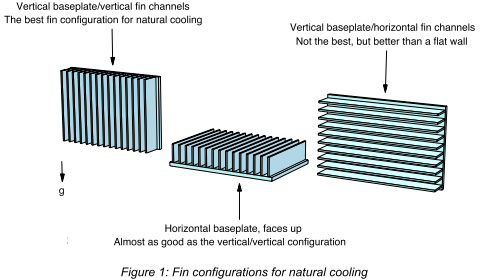 That's something to think about for the 2nd prototype :-)

Thanks for the picture, it's very clear :-)

BTW if verticality is so important, nothing keeps you from rotating the whole assembly :-D

The catch 22 is that some material re-absorb the very same heat they just expelled.

Copper on the other hand is poor at storing heat but very good (conditionally) at transferring heat to the air. This would be most beneficial to your project as the flash is very low in consumed power compared to lighting.

You could have a smaller heat sink if it were copper and fan forced on the condition (as mentioned above) that the copper is oxidized. Copper oxide is not better at expelling heat but it is however very poor at reabsorbing expelled heat so it's total efficiency is much higher.

The nice thing about LEDs vs xenon tubes is being able to easily tune the light output (with current as well as duration - about the only option you have with tubes is quenching to shorten the discharge).  The downside is that the color temperature of white LEDs shift (toward blue) at high currents.  This complicates white balance, especially if you are just using the flash for fill along with (probably different color) ambient light.

Getting crazy, maybe you could come up with a fill-in flash that tuned the color temperature to match the available light...

Damnit, that's more complex than I imagined ! :-D I'll try to keep it simple though ...

Anyway, the funny thing is : with 4 parallel modules, the individual LEDs will not be much overdriven so the color shift might not occur...

The only way to know is to try, right ?

I have considered doing this, but using discrete LED and running a few time the rate current as flash is low duty cycle.  I have also thought about using supercaps to supplement the battery.

I'm not the first nor the last one, I've used LEDs for photo lighting 10 years ago with some leftover bars from a KW project :-)

But I need something portable, compact, pratical, somewhat rugged, so I can shoot outside, and not burn my hands either...

I am going for a much much smaller flash.  Something as a slave that supplement my point and shoot digital camera.  I picked up a vintage "toy" xenon flash last year, but wasn't happy with the design at all.

And I don't like direct light from the camera, it makes the pictures look flat...