This is the prototype for our Waterelf project - now part of wegrow.social kickstarter!

Aquaponics systems need to be carefully tended to keep them working well as both the fish and the hydroponic plants need a consistent environment. We've made a solution - a control and monitoring system - from a number of open-source elements and created software to integrate them together.

This project began with a request from the Incredible AquaGarden, who were busy building an aquaponics system as part of their project located next to the high school in Todmorden, UK. After researching the subject I advised that the available solutions were only half what they needed and suggested that instead I build them a system. I thought I'd be finished by Christmas - and here we are, a year later and the system still isn't quite finished!

But during this year I've had more fun (and more frustration) than I could imagine, I've been able to work with Naomi (who is a genuine programming wizard) which has been fab; and together we've made an amazing system that's fully open-source. I can honestly say that I'm really proud of what we've achieved, and that's priceless.

Now we're ready to tell the world about our project, hopefully gaining qudos, improvements and collaborators. We've learned a lot with our first system that will make our second system (under construction) a hundred times better.

One of the first things I did was to try to get a grip on the detail of what the system was going to be. An initial design decision was whether to base our project on Arduino or Raspberry Pi. Only these platforms seemed to offer the easy-to-access libraries we would need to interface to the wide variety of sensors we needed. I resolved this dilemma by choosing them both! I used a system diagram to help me plan out each sensor and how it would connect: 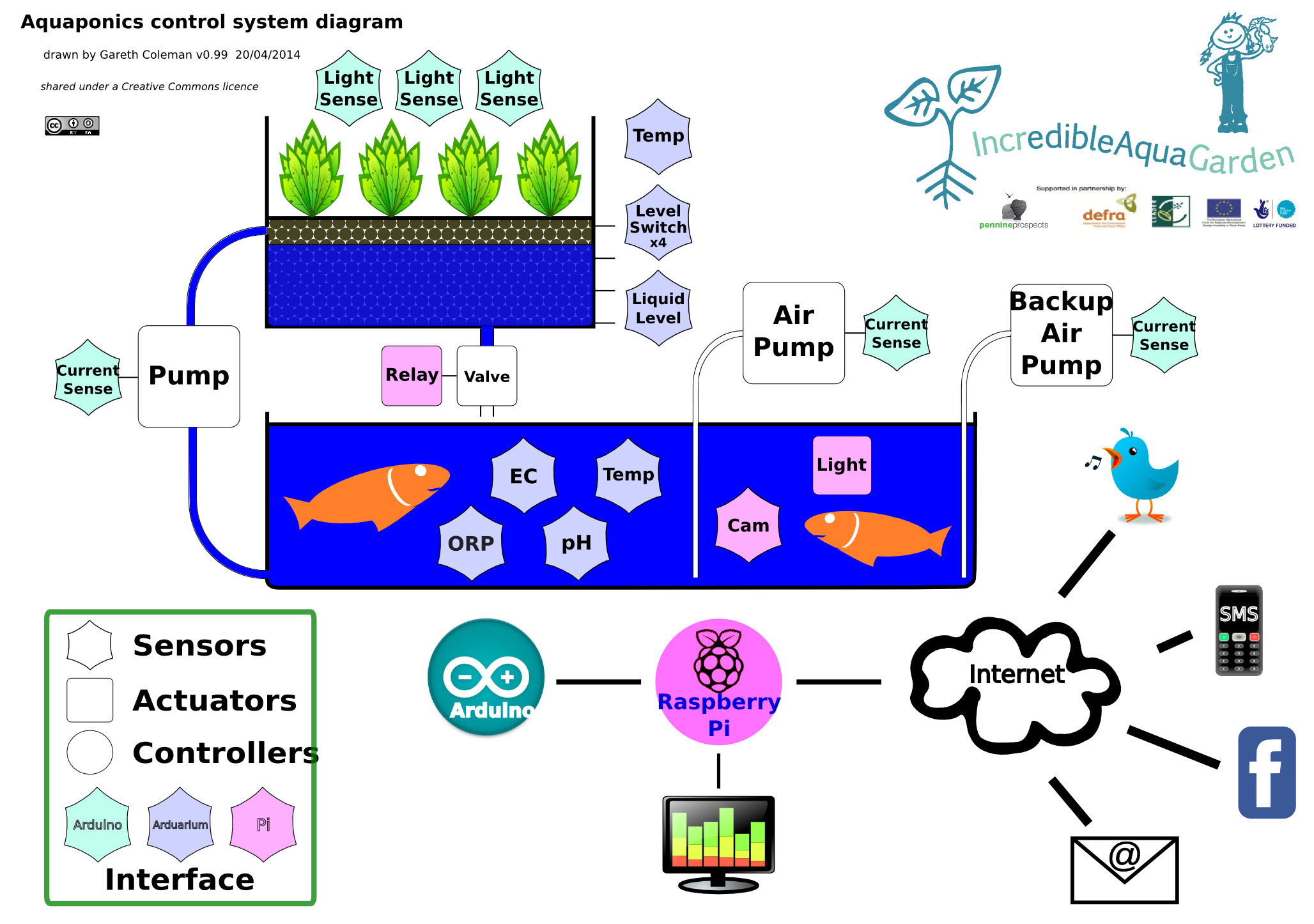 The system uses an Arduino Mega (massive 'rispetto' to them!) to connect to most of the sensors. We wrote code that collects sensor readings every second and sends them over ethernet using the MQTT protocol. We chose MQTT because it's a lightweight solution that's a great fit for our needs, and there are high quality libraries available for Arduino and Raspberry Pi.

Something we appreciate is that although there is a boat-load of great code available for these platforms, not all of it is ready for production. We've learned the hard way that you have to review the code you use and where it's coming from to get confidence that it's going to work - day in, day out. There is a big difference between a quick proof-of-concept sketch and a well tested, debugged and maintained library.

Some of the sensors connect directly to the Arduino such as the water and air temperature, the power measurements and the analog and digital water level switches. Some of the more specialised sensors connect via the Aquarium Ultra shield from Practical Maker: 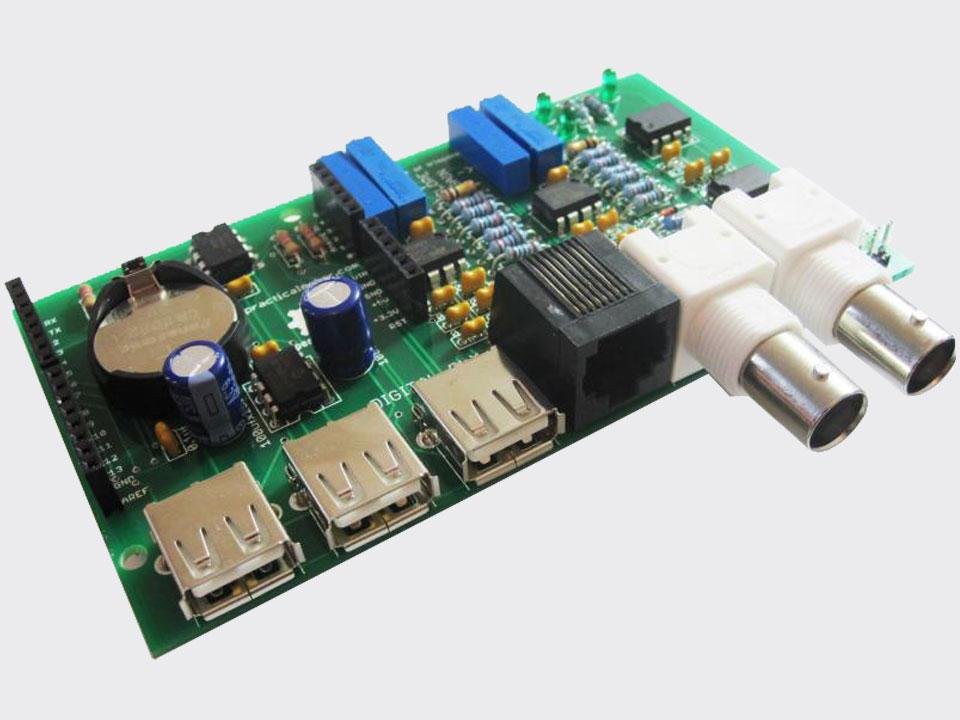 This open source shield provides an interface to a pH probe, an ORP probe (for sensing Oxygen level) and an EC probe (for sensing dissolved nutrients). It also gives a nice set of connections to many of the Arduino's other I/O pins. Since we got a shield last year the design seems to have changed and the price reduced.

The Raspberry Pi receives the data from the Arduino but also has some sensors to monitor itself - and the control elements that affect the system. I designed and built a board that drives a relay and LED lights, and provides an LCD interface. In the end we used a separate relay board and decided not to use the LCD - and the lights are still awaiting a good solution to underwater video! But the experience was very useful - both in terms of circuit design/build and system design.

During installation I found out that the sensor cable lengths had to double to 10m - and this caused problems with the pH sensor and the light level sensor. I decided that the way forward was wireless, and so I designed and built sensors based on JeeNodes from JeeLabs. As they are derived from Arduino it was relatively easy to transition to them, and soon we had a light sensor and pH sensor communicating over wireless to the Raspberry Pi. 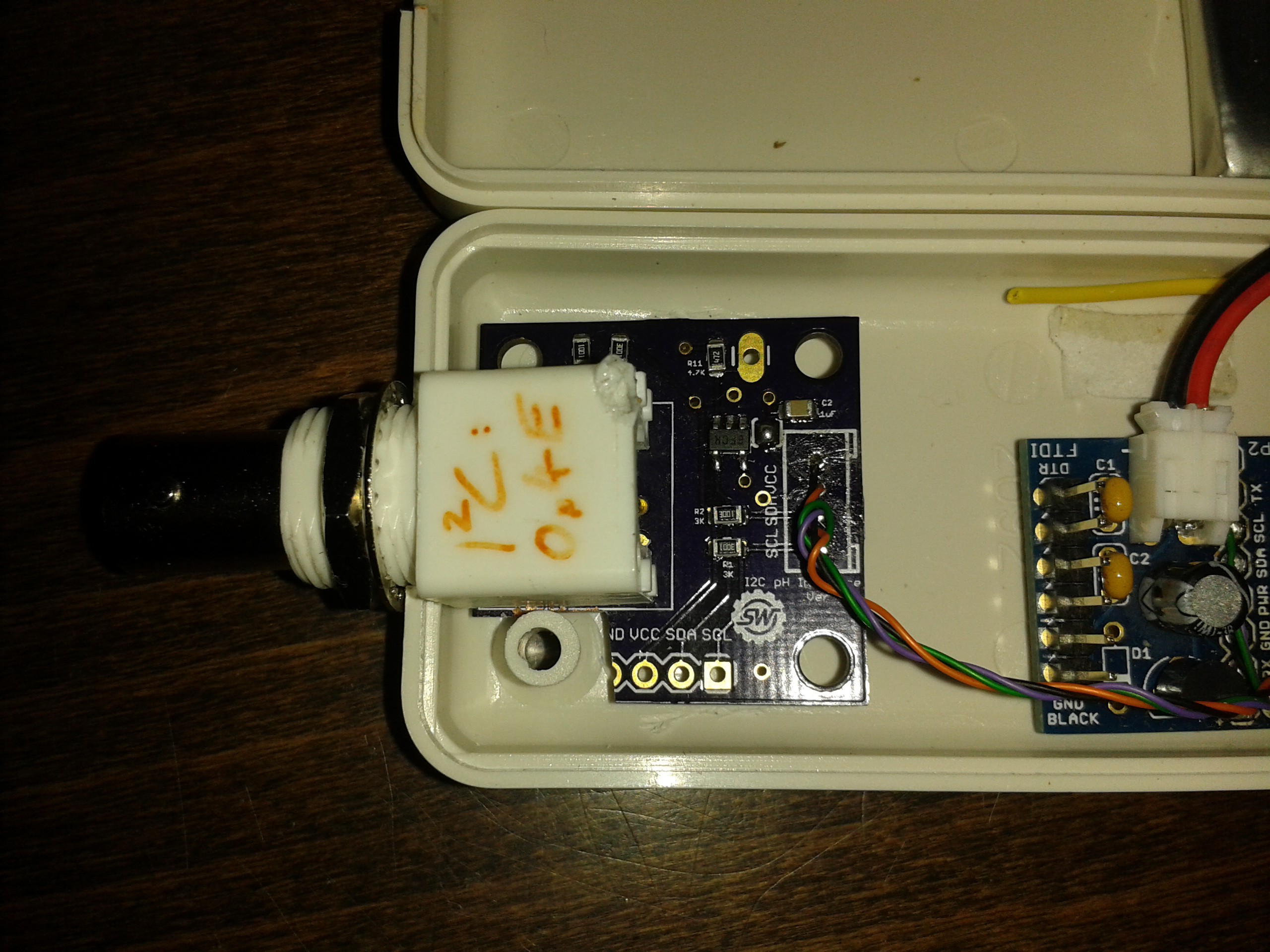 the literal sense - with a hacksaw! - to make it fit into the case I wanted to use. Luckily the board files are available...

My name is Pierre, i'm french and i want to know how do you do the EC home made please?

I have seen things but i'm not sure that it works...!

Thanks you for your job!

What are you using for your PH and O2 probes?  are you actively using this?  On the PH probe, how often do you service/recalibrate it?  thanks...brian

Is this project still be actively worked on? Is Version 3 still in the works? Would love to try a build, but would need some feedback and questions would no doubt arise (already have!). Any update, no matter how short, would be appreciated!  Thanks!

I checked the repository for the Arduino Mega code, but found no entry's for the pH and EC modules on the Arduarium Controller Ultimate in the code.

Saw that you continued with the jeenodes, but was wondering if you have a version where the pH modules do work as I Happen to have a Arduarium Controller Ultimate lying around.

Hello there Billie - sorry no - we never developed that part and by the time we did - we were using jeenodes. Thanks for the kudoz tho!

No problem. I already programmed the sketch for the Arduino mega, but now I'm all into RPI and thought it would be cool to use the processing power to make a nicer touchscreen  application and web-interface for the hardware.

Just learning python and my C++ isn't as pro looking as Naomi's. The code for the aquaponics-arduino for example just gives me the chills ;)

I wish you the very best with your endeavours and I will keep an eye out for coming updates!!

Swagger is now located at swagger.io

Gareth Coleman wrote 11/30/2014 at 14:58 • point
Hey Gregor - we're documenting our work on system2 over at aquaponicslab.org - however I've just discovered the ESP8266 and so I think it might have to be a rethink of everything and go to a system 3!!!! Watch out for the future - it's arriving.

Blecky wrote 08/18/2014 at 17:51 • point
I built something like this in the past (definitely more simple though). One thing I added was ephemeral calculations (using pyephem) to determine the sunrise and sunset times to control the day light and night light (moon). You could add something like that too!

Gareth Coleman wrote 08/20/2014 at 09:28 • point
It might be useful to add in the daylight information - but we aren't controlling the lights (yet!). When we have control of the lighting that adds to the natural daylight we might investigate this. Can you explain how this information would help us? Thanks!

Gareth Coleman wrote 08/05/2014 at 10:22 • point
Thanks for the comment Jasurbek - you are very welcome to build any or all parts of our system - we'd be honoured! But system 2 is so much better, I would suggest that you build that instead - it's cheaper, simpler and better. Most of the details are on our website l0l.org.uk but feel free to contact us directly and then we can give you individual support. We'd hate for you to have to make our mistakes all over again - it's much better that you make your own, brand new mistakes and then we (and others) can learn from those in turn!!

The 2018 Hackaday Prize
A digital instrument with all the flare of a trombone, with the power and flexibility of an MIDI instrument
Project Owner Contributor