My plan for this project was to make a digital watch powered by a Trinket. I'd seen a few watch builds on Hackaday before, and thought I'd take a stab at making one. The Pro Trinket is perfect for this project because of its size; it barely sticks out behind the 1.3" OLED. The parts for this project come out to under $50, so it's also relatively affordable.

The Trinket Watch is a fully-functional digital watch. You can use it as a stopwatch or even pass some time by playing Pong.

The UI is similar to most other digital watches. The center button cycles through different modes, and the top and bottom buttons perform other functions. 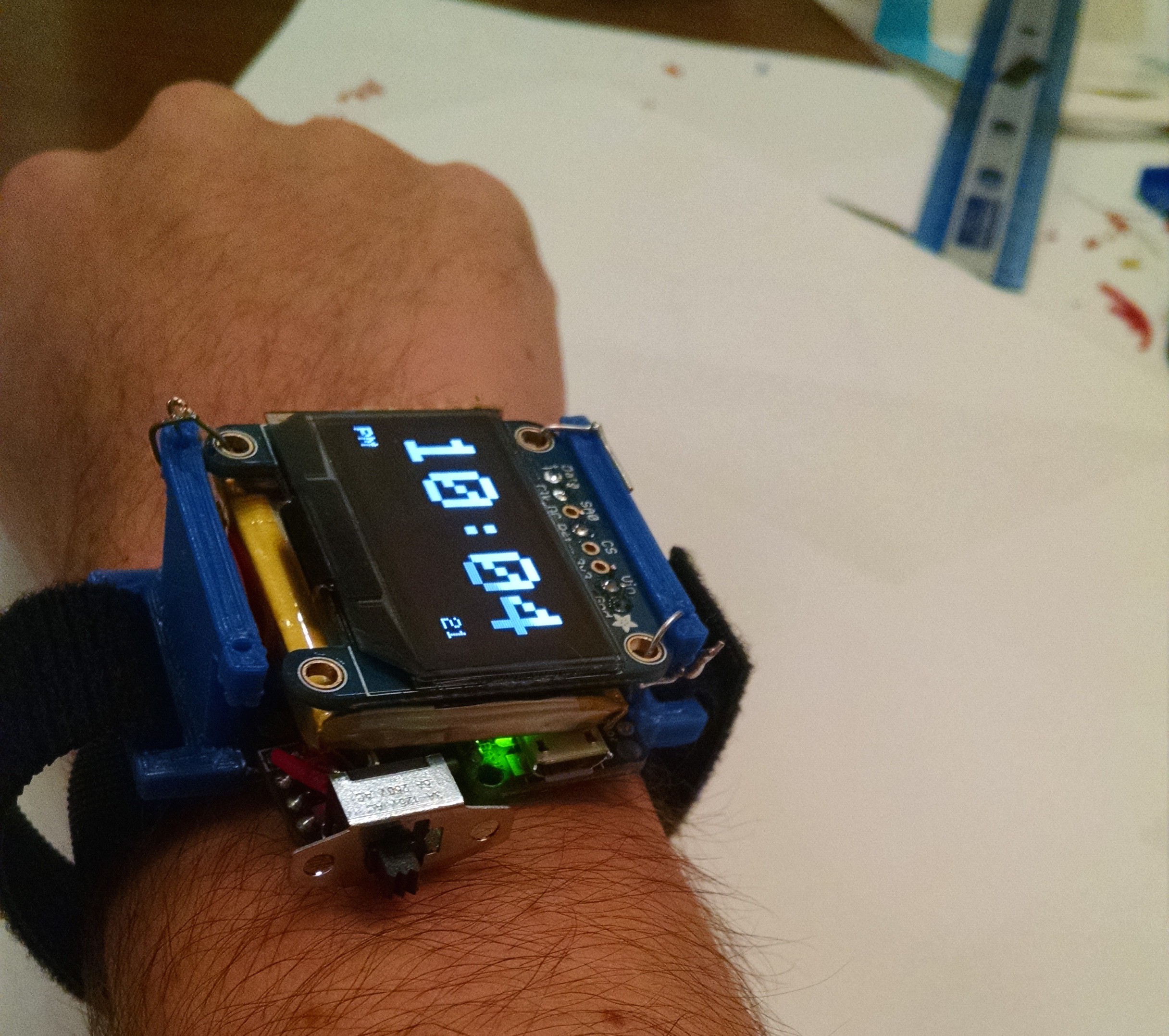 The "case" of the watch doesn't do very much protecting – I opted to have a more open design so that people can see the insides of the watch. And it sure is a conversation starter. The case does do its job well, though: it keeps the watch connected to the watch band.

I drew the schematic by hand, since I'm not experienced with Eagle or anything like that: 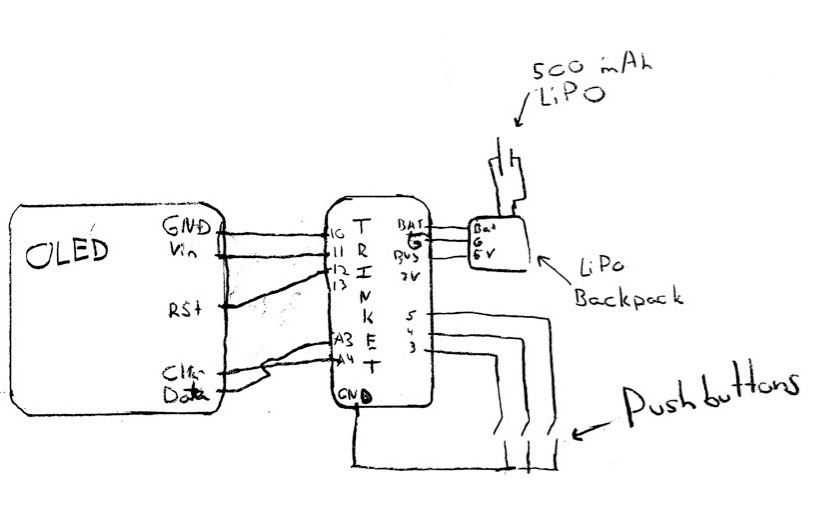 Note: The schematic's missing an optional on/off switch for the LiPo backpack, which is well documented in the instructions.

hi, I'm 13 so I am just learning. I was wondering how to connect a diymall oled (4 pins) to the 3volt pro trinket. Also, is it possible to get a ds1307 rtf to run on 3v? The pins for each are the same. They are: vcc ground sda scl. Thanks!

That OLED also communicates over i2c, so you should be able to just connect SDA to A4, SCL to A5,  VCC to 11 and GND to 10. I haven't tested this, but apparently the Adafruit display libraries that I used in this project work well for the diymall board as well. You just need to change [this line of code](https://github.com/davish/trinket-watch/blob/master/TrinketWatch.ino#L66) to have 0x3C instead of 0x3D.

I hope that works!

thank you sooooo much. But what about the rtc? Did you use one? Also, I was wondering how to set up reminders(i.e. At 8 o'clock, "make dinner") or something like that. Thanks

I actually stopped working on this project around a year ago, and I never got around to adding an RTC. Having to add a voltage regulator on top of the RTC (which is already thick because of the battery) would've made the watch way too unwieldily. Stuart's suggestion might very well work, I'd have to look into that.

Stuart, i have no idea what that means. Also, davish, the code worn't work on the ide. what libraries did you use?

thanks, really for all the support. I have a good feeling about this watch. I'm getting my friend to also 3d print a custom case with my logo that i drew(don't worry, its just for me, not stealing any code/hardware ideas)

@Bhragals Don't worry about it! Everything's licensed under the MIT License so as long as you give credit (which I'm sure you would), you can use the code and designs however you'd like. Let me know how the build goes!

Thanks. do you know what stuart means? this is getting sort of confusing.

Not exactly. He's probably talking about the Timer libraries for Arduino (Timer1, Timer2, and Timer3) which can be modified to achieve more accurate ticks than the millis() calls that I use in the code. Lady Ada talks about them here: https://learn.adafruit.com/multi-tasking-the-arduino-part-2/interrupt-etiquette. Upon further investigation, actually, it doesn't seem like a good idea to mess with the interrupts.

Timekeeping seems to drift pretty easily with my code, so I think I'm doing something wrong, as the Arduino's clock shouldn't be that far off. This library (http://www.pjrc.com/teensy/td_libs_Time.html) might be of some use to you if you want to try improving the timekeeping code. If you do, I'd love to get a pull-request!

Go into your libraries directory and find the file called "Adafruit_SSD1306.h". You're going to want to un-comment out the line that says "#define SSD1306_128_64". That should fix your issue. I'm assuming all the other errors are because that first thing was broken.

I tried that. How do i uncomment again? there are three "/"s. also there is a bunch of spaces. (Sorry about the comments, they are out of order beause of my wifi.).

ok, i think i fixed it. i did not have the newer version. heres my new error code:

ok, now i figured it out. I'm supossed to remove the # instead. but, it still doesn't work. Did i do something wrong? (again)

Love this code! only one issue, I have noticed that the minute hand  is not updating / moving every 60 seconds in the analoge clock mode.

Yeah, I didn't take the time to program a new minute-hand position for each minute (as I found each position by hand to make sure it looked alright on the low-res screen), so the minute hand updates every five minutes.

if you could deploy clock OLED display, ie the whole complex? because the files I see that everything is separate, but surely you have one all the code in which you can switch between watch and stperem a game
I will be very very grateful for the help

what are you seeing out of battery life? i stole a 385mah out of my little quadcopter and am at 19 hours and surprised it lasted that long!

I've worn it for a full day without the watch dying on me. Honestly, I haven't done any real look at battery life. If you were getting that amount of time out of a 385 mAh battery, I might try to get a smaller battery!

Also, thanks for your praise in the last comment! I'm happy the build instructions were easy enough to follow. We're there any modifications you made along the way? I'd love to see some pictures of your build!

I think my total battery time ended up somewhere around 22 hours total so i definitely agree, a smaller battery is in order! i did mine a little different by using a hackaday trinket ive had laying around and a smaller OLED since the 1.3 was out of stock when i originally shopping for them (funny enough, the 1.3 stock was refilled the day this one came in:P) I of course gave credit where very much due on my hackaday.io that i keep more for my own records than to be seen, thanks again and i'll be sure to update if i do a smaller battery or anything else! https://hackaday.io/project/6372-trinketpro-powered-watch

I'm still learning lots about the trinket but this project was pretty easy and fun to play with! working on slimming mine down now, thanks!

Great work, i've created the exact same thing, however i started on an Arduino mini, after hundreds of testing, soldering, re-soldering i eventually broke the mini. I then turned to a pro tinket and plan to 3d print a case to enclose it all. Your watch looks great!

Nice project, I am doing almost the same thing but with a Arduino pro mini. But how do you keep the time? because there is no real time clock on it.

I was also originally looking at the Pro Mini to do this project, but the trinket, being a little cheaper, was convenient. The use of a Nokia battery in your project is pretty cool!

I apologize in advance for the horrible formatting; comments don't give you options for syntax highlighting and the like.

I explain it in my most recent project log, but I'll expand on it here. To set the time originally, I use a constant/macro that's in C++ called __TIME__. This is a char array with the time of compilation in the format HH:MM:SS. I parse this string and use atoi() to get integer values for hours, minutes, and seconds, which I set in the setup() function. I actually took this code from the example code for the DS1307 RTC, which sets the RTC to __TIME__ if no time is specified.

Once the time is set, I use the difference in milliseconds [millis()] between different calls to the function, to keep time. Here's the function that is called at the beginning of loop() (it's on GitHub in the sidebar in the "time.ino" file, too):


As you can see, sinceLast is set to the value of millis() in the second line of the function. When ms is incremented in the first line, it is incremented by the number of milliseconds since the last time the function was called. This is expressed as the difference of [current milliseconds since arduino reset] and [milliseconds since arduino reset of a few milliseconds ago]. Since I don't know exactly how long my code takes to run, this allows the arduino to keep time without knowing exactly how many milliseconds it took to run all of the code. The next part is how the time gets put into a readable format. If ms is greater than 1000 (how many milliseconds there are in a second), then seconds are incremented by how many seconds have passed since the last call (the quotient is truncated because seconds, minutes and hours are all integers) and milliseconds are set to the remainder. The same happens for minutes and hours.
I also have a mode on the watch to adjust the time by incrementing hours and minutes, so you don't have to upload the code every time you want to adjust the time. You can see it in action here:

A countdown timer for use when you can't have any light. Multiple sequential timers stored in EEPROM, with coded beeps to indicate events.
Project Owner Contributor