This is a HDMI 2D GPU board for microcontrollers. The engine is embedded on a FPGA.
VHDL development was made on a Terasic board.
Specifications f̶o̶r̶e̶s̶e̶e̶n̶ achieved:
- Maximum resolution HD (1280x720) @ 60Hz with 8bbp palette (256 of 16.7 Mcolors), double B̶o̶f̶f̶e̶r̶d̶i̶n̶g̶ buffering, hardware acceleration (line, circle, blob, sprites, text, clipping area, ...)
- FPGA config file upgradable via USB
- Foreseen: Sound via HDMI.
Purpose:
Give a display to ARDUINO, PIC, ARM of whatever microcontroler that has a SPI interface.
Full ESD protected.
Target price: 90 EUR

One of the frustrating thing when you deal with small embedded systems is when you want to go for graphic capability (at least medium to high resolution) you must use Linux or another high level OS (and moreover not real time). The reason is the bloody closed source code driver for all these cheap ARM chip (Broadcom, TI, ...). There are some projects that try to do bare-metal on the chip (on RasPI for example) but that's time consuming.

Then I decided to launch HOMER. With HOMER, you'll have the key to do some beautiful graphics, GUI and even games on a classic PC monitor.

How Homer works (see the sketch) ? 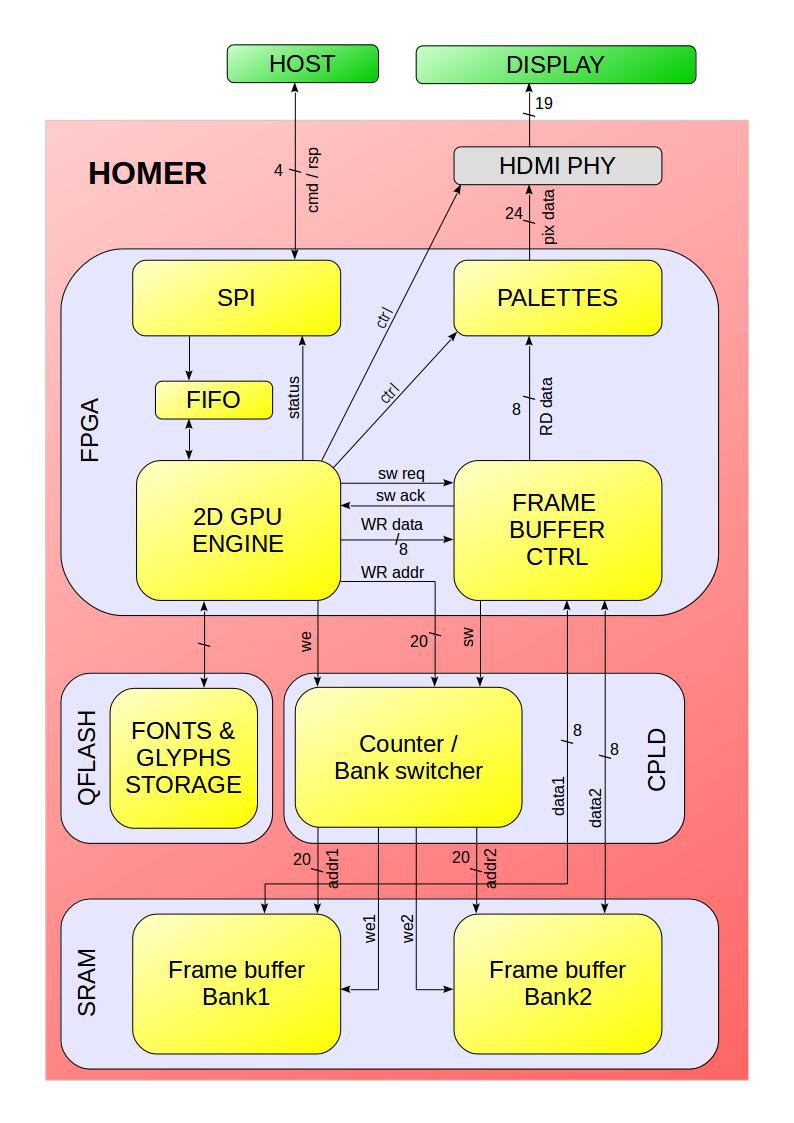 Homer can connect to any host with a SPI interface or the USB interface if connected to a PC. Supplying Homer is done via SPI connector, via USB interface, or both.

The host (PC, uC, Arduino, ESP8266, whatever...) sends high level commands to the SPI or USB interface (the max speed of SPI is not yet defined, I'm using 10Mbps now). The commands are then pushed to the FIFO. The 2D GPU engine pull the commands and process them. Basically, the engine contains a set of primitives (drawLine, putTxt, circle, fill, blobCopy, selectPalette,...) that read/write the non-displayed frame buffer (FB). Some primitives like putTxt and blobCopy take data from the FLASH and send them to the non-displayed FB. The flash contains user pre-loaded fonts, glyphs and images that are transferred (with processing) to FB with single commands. The host has only to store the useful data in FLASH at once. A special command (SwapBuffers() or whatever the name) ask HOMER to switch the FB that is displayed. Internally, the 2D engine ask the FB controller to do the switch. As soon as the FB controller did it, it sends an ack to the 2D GPU engine, the following commands are then applied to the new non-displayed FB. Transparency management is on work a̶l̶t̶h̶o̶u̶g̶h̶ ̶i̶t̶ ̶i̶s̶ ̶s̶l̶o̶w̶e̶r̶ ̶(̶a̶ ̶“̶r̶e̶a̶d̶ ̶b̶e̶f̶o̶r̶e̶ ̶w̶r̶i̶t̶e̶”̶ ̶o̶f̶ ̶F̶B̶ ̶i̶s̶ ̶n̶e̶c̶e̶s̶s̶a̶r̶y̶)̶. Displaying the content to the screen is done via a simple FB scanning: the CPLD has a counter, synchronised with the FPGA one, that increment the FB RAM addresses. The RAM data are transferred to FB controller then to one of the user-stored palettes. Actually, palettes are LUT with 256 entries and 24bits outputs (8bit per color). The data are then transferred to the HDMI PHY chip with the right timing.

Host can implement the commands like this (big endian, SPI 8 bits):

The Frames Per Second (FPS) is 60 maximum, it corresponds to the HD refresh rate of 60Hz. Depending of the 2D engine charge, the FPS may be lower.

Hi, great work! Do you plan to make the VHDL available? Are you open to the community helping with it?

I've arrived to your project page searching information about the TDA19988 chip.

I'm part of a new FOSS community where we are trying to develop a kind of mini-Mister (FPGA retro gaming device) with a board called Chameleon96 (Cyclone V SoC FPGA (110K LEs) + dual-core ARM).

The history is that there was recently a price rebate on this board so in our community there are around 60 people who bought it. Later on we realized the lack of documentation of the TDA19988 chip this board uses for HDMI output.

I've seen you have figured it out how to initialize the TDA19988 chip to work with your FPGA!
Would be of great help for us to know your findings regarding the TDA19988.

You are welcome to join our community if you are interested in the project.
By the way I left you a message on twitter regarding this as well.

How do I find your community btw?

Hi konrad, We have started a FOSS community around the #Chameleon96 #FPGA board. Find us on telegram https://t.me/Chameleon96

Have you given any thought to supporting wishbone bus? The fantasy being things like

video is so blurry...

cool...also anxious for some source files, will be patient :)

Very nice project (especially the PCB design). I didn't understand though why did you take so many components, which IMHO unnecessarily raise the price:

- separate microcontroller (why not use a softcore instead?)

PS. are you planning to post the sources somewhere?

Unless you take the GX version of the Cyclone IV (more expensive, 24€ instead of 12€) it's not possible (for me at least) to output HD signal directly on HDMI connector. The HDMI PHY cost less then 5€ and let you transfer AUDIO I2S signals as well.

The separate microcontroller has two advantages:

1. It will take in charge FPGA upgrade with a simple USB interface

2. It cost less (<2€) than the Altera configuration chip (15€). For this first prototype I put both for doing tests but the idea is to remove the conf. chip.

Yes, the source will be available as soon as the project is well under way.

This is a very interesting project. Nice work so far!

I am very interested into adding support for your GPU to my (embedded) graphics library called uGFX  (http://ugfx.org). What do you think of that? Are you interested?

Is it possible for you to supply one or two boards to me so I can implement the official support?

Yes I'm interested but wait ... the project is not yet finished ! I've to do a lot of hardware tests and finish to translate my VHDL code from Terasic to this new hardware configuration. For the moment I've only one home made board. As soon as I can (and if everything goes right) I'll build another one for you (I hope also for a successful kickstarter campaign otherwise you'll work only for me :-) ). Stay tuned for the progress!

Excellent stuff - I'll be cheering you on!  I've got a similar, yet much more modestly spec'd project going (144 Macrocell CPLD).

Thank you, I saw your project. You're more advanced than me! It's a lot of work (and hope since that's not going on to be easy). As you, my motivation is to have a simple graphic card for guys who don't want to use Linux as soon as they want to do some graphics with their projects.

Interesting project. Could bring some beef to arduino projects...

Do you have any target date when this thing will be available?

AFAP (As Fast As Possible!) it depends on the problem I'll encounter but I've a target by end of August for a board 100% working.