Because BCD is not enough and decoding 7 segments can still be improved. From 0x0 to 0xF in all technologies !

The TIL311 is a nice but expensive, obsolete, power-hungry hexadecimal display. It would be cool to make a tiny module with similar functionality which solves its shortcomings. A 20-pins PIC is a solution but other decoding chips could work too. The PIC16F527 is one of the cheapest 20-pins PICs (sub-dollar), but it can't implement the latch pin as fast as the original TIL311.

This project was created by Yann Guidon/YGDES but is actually being implemented by al1.

This project was original created by @Yann Guidon / YGDES out of frustration about this. Yann got some TIL311 to go forward in his project. The modules are cool for hobbyist projects but they have some issues. However it looks straight-forward to make such a module oneself, so why not DO it ?

Out of the suggestions I ( @al1 ) joined this project. I had some fun designing this little PCBs. Some iterations can be found in the project logs and comments. The goal behind these PCBs to get a very similar replacement for the TIL311. The size of the PCB is the same and at least the pin mapping is similar (timing could be different). The PIC16F527 is a very good micrcontroller for this: Cheap and exactly the right number of IO. 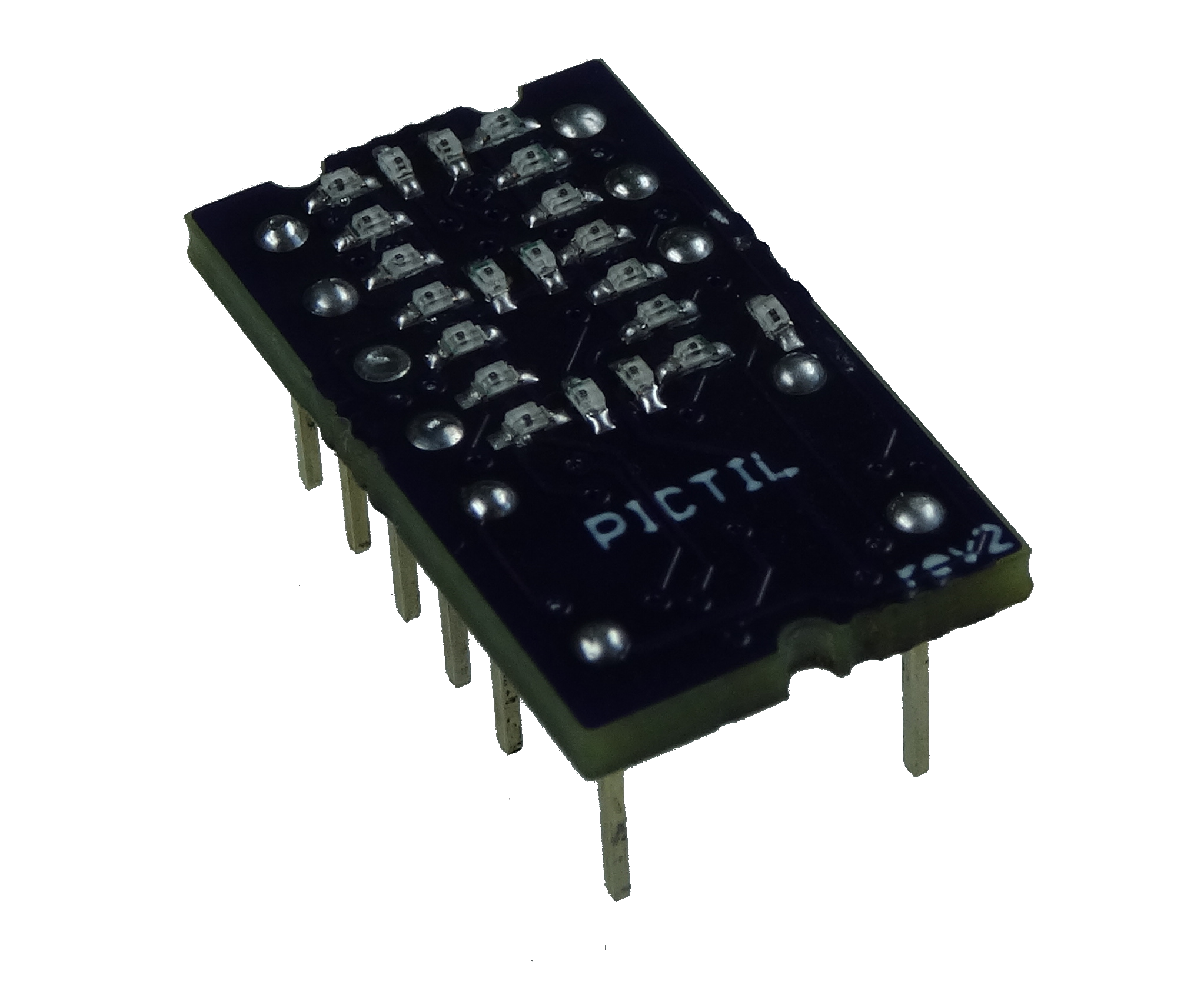 Something about the Hardware

Not much to say about the Hardware. Its an quite basic schematic. The 20 (rev1 and rev2) or 13 (rev0) LEDs are controlled by the PIC. There are four inputs for the value and one latch input. The blank input is built discrete with a p-channel mosfet.

You can find schematic down in the file section.

There are different Hardware revisions available. Only rev2 and rev1NEO boards are working completely (see Errata). Following some additibnal information about the two working versions:

This is a correct version of rev1. It uses the now working blank circuit of rev2. The benefit of this version compared to rev2 is that also the left dot is available. This dot is not present in rev2. The downside of this revision is that is uses to small traces to fulfil OSH parks design rules. 5mil traces/space and 12mil min Vias are used. This is manufacturable by dirtypcbs for example.

This Hardware Version does not have the right dot. Only the left dot is available. That is because rev2 conforms OSH Parks design rules (6 mil traces/space 13mil min Via),

The software is nothing special yet. After some setup there is a endless loop. In this loop the led status gets updated if the input status changed and if the latch pin is low. The fonts for the LEDs is stored in a array. You can find the c-code as well as ta compiled hex-file in the bitbucket repository. 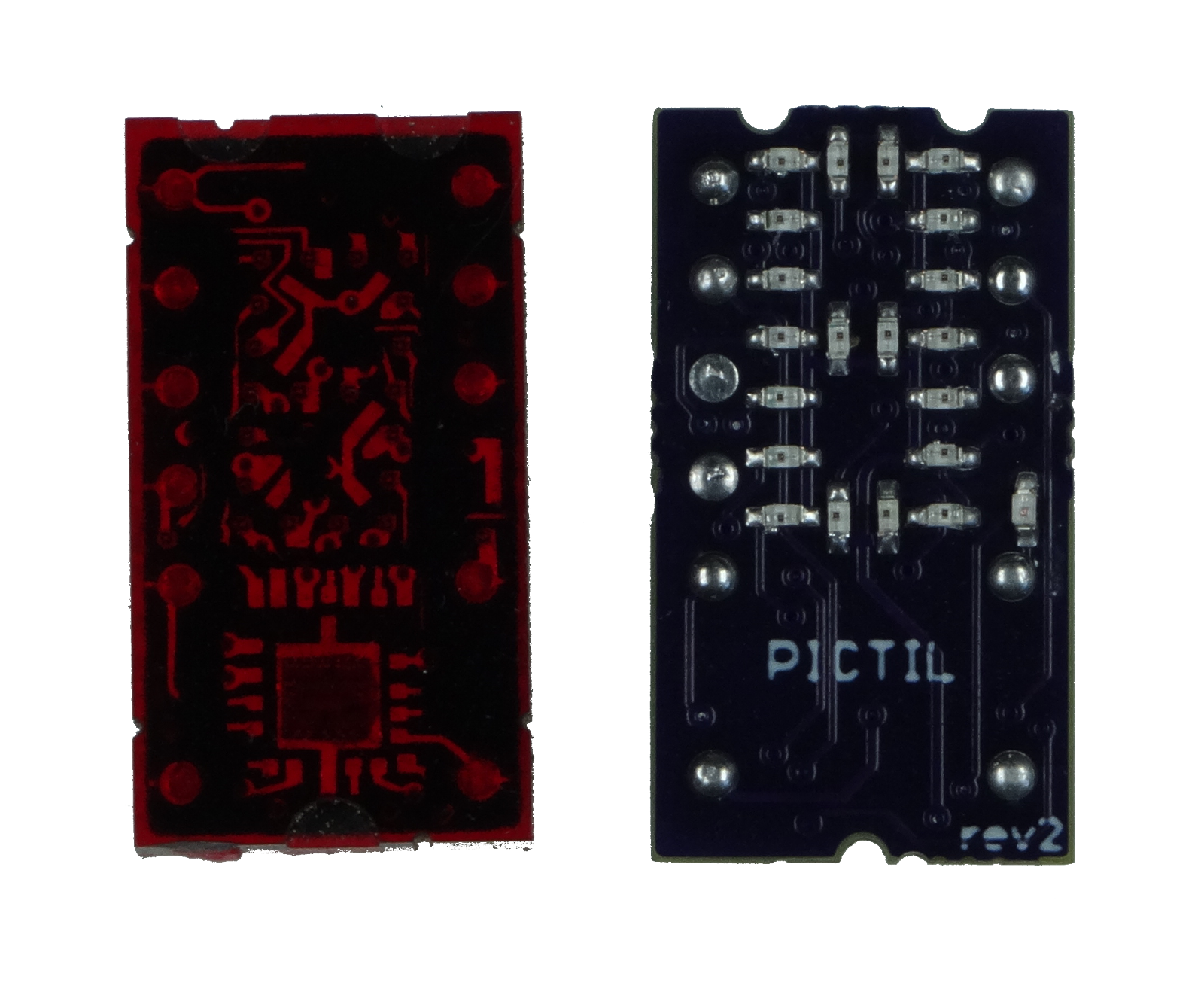 There is I mistake in the schematic and because of that also on the circuit board. I should had noticed that before but source and drain are interchanged. This can be fixed by not using the blank-circuit and bridging the transistor by a 0 Ohm resistor. See also this log.

The error is still there. Thought I did fixed it. (see rev1NEO for a fixed rev1)

By any chance can I get a part number for the resistor array size.  It says 0402.  I checked Mouser and they display EXB-28V102JX.

The original Listing is not available anymore. But similar arrays should be also available on Mouser, Digikey....

For my ttl cpu it would be nice to have a "0.56inch" format version of this for the breadboard.

I quite like that idea. Did a little placement test for just the LEDs:

Something like this would fit. Maybe I will finish it (all beside LEDs, is still missing and no routing done). Suggestions for the Pin out? For data inputs pins on one side. VCC, GND, blank on other? Maybe I should also add at lest one dot.

hi, a bit late to the PICTIL I know but, just in case anyone is there... how do you go about programming those 16f526 chips, in circuit? My TL866ii plus doesn’t support it but I guess I could get a suitable programmer for in circuit programming. Any suggestions would be greatly appreciated.

back when working on PICTIL I used a PICKIT2 to program them. It was quite handy because all needed pins where connected to one of PICTIL's pins.

Are the LED's multiplexed or directly drive by the PIC processor ?

Nice project! The TIL311 is too rare and runs too hot, and improved replacements like Innocor's INL0397 are even more scarce. If you ever decide to crowdfund a production run, be sure to drop an announcement to the COSMAC ELF Forum. TIL311s are commonly used by builders of these simple computers, and there's sure to be some interest there.

Hi, I just ordered the boards from OSH and had a few questions.

1) Is the component list for the rev2 board up to date? It has the FET as a SOT-23 package and I think that's too big. Is there a full list of the components for Rev2? I think the PIC also needs a package type listed (I'm not familiar with the package types available).

2) Is there a placement layout somewhere? Most of the PCB is ok but the resistors and the cap are hard to tell just from the size and colours.

And thanks for all the hard work!

nice to see someone rebuilding this. About your questions:

1) I just updated the parts list on this project page above. The Fet was the old (rev1) one. Also the part number of the PIC specifies a package now.

2) I uploaded one in the image section. I did not marked all LEDs and the resistor networks.

Would be nice to see some image when you are ready.

What a piece of ART!

Beautiful layout and, in a 'LCD / OLED' world, we need some 'retro' stuff like this.

Any updates on a Tindie shop?? I could really use 6 pieces myself in the next week or two.

There are no updates on a Tindie shop. So far my home production would be also to expensive. And I am a bit worried about the legal/tax stuff of semi-professional selling. The easiest way to get some is to build it yourself. I did shred the link to the boards at osh-park above.

Possibly just sell the pre-programmed PIC's? I don't mind a kit, I just have nothing to program a PIC with.

Is a classic TIL311 out of question ? It has drawbacks but it will get you started faster, until you get the enhanced version...

For PCB only just sent me your address. A soldered version will take some weeks to produce. There is no "official" way to buy it yet, but I was thinking about Tindie - also just to try it out.

I could use a half-dozen finished PICTIL right now ;-) but I'm sure you could make a little money on eBay and Tindie, since the TIL311 is pretty in demand and the PICTL is a great improvement. Even solving just the power supply/heat issue is amazing, and the absence of resin reduces the problems of aging.

Cool ! I just noticed : @al1 now has ownership of the project, that's less pages that I have to manage ;-)

The TIL has more diodes - you will not have the same nice effect with your circuit. I have tried with 0402 diodes, but the effect was not that good, and I had similar diode arrangement to yours.

Hi !
You seem to have experimented with LED displays for your #Small voltmeter :-)
I hope you can share your experience and show the prototypes.

al1's experiments follow his own set of criteria, he wants to preserve the form factor, I am looking for other characteristics and I develop my own version (for the #Discrete YASEP ). Between form, function, features, technologies etc. I think there is a lot to do and learn :-)

I did experiment, and it was a fail. I ended up using those bubble displays, as they are better. For a while I did consider HDSP-2011, but it is more complicated and I ended up using QDSP-6064.

yes the effect will be not the same. I did choose the 0402 leds for easier soldering. In a first idea(https://hackaday.io/page/1315) I used 0201 leds an nearly the same positions as in the original. But 0402 leds are much easier to source and to solder.

In the next weeks prototype board should arrive. Then we will also see if the effect is good enough.

I am experimenting with an alternate 7-segments system, see https://hackaday.io/project/8121-discrete-yasep/log/27617-hexadecimal-7-segments-display-continued

This uses 4014 LEDs for the segments. I'll see if/how I can make small modules with this system.

The 4014 LEDs do look good. But with these LEDs you have only an classical seven segment display.

This is true, it doesn't have the same charm. But my initial requirement is to display hexadecimal numbers (low power, low profile and low price are also important) and it does just that :-)
One could add some "style" by adding a 1206 dot at each segment crossing (or 0805?). Then a 3014 format should be used instead of a 4014 LED. brightness consistency would be harder to balance though.

I'd probably make this into a 5x7 matrix display and for your specific application only populate the LEDs necessary for the 7 segments. This way you could use this PCB/module for other projects as well.

nice Idea. I would use seven segment displays as display. Then also less microcontroller outputs are needed. Something similar (with serial interface) I did made here #tiny7

7 segments are nice but it has already been done over and over. I have found several projects online when I was looking for bin-to-hex converting chips, "Use a PIC" was a frequent answer...

The 4×7 display has a certain charm and a distinctive look that appeals to me and others :-) For example I have found http://anachrocomputer.blogspot.fr/2015/01/building-hex-led-display-on-pcb.html (though this display uses an expansion chip)

But my need is to replace the actual TIL311 I have, probably dropping the latch strobe input along the way. In fact I hope to reuse this design in #Discrete YASEP

I did some research on small leds (somehow I do really like your idea)  and found this:

My plan is different though, I'm looking at 1206 LEDs to make nice square dots.
One of the TIL's shortcomings is the width of the digits, they are separated by a significant gap when soldered side by side.
More LEDs is not a reasonable approach but since the TIL's days, plastic diffusers have progressed and can spread the light in a desired shape.

My plan is to have the 1206 LEDs on the visible side and a SSOP/SOIC chip on the other side, with 4 pins in .1" spacing on the top and bottom.

I should do some routing to try the idea...

If you are interested I summarized my ideas to your project on this page: https://hackaday.io/page/1315

@al1 your rendering is awesome ! I had something less extreme in mind but I'm impressed and I am glad I gave you inspiration ! I can't wait to see it done for real :-)

A daughterboard with a capacitive gesture sensor for the Adafruit Feather boards.
Project Owner Contributor

Beginner friendly way to solder 0603 or larger components to pinheaders so you can plug them in your breadboard. 2 minutes and you are done.
Project Owner Contributor