Developing hardware to track and assert the air quality in a city based on IOT topology.

Environmental surveillance is a big thing, important to our health and to the integrity of the world we live in. To optimise the air quality assertion, we need better resolution (more monitoring units deployed) and better sensors. To help resolution, sensors will have to conquer more in the space of wearables but also be part of the places we live in, and that includes cities. This project will document an experimental setup to track pollution, ultimately turning to a device that can be used in cities, based on IOT topology.

This project is a solution to monitor air quality parameters in Cities, compliant to international requirements on computing the Air Quality Index. The hardware is an IOT device equipped with a laser light scattering sensor for Particulate Matter PM2.5 and PM10, and 4 electrochemical sensors for Carbon Monoxide, Nitrogen dioxide, Sulphur Dioxide and Ozone. These 6 parameters are recognised as having a significant health impact by multiple countries, and are part of processes surrounding us in our daily activities. The connectivity is implemented via Wifi and LoraWAN, with two separate PCB versions. The connectivity fits multiple usage scenarios in city deployments.

Air pollution is the single largest environmental cause of premature death in urban Europe and transport is the main source. The 2008 Air Quality Directive, now under review, obliges member states to cut exposure to fine particulate matter by an average of 20% by 2020, based on 2010 levels.
The National Emissions Ceiling Directive caps some emissions including particulate matter (PM) and nitrogen dioxide (NOx) at national level. A revised version of the directive is as of 2016 under scrutiny by the Council of Ministers and European Parliament. Across the EU in 2013, nitrogen dioxide (NO2), which is mostly produced by traffic, caused 68,000 premature deaths. The Dieselgate scandal exposed how Volkswagen had gamed NO2 emissions tests.
Ozone (O3) killed 16,000 and small particulate matter (PM2.5) caused 436,000 deaths in the same year. PM2.5 particles, microscopic specks of dust and soot caused by burning fossil fuels, can enter the lungs and bloodstream.

After several iterations, I have designed a product with 4 electrochemical sensors (4-series) for the 4 gases, and a laser scattering sensor for the fine particles. All sensors are individually calibrated in a test lab, and bare a unique serial number. Calibration data is inserted in the system, and used before presenting the data results. The electrochemical sensors have a lifespan of 2 years, so I designed the PCB with sockets where these sensors can be installed without soldering, so they can be serviced easily. 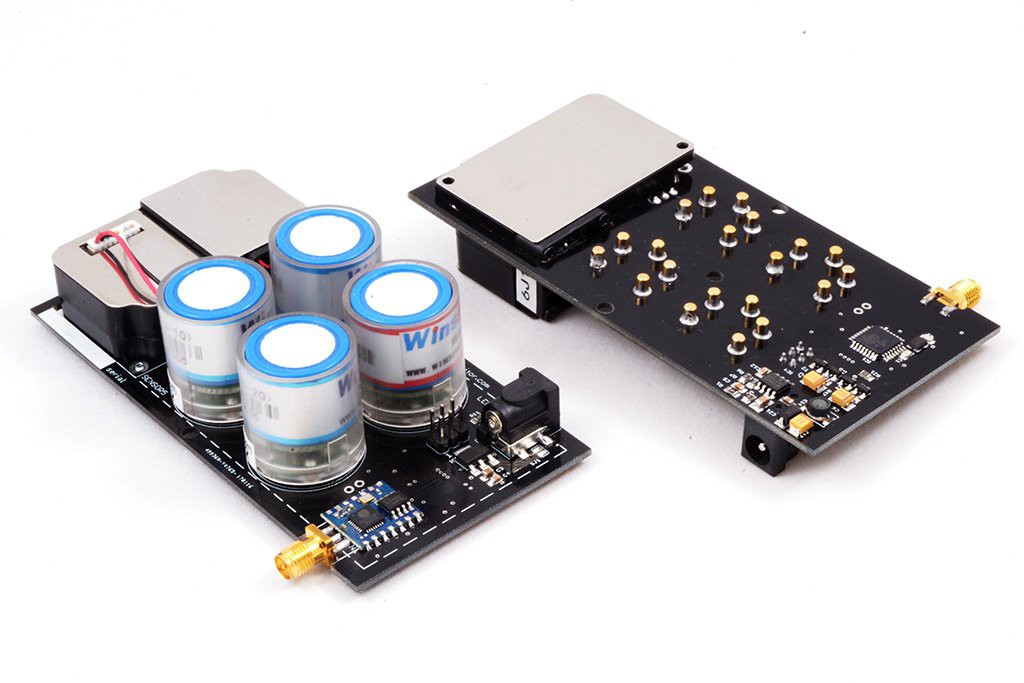 This RF standard operating in 868MHz(EU) / 915MHz(US/Israel/Australia) offers low bandwidth long range data links at the cost of very low power. I had some experience with the RN2483 / RN2903 from Microchip so I went for those. While the specs indicate 15km in open field, ranges as high as 30km are achievable in some cases. The low bandwidth is sufficient for IOT applications, in this case sending 6 air quality parameters over the wireless link.

The data goes to a server where it is modified against the calibration parameters, stored in a database for each sensor, individually, according to the test lab calibration sets. Therefore servicing sensors at the end of their life requires replacing them on the PCBs and changing the calibration numbers in a dedicated dashboard. This makes things very easy.

The server stores all data and offers it via a RESTful API interface. Plotting charts, doing stats or building City Dashboards becomes easy this way.

Here is the final product including the aluminium enclosure I designed, the PCB and the sensors mounted in the sockets: 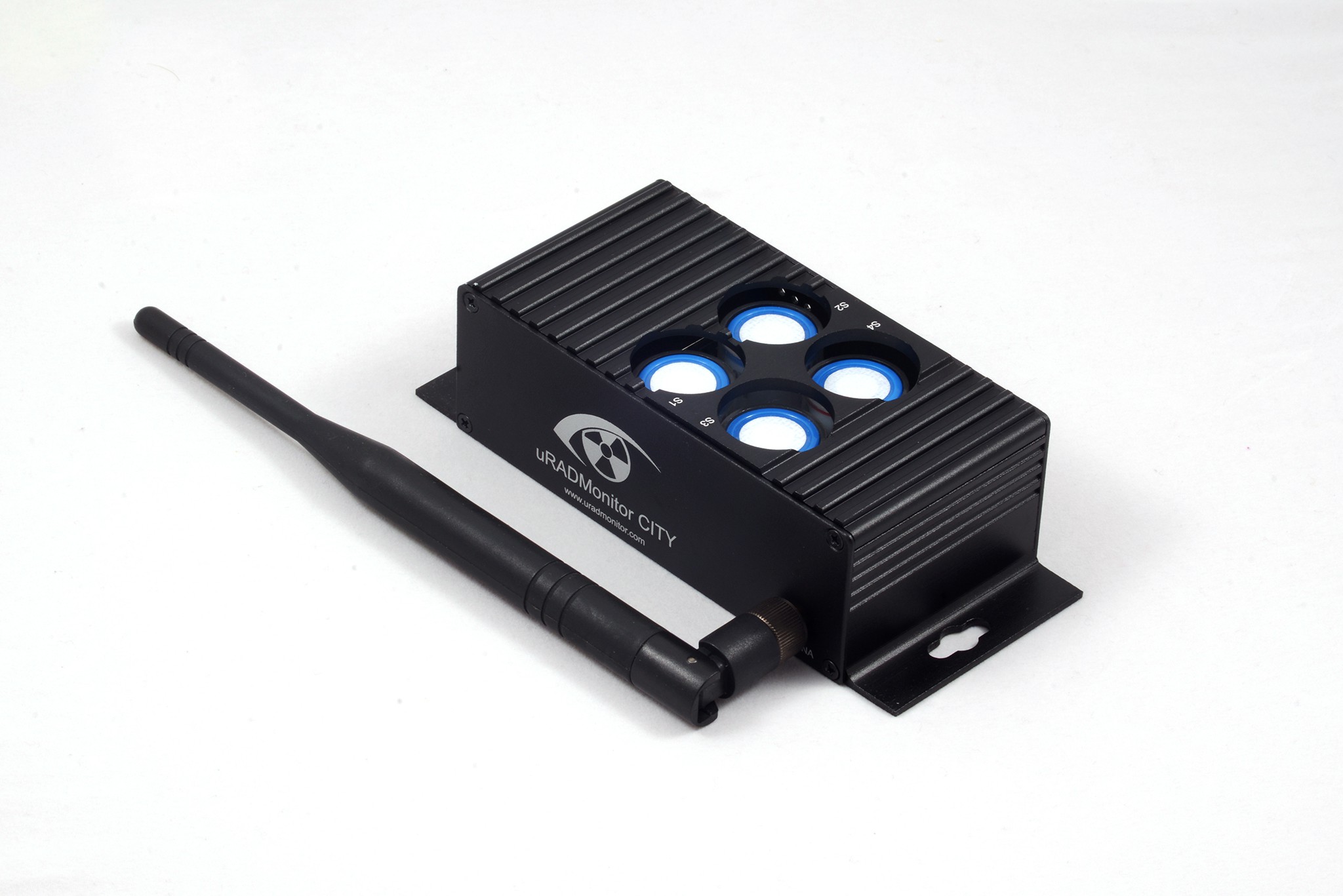 This was a test device, to test sensors in the real environment, collect large amounts of data and see it linked to pollution in various places. The device was installed on a car, thus it was tested on very large distances, gathering relevant data. One such example was my trip to Ciudanovita, presented in one of the project logs.

The plan is to use a VOC air sensor...

Very nice project! Can you provide the PCB files for reference?

I'm using ZE03-o2 sensor with arduino uno in my project. I don't know how to calibrate it and get proper output. Can you please guide me?

how can I obtain the pcb image for manufacture

Can you provide more details please?

Hi Radu, could you please provide a source for your initial statement "Air pollution is the single largest environmental cause of premature death in urban Europe"?

Yes, this is the source: https://www.euractiv.com/section/sustainable-dev/news/23-eu-countries-are-breaking-european-air-quality-laws/

my pleasure. Sorry for the delay.

Hello Radu, nice work and congratulation with what you have done, i was wondering if you can provide some kind of guidance or mentoring about this? I'm looking to build something similar and use this in our country. Our air is 100% contaminated and no one is doing much to monitor and solve the situation. I want to start doing the monitoring.

Absolutely, let me know what I can do to help!

Hey Radu, well done on being one of the Internet of Useful Things Hackaday Prize Finalists!

Thank you! I'm so happy for that.

Really interesting project, are the sensors accurate enough to use for residential road monitoring? From the looks of the comments above it seems not, but I would hope that they work since I would love to try this project. Also it is hard to find those sensors from a quick search, do you have any tips?

Yes, these are digital sensors, each with a unique serial number, being tested individually in a specialised lab. This also makes them more expensive, added to the fact that these are electrochemical sensors. The calibration data is provided in a technical inspection sheet. So the accuracy is guaranteed. See more on the calibration in the last log: https://hackaday.io/project/8334/log/59572-the-sensor-calibration-parameters

Hello! I think the project is great! I want to replicate for my local community! Is there a github repo with the files? Thank you so much!

Hi. It's a really nice project endeed.  But, in my experience, the problem with this kind of project (not yours in particular but every open source air quality ones) is that the sensors used have very low sensitivity. I work as an electronics engineer in my city's air quality department.  We use high end equipment (TAPI and Thermo) for our measurements, and every piece of equipment can measure a minimum of 1ppb or 1ug/m3 of polulant,.  Units used in diy projects often are in the 1mg/m3 or 1 to 10 ppm zone, so It's not ambient air quality at all.  Nevertheless keep up with this awesome project and the good work.

Following up on what Miguel said, did you select sensors based on cost, sensitivity, or size/shape/pinouts packaging? I wonder if more sensitive sensors are available and if yes, at what cost. I'm particularly interested in VOC sensors, to put a tangible measurement on the obnoxious odors we are routinely subjected to in the workplace and elsewhere. Such as formaldehyde, the scents added to laundry detergents, etc.

thank you, this is part of the bigger www.uradmonitor.com . For suggestions, I'd say that it would help you to do the right choices on sensors right from the start, because in the end the important thing you are building is the data collection. And that needs to be as accurate as possible , if it is to have any value. Good luck!

Thank you for your reply. I wasn't too keen on sensors. Your suggestion sure is helpful.  Thank you - yawar

A really nice project and intuitive. I am currently planning on building a similar thing. I am using Arduino as my base. I am intending to measuring air quality and radiation. Do you have any suggestions or any thing that I should keep in mind in regard.  - yawar

Hello Yawar, it might be easier to start with this other project instead: https://hackaday.io/project/7935-open-source-iot-platform