I planned to extend the uRADMonitor network and go from Radiation monitoring to Air pollution. Back in 2015 I was creating the "Portable Environmental Monitor" a HAD Prize Finalist. As a continuation of this effort, here's a new addition to the family of uRADMonitor detectors. Named A3, this is my forth hardware product, a new IOT devices that adds powerful sensors and new connectivity options to map the air quality. It was part of the Alba Iulia smartcity implementation, in Romania, in a joint effort with Orange.

Finally, both attempts that failed in HW104 were brought to a solution. A sound amplifier circuit based on MAX4466 allowed good dBA noise calculations, while a new VOC sensor was tested, with excellent results. Finally, the uRADMonitor A3 has noise pollution detection capabilities:

Picture shows elevated readings due to auto traffic during day, with data from two nearby units functioning concomitantly.

I wanted to add a sound sensor, and find an alternative to the VOC detection currently implemented with the BME680 from Bosch. I tried an electret microphone amplifier circuit and the GM502B sensor, but wasn't happy with the results. Design dropped.

The enclosure was reworked as well, to use a new profile that comes with wall mounting brackets. The one that came closer to my size requirements had a smaller width and this impacted the new PCBs. I also made two types of enclosures, one with a rectangular opening for the Ethernet cable connector, and one with a round hole to fit the SMA antenna connector, serving all 3 radio variants.

The sensors in these units stayed the same. Bosch BME680 for temperature, pressure, humidity and VOC, the laser light scattering sensor for PM2.5, the NDIR CO2 sensor and the electrochemical formaldehyde sensor. The SI29BG Geiger tube remained responsible for the radiation readings. This tiny unit of about 11cm long, was therefore capable to measuring 8 air parameters, sending the data over 4 distinct channels: Ethernet, Wifi, GSM or LORAWAN.

The system drew the attention of Orange, and I started a partnership with them to install several such units in a few cities. One such example was the city of Alba Iulia, the first Romanian smart city, where 15 A3 units were installed in public transportation. The data is available online, here.

This became an excellent way to use my toys in the real life environment, but also to learn to raise up to the challenge of making everything work as expected. Some time after, the system is still functioning unattended, providing precious readings on the air quality. For a few months I was busy building by hand a few tens of these devices, running tests and making sure everything is perfect. But it was worth it, and I'm proud of the accomplishment. 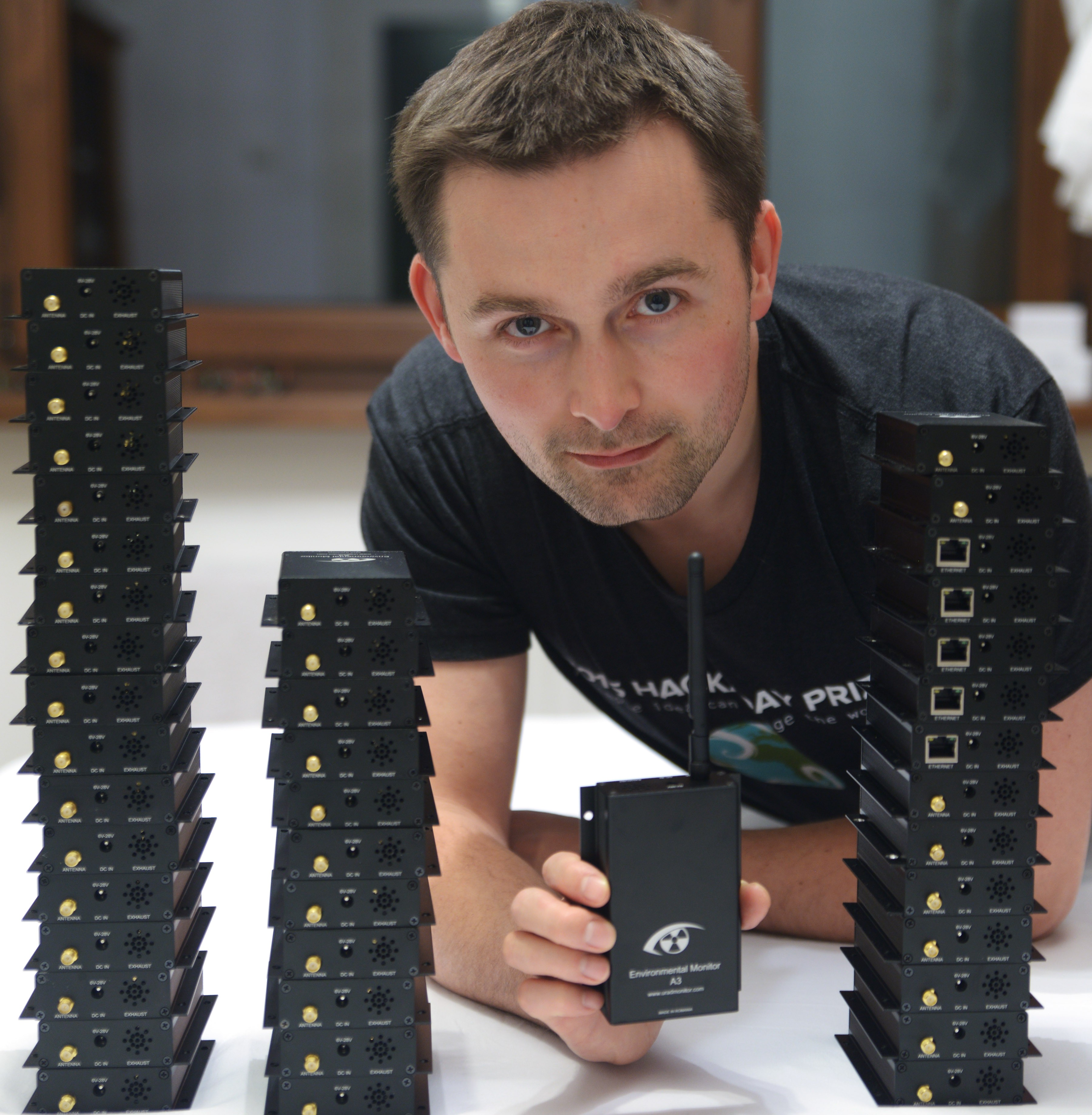 And talking about the data, here are some of the tests, showing the output from several devices running in parallel. These are PM2.5 measurements, counting particles as small as 2.5 microns in diameter, and you can see the devices agree on the values:

These versions had some issues. First I tried to use the previous HW100 design, and add extra connectivity options: instead of the Ethernet module for wired connectivity, I needed more options: Wifi, GSM and LoraWAN. Replacing the Ethernet module with modems for the radio variants was easy, but I placed the 8MHz crystal oscillator too close to the High voltage inverter...

I saw you moved to SMD components for your HV generation. Would you mind sharing which components you used?

Mainly they are 0805 sized components, for the HV feedback I used a stream of 4 4.7M 0805 resistors, while for the tube resistor, a series of 4 2.7M resistors. There's also the voltage multiplier that uses HER108 SMD HV fast diodes, and X7R 10n / 1KV capacitors. The rest is easy, but let me know if you need anything else.

Thanks for the very quick reply! I'll order some of them and try to get my SI-8B to work!