You know that calibration point on your 'scope? Well actually it's a tiny power supply. Here is the adapter and it's cheap!

From multimeters to scopes. Your test equipment projects go here!

I was needing a 32768Hz source to trigger my scope, yet I didn't want to resort to a lithium coin battery like my previous application using the DS32KHZ integrated oscillator. Then I realised I could just avoid the whole battery thing if I considered the 2Vpp calibration point as an AC power supply...

Considering the very low power consumption of the DS32KHz, a simple charge pump made of very low-drop diodes is enough to get about 3.6V.

This gizmo lets me tune 32768Hz oscillators, as shown on this video:

The original project is there: Integrated 32KHz clock source but the battery is a major practical problem. The battery

So I designed a tiny charge pump, and I don't have to care about the battery.

Actually, the probe test point is not real AC so it's hard to rectify like a 0V centered sine. A total of 3 diodes and 3 capacitors are required and can provide maybe 100µA (I should plot the I/V curve). More than enough for the DS32KHz rated at 1µA, and some other simple circuits (a µC maybe ?). 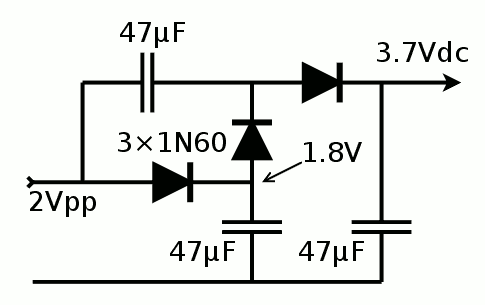 I initially used 100nF capacitors and I measured about 3.7V with no load. Well apparently, 100nF is nice for a proof of concept but this barely lets the DS32KHz startup. I replaced all the capacitors with 47µF and it works like a charm!

The average voltage will drop with a little load and ripple will appear. But that's inherent to all charge pumps. A dedicated high-efficiency integrated circuit, a ICL7660 or a Joule Thief would bring some benefits but simplificy, cost and speed of development/implementation are other key parameters.

Other techniques are possible, such as a direct connection to a transformer to elevate the voltage but the frequency (1KHz on this scope) is usually too low...

I chose to not regulate the output further. The 47µF should smooth the power enough and the DS3231 is not an ultra-precise timebase so any futher regulation will not provide any advantage, cost more, draw more power->increase ripple etc.

I have low-power regulators but the DS32KHZ draws so little power that the ripple is not significant. Of course this will also depend on the make/brand/design of the scope (are there 1Vpp versions ? more capacitor stages then). But the DS32KHZ needs from 1 to 4µA in operation, at 2.7 to 5.5V according to the datasheet, which has the following illustration: 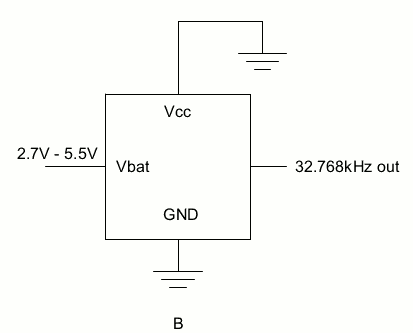 Deviation of the rated frequency is expected to be the least around 3V, so 3.6V is not far and precision does not suffer much. I repeat, it's not designed for extremely precise tuning, just to get within a fraction of Herz...

Per the datasheet: "The DS32kHz I CC and I BAT currents are specified with no output loads." Since the 'scope's input impedance is 1M Ohms, the output will draw 4µA@4V (divided by two due to "almost 50% duty cycle"), which must be added to the internal consumption.

I see a periodic dip of the square trace and this corresponds to the 450µA drawn to measure the temperature and adjust the clock's capacitance. See the log Power dips, NOFIX

I don't have a digital scope so i can't capture the duration of that dip, it appears too infrequently to be observable on a phosphor tube...

Economy comes from reusing available parts, such as a half crocodile clamp/wire and a segment of BNC coax cable (from an old broken scope probe). Overall it takes more room but it does not require its own probe or something... There is no detachable connexion but there is enough length to reach across my scope, from the probe test point to the external trig input BNC.

Now I'm waiting to see how long it takes for this gizmo to be sold for $2 by Chinese sellers on aliexpress and eBay :-D

I consider this project "completed" because it delivered the required features, which were pretty small, but the circuit deserves a project on its own.

The adventure does not stop here however since I started #Active scope probe with no dedicated power supply which will also contribute to my study of crystal oscillators !