Twenty Finalists of the 2019 Hackaday Prize

Blackbird is an open source, low-cost bipedal robot capable of high resolution force control. It is a research and education platform designed for college and post-grad students interested in studying the advanced field of robotics. Using a novel custom actuator design and supporting software, the system is capable of matching the control requirements of modern research robots for a fraction of the cost by replacing expensive hardware with complex electrical-control solutions. We have implemented multiple algorithms that allow the platform walk, run, spin, and jump based on modern research methods. Most of the design is 3D printed, including the actuators, which allows it to be easily manufactured by students and enthusiasts.

Blackbird is a new bipedal robot that specializes in high bandwidth force control and capable of meeting many of the expected demands for legged robots. As a result of its motor design, the robot can use virtual control models that allow it  to replicate the compliant properties of springs, dampers, and torque sensing hardware without any extra costs (just math). The reduced mechanical complexity gives the robot a minimal design capable of high quality locomotion, perfect for research labs, college classrooms, and rapid prototyping in industry. We designed the OpenTorque Actuator specifically for high torque scenarios that rely on high backdrivability; a key criteria for effective legged locomotion. Rather than relying on expensive sensors for measuring motor torque, the system relies on its quasi-direct-drive nature to create high resolution estimates of torque. This proprioception keeps the price of the actuator low, without sacrificing torque sensing capabilities, and also boosts the effective bandwidth of the actuator (allowing it to react faster). 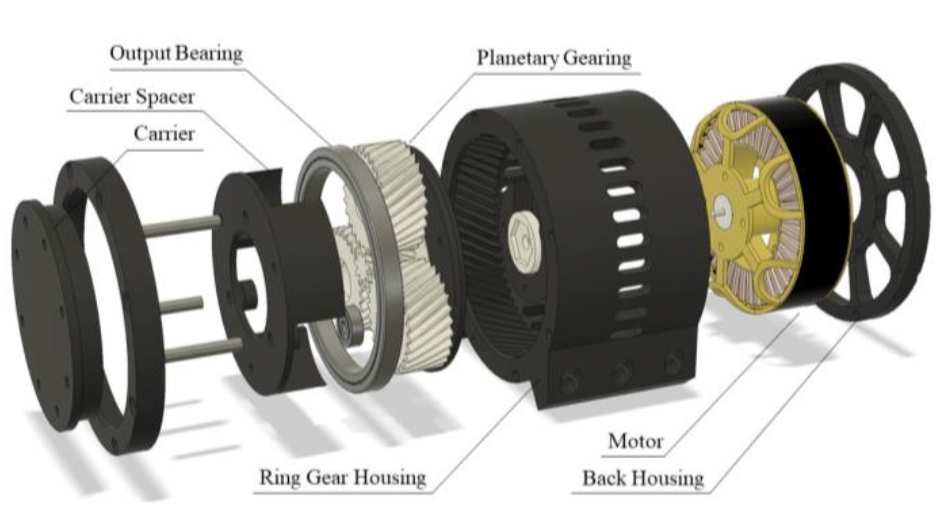 Regarding the walking problem, we have developed two walking controllers for the robot. The first one is a reduced dynamics model based on the ATRIAS and CASSIE passive dynamics. Mathematically, this control method works well for environments with stairs and multiple unstable terrains. The second controller is a Model Predictive Controller (MPC) that can be used for more complicated maneuvers, such as jumping and walking while spinning. MPC relies on online optimization techniques to find the best force distribution that meets the desired user

Blackbird stands 1.2 meters tall and weighs roughly 15 kg. Its estimated operation time is 2.5 hours with a 400 Wh battery. The total BoM cost is less than $3000, which is significantly less than any human sized bipedal robot capable of high quality force control. For reference, a single HEBI X-Series Actuator, which uses Series Elastic Technology, is about $3000 and is close to equivalent in force sensing capabilities.

OpenTorque has a control bandwidth of approximately 30 Hz (3x-4x greater than that of a human) and is larger than many legged robots in the research community. For comparison, some of the best quadruped robots: ANYmal (SEA), HyQ (hydraulic), and StarlETH (SEA) actuators have maximum force control bandwidths of 60 Hz, 20 Hz, and 25 Hz respectively [higher is better] but are exclusive research tools and cost $X0,000+.

Each of Blackbird's legs has 5 Degrees of Freedom (DOF), totaling to 10 actuated DOF for walking. The system is capable of walking, running, spinning, and jumping as a direct result of the actuation hardware and control schemes used. We have also verified it's ability to operate in common human environments by executing maneuvers such as climbing stairs. Testing shows that the robot is capable of maintaining its balance even after receiving a 20 Pound (lbf) kick to the body.

Since the robot is too inexpensive for industry settings, we hope that this platform can be used by students, researchers, and professionals interested in legged robot development to learn, test, and verify different control schemes or software stacks. We believe that hobbyists and researchers can hugely benefit from access to a low-cost, highly capable biped platform like the Blackbird, especially since there are no other bipedal robots on the market capable of equivalent force control per dollar. Locomotion is first and foremost a design and control problem long before it is a vision or AI based one. We hope that Blackbird helps bridge the locomotion gap by providing an effective platform for engineers and computer scientists.

We have also begun working Blackbird 2, which will use a new patent-pending motor design and more robust materials (injected molded plastic and aluminum) for a stronger frame...

If this project is OpenSource, where are the software sources? - because I was searching a lot and I could not found them. Thanks.

hi  is it possible to upload the code for jumping robot ? thanks in advance

Hi! Great project. I'm curious, why did you replace the four bar linkages with belts?

Was it radial play in the bearings? Positioning issues because of the CF tubes?

Very exciting project! If you run into issues with PyBullet let me know. It would be nice to include your simulation as an example in PyBullet.

Are you simulating motor dynamics in your videos? Great job by the way.

There are some very soft motor dynamic considerations (i.e acceleration ramp), but we are not simulating the full motor dynamics (i.e something like cogging torque).

Really impressive work! I'm working on a very similar robot https://hackaday.io/project/163093-tiptap and am learning a ton from reading up on your work. Looking forward to seeing your updates!

That project looks really great! I am doing some machine learning experiment with Pybullet where I try to control a robot that is using servo motors instead of those awesome (but expensive) backdriving capable motors. Would you consider sharing the pybullet model? I would love to run an AI algorithm on your robot! There has been some very successful control of complex legged robots with joint torque control using a neural network such as this: https://www.youtube.com/watch?v=__ilQzkPDNI . The advantage of those neural controller is that they can be trained to be very resilient to external disturbances.

I uploaded the URDF to the files section.

It would be awesome if you can get AI walking control to work. I tried reinforcement learning (OpenAI PPO) and neuroevolution (ESTool) and I couldn't get either to work reliably. It learned how to take a few steps, but it was very unstable.

I plan to revisit AI control in the future, but combine it with the SLIP controller to get the best of both worlds. I think the reduced dimensionality of the SLIP model would help it learn much better/faster.

People used to use look-up table (or multivariate polynomial) to record the SLIP model behavior, the other way is to use neural network. I tried something similar, actually it works, with lower dimensional model, it works pretty well. I am trying to implement it in pybullet. Maybe then move directly to your blackbird since you already uploaded your urdf model.

Thank you! I will report back if I am having any success. I am working on a simpler robot controlled with RL first, a two wheel balancer (Balboa 32U4). There are a lot of papers using RL for robot control in simulation, but few use actual robots. You might be interested in the code I wrote for motor simulation here: https://github.com/charles-blouin/servorobots/blob/master/servorobots/components/test_motor.py. It is based on an ideal motor model with viscous and load friction. I wrote in the comments how the friction and motor constants can be obtained with two simple tests. I also implemented a delayed response (according to some papers, the NN does not transfer from simulation to reality if the delay is not taken into account).

I may be easier use a neural network for control later if you can use a Raspberry Pi to control of your robot,. Tensorflow now has packages for Raspbian. I wrote a small script to export the NN weights trained with Open AI PPO (https://github.com/charles-blouin/servorobots/blob/master/servorobots/tools/export_weights.py). They can then be reimported as a text file on the RPi and the NN can run with TF in a relatively straight forward manner.

Good luck with your project!

Loving this, reminiscent of Cassie (minus the series-elastic components). Watching with interest.

Our goal is to modify FURBY toy manufactured by Hasbro Inc. and equipped him in a custom controller that allows to control him form PC.
Project Owner Contributor