Innovation at the core.

With the sigrok project, BeagleLogic gets support for software triggering and decoding a large variety of digital communication protocols. There's also a small web interface that allows plug-and-play debugging if you are not capturing tons of data once everything is up and running.

I recently designed a cape to help interface BeagleLogic with external circuits and protect the BeagleBone from 5V circuits. You are seeing the photos of the cape.

The possibilities with BeagleLogic are great, and this page should follow future development of BeagleLogic as it gradually evolves with more cool features.

BeagleLogic is a part of a vision of inexpensive Single Board Computers being repurposed as a useful debugging tool, a logic analyzer. It should be the first in a series of tools to make high quality, feature-rich and well-connected instruments accessible to more people over a familiar Linux environment. I see BeagleLogic as an educational tool that can help in understanding digital protocols as well, as one can use the same BeagleBone to send SPI and I2C signals which can be looped back into the inputs to BeagleLogic.

BeagleLogic is delivered as a combination of a ready-to-run BeagleLogic System Image (Software) that can be flashed onto a SD card and which is preloaded with the kernel modules, firmware and software necessary to run BeagleLogic right after the system boots up and a BeagleLogic Cape (Hardware) that logic level translates 5V signals so you can debug 5V logic circuits with the BeagleBone Black.

This infographic compares BeagleLogic to other leading Logic Analyzers: 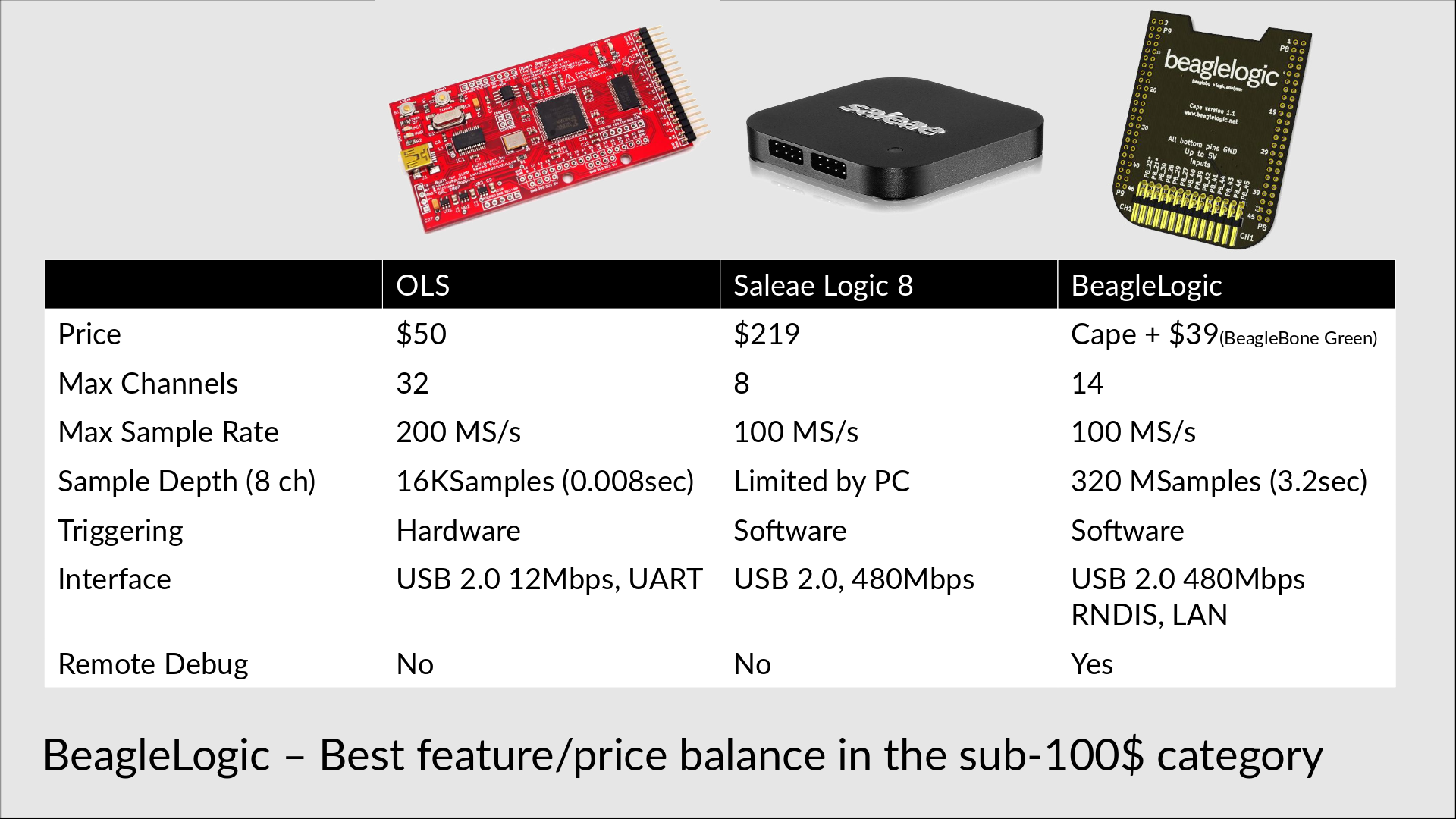 BeagleLogic makes use of the powerful sigrok library that provides a standardized interface to DMMs, scopes and logic analyzers. For logic analyzers, sigrok tools support decoding over 50 different digital protocols (see complete list here) for supported protocols. Since BeagleBone runs Linux, it can run the whole sigrok tool set by itself, but it is usually better to process data on a PC as it's faster.

There's a series of technical explanation walkthorughs on my blog that detail how BeagleLogic works:

Here's a system-level block diagram that explains how BeagleLogic works:

Each component of the project as seen above is individually licensed as follows:

(i) The PRU Firmware is under GPLv2 only license.

(ii) The Linux Kernel Module is under GPLv2 only license.

(iii) The sigrok bindings form a part of the sigrok suite, so fall under GPLv3 or later license.

(vI) The BeagleLogic logo on the PCB and the video (created by me with Inkscape) is licensed under CC-BY-SA-4.0 http://creativecommons.org/licenses/by-sa/4.0/

I'm looking into building a BeagleLogic myself
from what I understand the one thing holding back the V2 schematic is the HV clamping for 12V / -12V inputs
any news on where this might be up to. If it's still in progress do you know which IC your planning on using for the HV clamping?

Edit, it looks like the Saleae Logic Pro uses a series of individual Fet's to buffer the input for a max range of 10V to -10V, then feeds the inputs via a series of ADA4891-4 comparators

Hey there! I'm a big fan of your work, and want to learn from it for our ultrasound imaging dev kit - where we need ADCs at 20Msps =)

And... as a miracle, Abishek managed to get the board of my dreams at https://google-opensource.blogspot.fr/2016/07/announcing-open-source-adc-board-for.html ! Well done, my friend, well done!

And... work closed! I've been using the Beaglelogic distrib dedicated to PRUDAQ, and have been getting the setup to work and get ultrasound images https://hackaday.io/project/9281-murgen-open-source-ultrasound-imaging/log/44528-getting-an-image-from-an-ultrasound-fantom !

The github link in the project description is cut off :(
I suppose that happened when our evil overlords forced a hard limit on the length of description.

Fixed, and the new link looks much better now :)

It has been reported to me that BeagleLogic has been successfully tested on a BeagleBone Green, however I have not tested it personally as I am yet to get one.

If you try it on a BeagleBone Green and face any issues let me know through a PM so that I can fix it.

Kumar, Abhishek wrote 09/21/2015 at 21:52 • point
I'm finalizing the revision 2 design which I've just announced in the project logs - https://hackaday.io/project/4395-beaglelogic/log/25553-new-revision-of-the-beaglelogic-cape-wip . As soon as I validate them it will be immediately released for pre-ordering.

Just an awesome project. Thanks Abishek_!

For those that don't know, this was originally done as a Google Summer of Code project. To learn more about GSoC, visit http://beagleboard.org/gsoc. Patches welcome.

A big thanks to you, the BeagleBoard community and Google (Summer of Code) for helping bring the project to reality!

The 3.8.13 is as of now the only version of the Linux kernel on the BeagleBone Black which allows dynamically loadable/unloadable capes using "device tree overlays" as of now. However the overlay thing was hacky and couldn't make it to the mainline then.

Developers from the BeagleBoard community are working on getting dynamic device tree loading/unloading into the upstream kernel, and there has been progress lately (http://www.spinics.net/lists/kernel/msg1927792.html)

The BeagleBone Black should technically be able to load the latest kernel and boot from it, but the drivers for PRU for the remoteproc subsystem (which is used by BeagleLogic) aren't there yet. It is planned to port the drivers and establish a framework which would make it to upstream (which is the reason I put it in the form in the first place), but there is no definite timeframe for this. Once the framework is in place upstream, BeagleLogic should follow soon.

On your interest form, I voted for support for kernels beyond 3.8.13. I'm curious as to why it doesn't currently support any kernel version that came out in the past two years (according to Wikipedia), especially when that version is not a long-term release. I'm not an embedded Linux expert, so maybe newer versions of Linux just aren't available for ARM yet…?

Simple FPGA based PCB to capture thermal images from a FLIR Boson camera on to a microSD.
Project Owner Contributor