The goal of this project is to develop a low cost, portable, compact light sensor to measure vertical patterns of photosynthetically active radiation (PAR). The instrument will be designed to be easily operated from just about any platform, boat, kayak, canoe or even an inner tube. From these measurements the downwelling attenuation coefficient (Kd) can be calculated, which describes the rate at which light is lost as it moves through water, an important indicator of light availability. In an effort to explain the changes in light availability the instrument will also include two fluorometers, to estimate relative or absolute concentrations of chlorophyll and colored dissolved organic matter (CDOM), and a backscattering sensor to estimate turbidity.

Light availability is an important characteristic of aquatic ecosystems and is particularly important for photosynthesizing organisms, like submerged aquatic vegetation, and organisms which rely on them for food and/or shelter. Changes in light availability can significantly impact ecosystem functioning in both freshwater and marine environments. The causes of changes in light availability are numerous but can commonly be attributed to algal blooms, suspended sediments or dissolved substances. These phenomena can be caused by both natural events, like nutrient upwelling, or human activity, such as increases nutrient deposition (fertilizers, sewage discharge…) and sediment laden runoff from impervious surfaces. Despite the importance of light availability, directly and accurately measuring the optical properties of water is costly due to the expensive equipment required, furthermore many current instruments are large and unwieldy making operation offshore difficult without boat. PULSE will allow citizens to actively monitor important properites of their local waterbodies for changes that may have damaging ecological effects and allow for more rapid mitigation.

The instrument will consist of two components: a base station and a profiler.

The base station serves two functions, the first is to concurrently measure light intensity at the surface while the profiler is traversing the water column and to record the measurement location using a GPS receiver. In theory, under unchanging sky conditions, a base station isn’t necessary because we can use the above water irradiance values from the profiler. However perfectly clear skies are not common therefore being able to account for these changes during measurement is important. 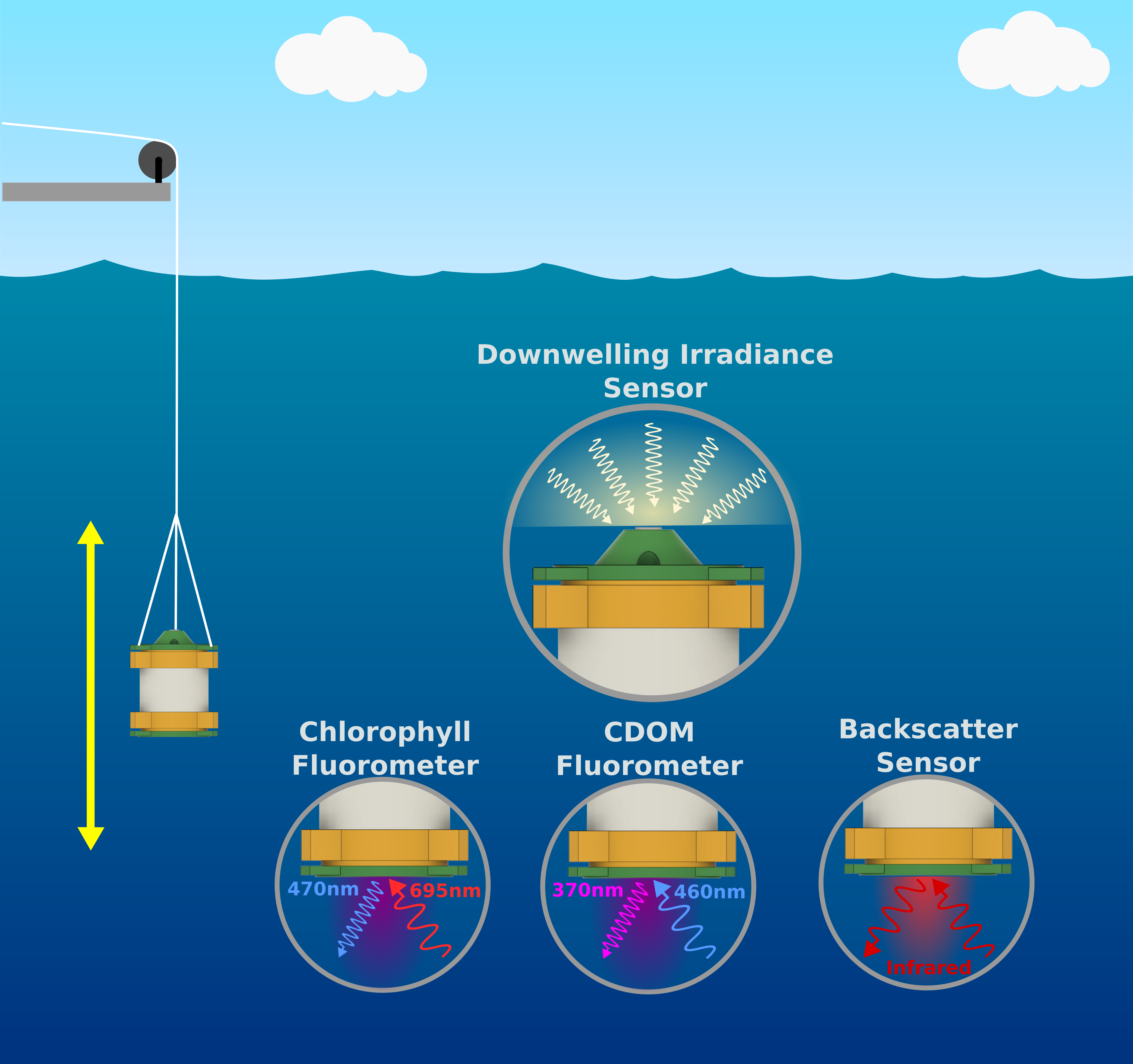 While doing some research for the enclosure design I came across the Cave Pearl Project, from the Hackaday Prize 2015, and took inspiration from Edward’s design. Because I need custom sized ports on the top and bottom of the profilers for the photodiodes, LEDs and pressure sensor, I decided to 3D print the caps along with the collars onto which the caps will be bolted. 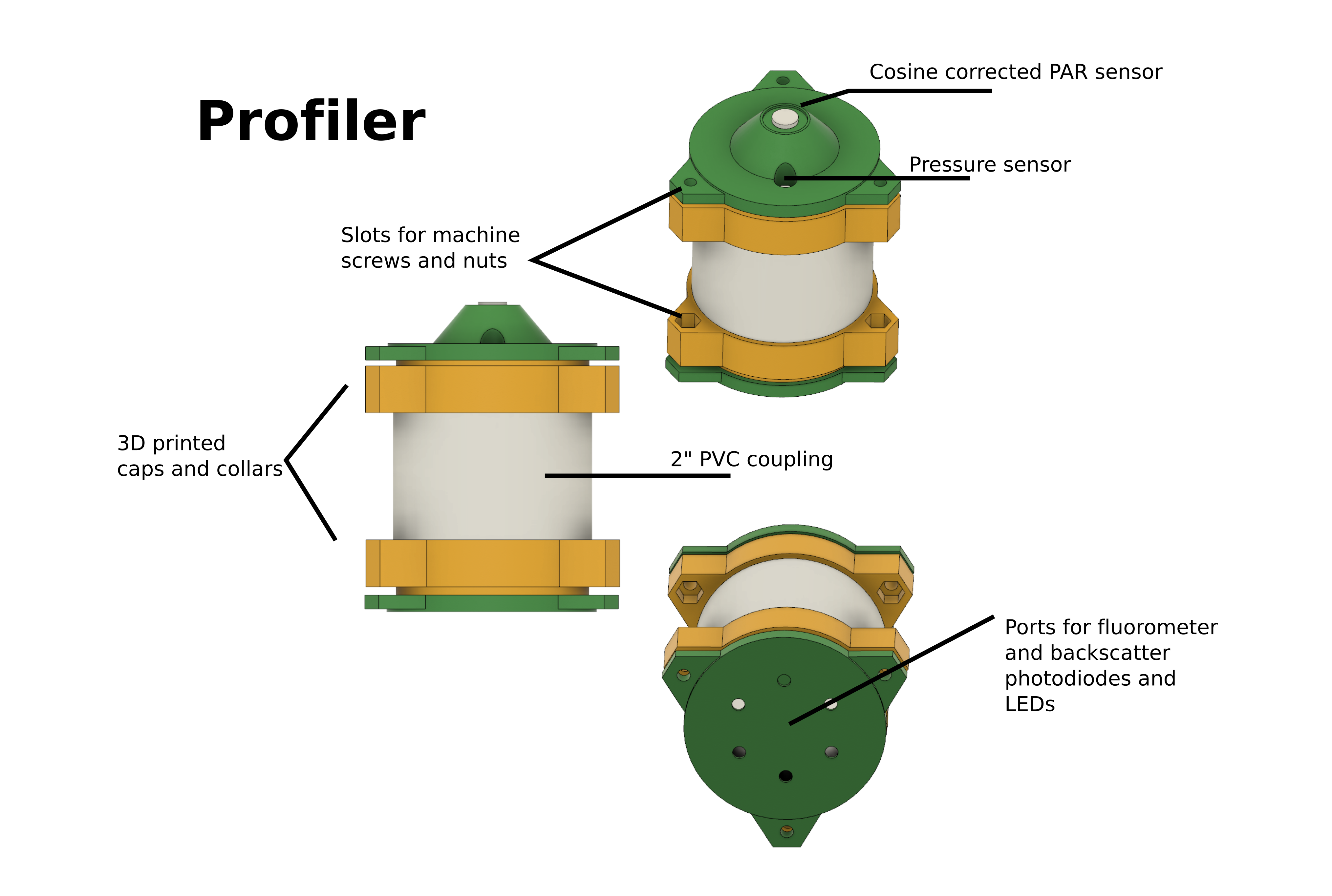 I’m testing out methods to waterproof and strengthen the 3D printed parts using epoxy resin. To provide a seal between the caps and the collar I plan on using silicone for the gasket. The body of the enclosure itself is made from a 2’’ PVC coupler which is wide enough to fit the electronic components inside (Arduino Uno, shield and batteries). In reality I only need one of the two caps to be removable and could have epoxied bottom cap to the PVC coupling but I want to have easy access to the photodiodes and LED on the bottom. More on the design of the enclosure at a later date. 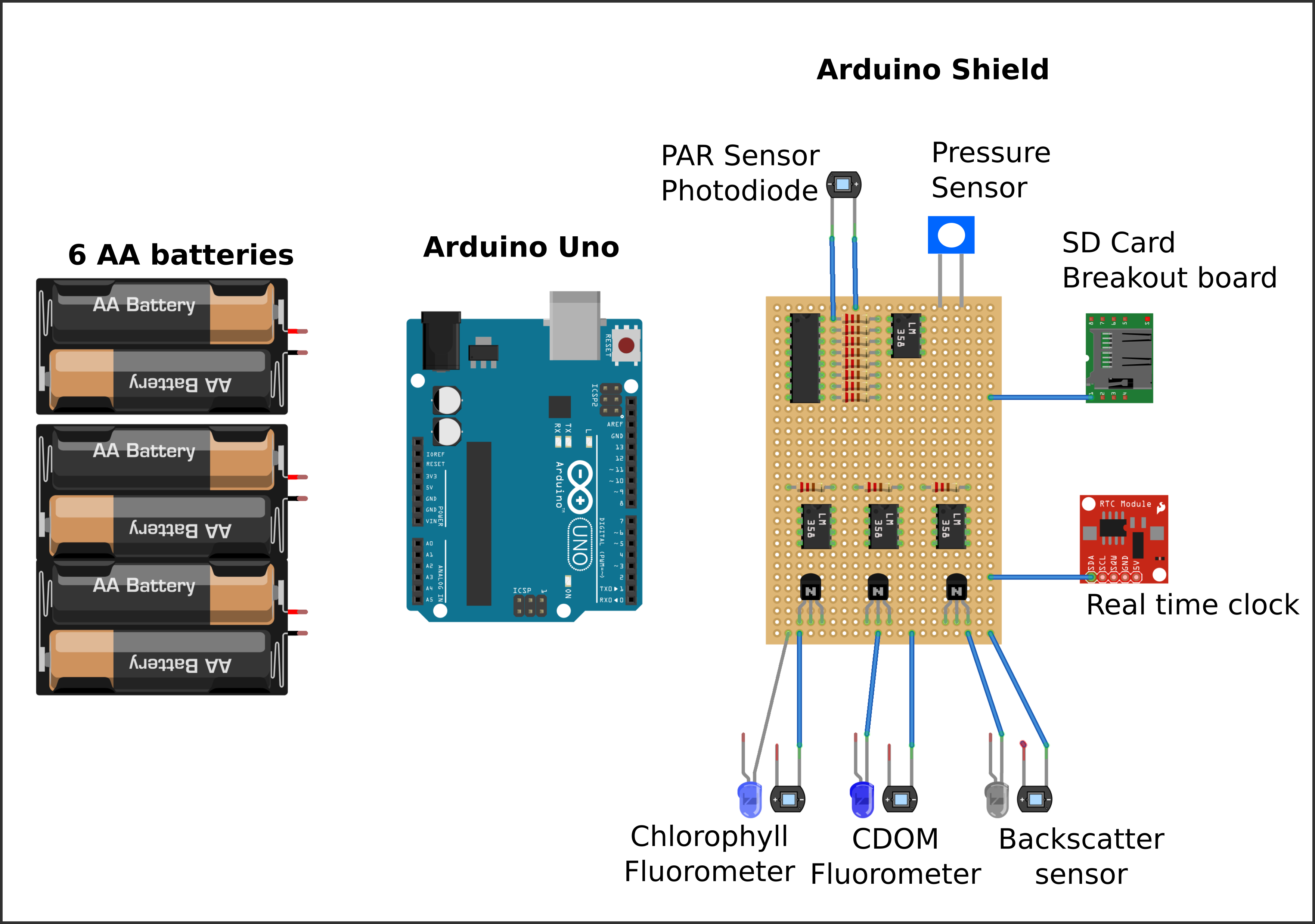 The Vishay sensor you're using has a very bad spectral response for PAR measurements. It almost cuts out all of the blues. This causes light sources with the same PAR to read differently with your sensor (e.g. HPS vs CMH bulbs). I've seen sensors that were better in the blue region, attenuating to at most 40% (instead of the ~30% of the BPW 20), which is still not ideal.

Furthermore, the bandpass filter you're using cuts too much of the reds. 650-670nm is an important wavelength in LED fixtures. Your filter blocks almost all of it.

So cool dude ! Thanks for sharing this ! I am trying to replicate your work to build a PAR meter for measuring light intensity under my greenhouse. I would like to know why you used two power supply ? (the 5Vdc of the Arduino to supply the mux/demux and the external one to supply the AOP as you could have used the 5Vdc of the Arduino to supply both chips) .. Could I get the code you used for the arduino multiplexing as well as the schematic related to the board to better understand how it works ? Thank you

What does the circuit for the fluorometer photodiode look like? I tried replicating the one made by Leeuw et al but to the circuit did not work.

It is a simple transimpedance amplifier circuit like the one described here:  https://www.digikey.com/en/articles/techzone/2017/jun/how-to-design-stable-transimpedance-amplifiers-automotive-medical-systems

Hi Adam, while doing this project have you come across any robust ways to measure water transparency/turbidity by any chance?

Most of the methods I found use some type of emitter/detector setup to measure backscattered light. Here is a good overview:  https://or.water.usgs.gov/grapher/fnu.html

Incredible project. Is it still going? Very interested to hear some more about the progress and testing.

Thanks, unfortunately I had to put this project on the back burner, so not much progress has been made, but 'm hoping to be able to return to it one of these days.

I really hope you do or at the very least pass the torch. This could be very valuable. Good luck!

Very cool.  We are starting a similar project but with fluorescence measurements of sediments/benthos and looking for help.  Send a PM to me if interested.  We have grant funding and possible scale for capital.

Love the simple, affordable engineering. In our area, we have tremendous problems with sewage water runoff into streams and lakes. Any thoughts on possible affordable methods of detection of sewage / E.coli / or just simple informative  percentage of household wastewater being present? This is a complex matter, but the water here smells like detergent or laundry. Are there possible fluorescence properties of detergents, or does absorbance in certain wavelengths tell a story of the levels of dirtiness? Thank you for any hints.

In this project, a rain and ice sensor is implemented by analyzing the reflection of an infrared (IR) light source using GreenPAK™ SLG46620V
Project Owner Contributor

How to Program a IR Windshield Rain Sensor

The goal of this project is to accurately measure and characterize the 120hz flicker from a variety of light sources.
Project Owner Contributor

Numerous studies have shown that flickering, Although high frequency and then totally invisible, It can also cause headaches, eyestrain...
Project Owner Contributor