Originally started as a smart controller for a small hydroponic system I had setup in the basement last spring, more important things came along and it got scrapped. Given the new theme for the Hackaday Prize this year I and re-envisioning HydroPWNics (formerly OSHydroFarm) as a cost effective intelligent, internet enabled, and autonomous garden control system. The focus of this project is the electrical system and the software that makes it work! 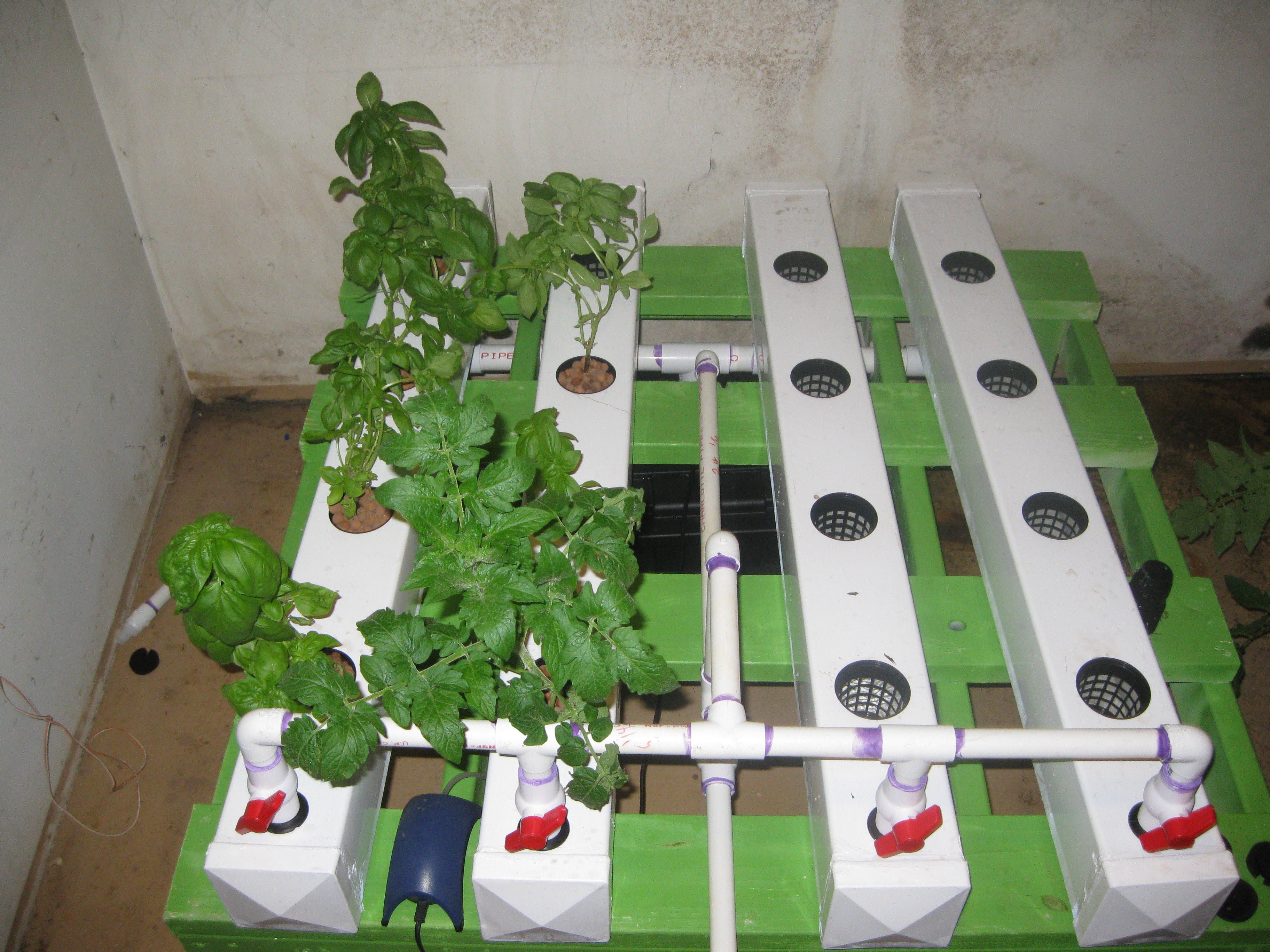 More specifically HydroPWNics is the system of hardware and software designed to control and monitor hydroponic gardens. The goal of such a system is to create a precisely controlled automated hydroponic garden. The benefit of such a garden would be autonomous food production, self-sustainability, and conserve water as a resource. The system consists of custom electronics and software integrated with and builtd on top of the already existing Neuron Robotics development kit. Hardware consists of the Neuron Robotics DyIO module, the HydroPWNics modules, and a Beaglebone Green. The DyIO is used in the AC power control box subsystem. The HydroPWNics modules are used for wireless plant and environmental sensing, and the Beaglebone Green runs the Java application directing all the hardware. The software consists of a Java application running on the Beaglebone Green for controlling the garden and a webui/website for viewing plant data and controlling the garden remotely. The Java application is written in the Neuron Robotics SDK and the HydroPWNics API, this application is what controls the garden, directing the hardware modules (DyIO, HydroPWNics modules) and sending plant data to the cloud (http://www.vivaplanet.io/).

HydroPWNics was started with the idea of creating an autonomous hydroponic garden. The purpose of such a garden would be for the autonomous and ultra-efficient production of healthy food produce. Modern human beings have busy schedules, may lack the expertise for agriculture, or be in a location that makes it difficult. HydroPWNics aims to be a complete open source autonomous hydroponics garden using the nutrient film technique method to save water. Developing nations could possibly make use of such a system to maximize food production and save huge on fresh water, a scare resource in some nations. Thought not initially, HydroPWNics will evolve into a solar powered system, further extending its efficiency and making it more energy friendly. By virtue of being open source HydroPWNics and every subsystem it incorporates is available to anyone everywhere. Additionally the basic components of the system are designed from parts easily source-able at hardware stores aside from the electronics.

Detailed Breakdown of The Whole System

The HydroPWNics Cape turns a Beaglebone Green (or any Beaglebone really) into a base station and system controller for HydroPWNics. On board there will be two WiFi modules, one module will be for connecting the Beaglebone to the internet via the home WiFi network the other module will be for creating an adhoc network for connecting to SunLeaf modules. Also on board there will be power management circuitry to run the whole system off a battery if power is lost , a set of MOSFETs for relay control, and a RepRap discount display connector (hello incorporating existing open source tech ). 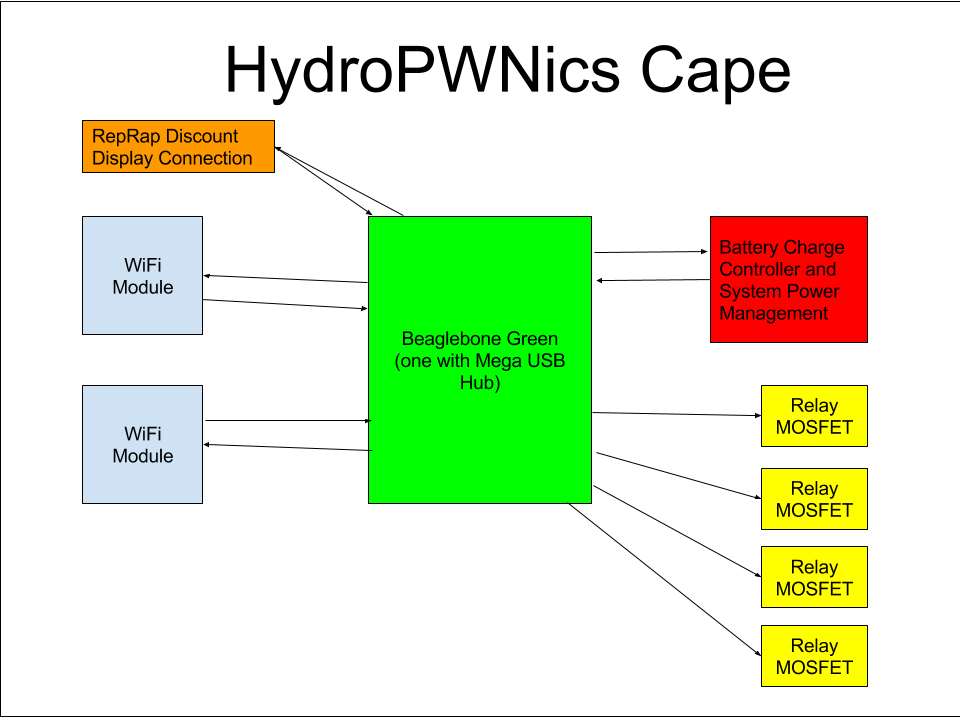 Sensor interfacing will be accomplished with SunLeaf module, a project born out of HydroPWNics for general purpose sensing applications. For use in the HydroPWNics system the SunLeaf modules will be flashed with a custom firmware and configured to run off a power supply feed rather than a...

how can I get all the modules in Indonesia? and how many! thks

Check out HYDROPONIC.io . It's Currently up for sale and fits you nicely.

Hey, just wanted to let you know, I've used these fence post covers before for hydroponics, the ones I used had a real rough texture inside and became a breeding ground for algae, super easy to work with though, pain to clean....

Hey thanks for your interest in my project and the heads up! , The insides of these fence posts and endcaps are just plain PVC and their are bout as smooth as regular PVC stuff.

Great work on the documentation, very easy to follow your vision. It is interesting to see how you are using another Hackaday project, DyIO Module, integrated in your design.

Thanks! one of my main focus's of this project was to do quality documentation, so its grea that you say that! And yes I am using serveral DyIO's i went to WPI where I met the creators of the DyIO Alex Camilo and Kevin Harrington, I've been familiar with their software hardware paradigm for several years and I use it because I like it a lot! I feel like hackaday should highlight all the projects that are utilizing other projects that would be neat. And neat project seems we are working towards similar goals!

I have to agree with Dylan on that. You can't take the human interaction away, that's one of the key nutrients. We had something similar goin for a while (back when the only remote notification medium was SMS! and arduino kit came in one little box) until I decided soil was a better way. You notice the produce lacks a certain......I dunno, energy to it when they miss out on having you around handling them and breathing on them and stuff. I'm not a fan of your choice of food for those babies either, but boy oh boy this is AWE$ome man keep it up. I'd be thrilled to see what you're pulling off this project.

Just wanted to chime in to say great work! You're making killer progress and I love the detail you're going into with each update. Following this project has been quite motivating, keep it up!

Thanks a bunch for your kind words! I'm glad folks are enjoying what I'm doing as much as I am, thanks again!!!

First of all nice project!! I've been reading my mind ;)

Take a look at our Startup and you'll see what I mean.

Heads Up, the site is still under development and should not be open to public....but ok...we have nothing to hide.

Actually we are developing for some time now exactly what you propose here, of course we use and take different approaches regarding the needed hardware, but the mission is the same.

We also thought to go Open Source, and actually most of the hardware we developed so far is on Open Source platforms, but until we have a fully working version we don't to put nothing out there.

Congrats on the project and on the lovely designed hardware, maybe we can focus efforts in some way.

Hi Joao, sorry I haven't gotten to this! Yes it seems that we are building the same thing but I have to say yours is much further a long, and well thought out/executed. I look forward to your release and urge you to share your sources. Thanks for you kind words about my project I really appreciate!

You're a few years ahead of me but this is similar to my interests.  I aim to become self-sufficient in food and fuel production with the help of aquaponics.  I think your hydropwnics system would integrate beautifully and be able to expand to control an aquaculture setup.  It'd really just be a few more channels for air and water pumps.  Here's a link to my relevant project: https://hackaday.io/project/4243-gardenmill . I'll be following your progress!

You know that ESP-8266 has an ARM core on it? And there is a tool chain for it now... several in fact. Linux, windows,... it's even supported (minimally) by the Arduino IDE now. I would drop the stand alone ARM and just use the EFP-8266 as the brains.

That's an interesting thought. See I was under the impression that the ESP8266 was based on some open source MCU core, which makes it cheap. Can you share a link where it says it is in fact an ARM Cortex or another ARM of sorts? I'm genuinely interested. That being said I'm open to the idea, though there are some ideas I have that could make use of both MCUs together, also I'm considering adding a few periperhals to the ESP to justify having both the FreeScale and the ESP.

I apparently lied... It's not ARM, but is in the same class:

- the name of this project couldn't even be any better.

- what happens if you grow weeds with your plants.... no way is weeding going to be fully autonomous

Hey thanks for the Skull!!! I understand it won't technically be fully autonomous, what I meant by that was that the nutrient solution would be self regulated (ph and nutrient levels) , lights, and pumps all on closed loop control with monitoring, so that the hydro system effectively runs on its own with little need for maintenance. I did have an idea a while a go to have a rail track mounting on the ceiling between rows of plants where a delta arm would be mounted , the idea being it would use computer vision and pick all the tomatoes that are red off the plants, heh maybe some day.

problem with a robot arm for picking is that it lacks the delicate touch of a human hand.  and human labor is probably way cheaper.

The 2015 Hackaday Prize
Growing food where it's needed, ready to be sold.
Project Owner Contributor

The 2016 Hackaday Prize
Ideally, Stablishing an underground crop based on hydroponic technology and controlled through genuino to sustain a plant storage.
Project Owner Contributor

The 2015 Hackaday Prize
Monitoring soil moisture at different depths to determine when to irrigate, and - more importantly - how much water is needed. Save 25%!
Project Owner Contributor