Project R(rrrr) is a low-budget research robot for the rest of us.

Couldn't convince the spousal unit that it was okay to drop hundreds of thousands on a PR2? Did telling her that the UBR-1 is 1/10th the price still not convince her? Enter Ruprecht (the Redesigned Rudforce Research Robot), a small, apartment-friendly, autonomous, research-style bot that doesn't cost more than your car (or house).

R(rrrr) is intended to be an indoor robot for playing with, I mean, researching areas such as

Project R is semi-modular in that the main components (e.g. chassis and arms) have their own mini brain of an ATMega. Then a main brain commands those parts over I2C. Thus the main brain can be swapped out for any suitable controller than can speak I2C, like the BeagleBone Black, Raspberry Pi, pcDuino, or even a Propeller or Arduino if one doesn't desire a USB system. With a sufficiently powered main brain R(rrr) may even be able to run ROS so one could research like the big guys (no promises though).

Using a BeagleBone Black for a main brain, Ruprecht has a wifi dongle and a webcam on its USB. The wifi could allow for on-robot software development as well as having a control interface accessible via LAN. Eventually it could let Project R harness the power of the cloud in its activities. (I'm truly sorry, but the "needs more buzzwords" part of my brain is screaming to be included.) The webcam is intended for using OpenCV or the like to work with object recognition. It could also, obviously, be used for telepresence operations like checking on your house or observing pets while you're out.

What good is a research robot if it can't grab things, right? Ruprecht will begin with a pair of simple 5 DOF arms made of hobby micro servos. Hopefully some more powerful arms are in his future.

Here's a rough diagram showing some of what's already there, and what I intend to put in at some point. 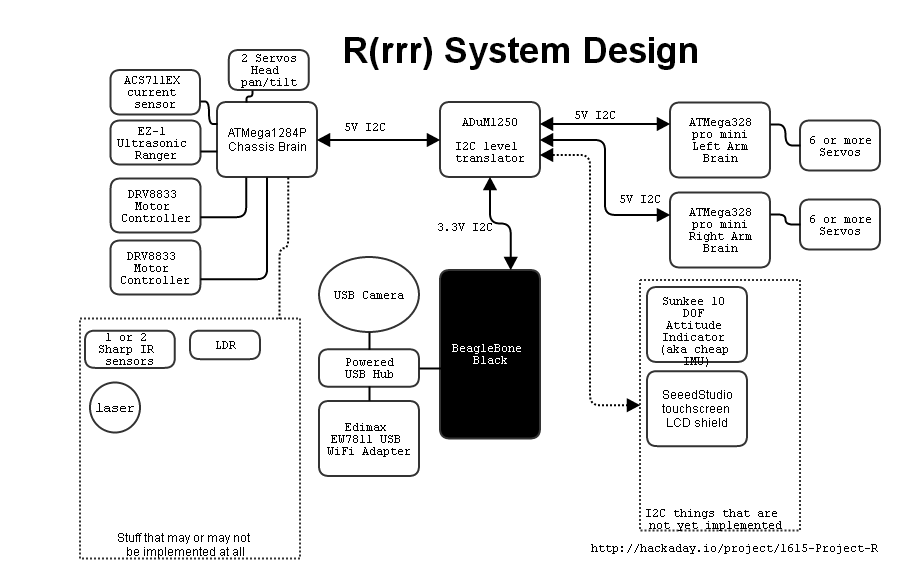 Ooh, I made a video!

I love this little guy!

The only drawback to my CAD drawings is that I have to stash em so the wife doesn't hang it on the fridge...

Adam Fabio wrote 07/06/2014 at 05:11 • point
Love your "CAD" drawings! Thanks for entering Project R in The Hackaday prize! - The more 'bots the better! I hope R' will be able to run ROS! Don't forget to keep the updates (even crayola based) coming in!