A multi purpose lab tool accessible by simple Python functions, and capable of studying a wide range of physical phenomena.

This project was started with the objective of providing an affordable, yet wide collection of measurement and control tools for the curious ones among us.

To put it simply, it uses a microcontroller with a fairly powerful set of peripherals, and complements it with a variety of analog and digital tools such as programmable gain amplifiers, waveform generators, LCR meter, CC sources etc. All functionality is controlled via a Python module that runs on the PC to which the device is connected via USB. Digital communication ports allow addition of add-on boards.

A flexible set of tools have been packed into one tightly integrated unit in order to enable students to explore experiments across the sciences.

Production version here : This project has been adapted for mass production, and packaged along with an SBC running the necessary software.

The software has over 70 different experiments, and a custom experiment designer.

Calibrating with a 24-bit ADC and a Keithley 2100 multimeter

The very first board!

A) Measuring the forward threshold voltage of a diode, and studying the effect of temperature on the band gap.

Several IV plots were obtained and plotted along a third axis as a 3D line plot. The diode was heated somewhere in the middle of the acquisition ( notice the inflection point ), and this added thermal energy changes the band gap, causing the threshold voltage to drop.

An op-amp based multiple-feedback band pass filter was made with values calculated from simulation tools available at http://sim.okawa-denshi.jp/en/OPtazyuLowkeisan.htm . The transfer function was experimentally determined using the device's waveform generator, oscilloscope, and curve fitting routines from scipy.

*The PIC1572 based PWM waveform generators have since been replaced with a high resolution DDS, the AD9833.

C) Supporting a variety of SPI/I2C/UART protocols allows accomodating a variety of sensors in a plug and play fashion. A wide range of modules such as accelerometers, gyros, doppler radars, weighing sensors etc have been tested.

D) Inexpensive wireless nodes with unique addresses can be used to implement mesh networks for data collection. The wireless nodes are configured to use 3 byte addresses, and this leaves plenty of room for multiple sensing points/parameters.

The following is a demo with the MPU-6050( accelerometer + gyro + temperature sensor) used in the above video, except here the data transmitted back is being used to orient a 3D object in real time. IC temperature decides the object shading gradient.

The third prototype was presented at http://Scipy.in, a conference on scientific python held at IIT Bombay. The abstract can be found Here 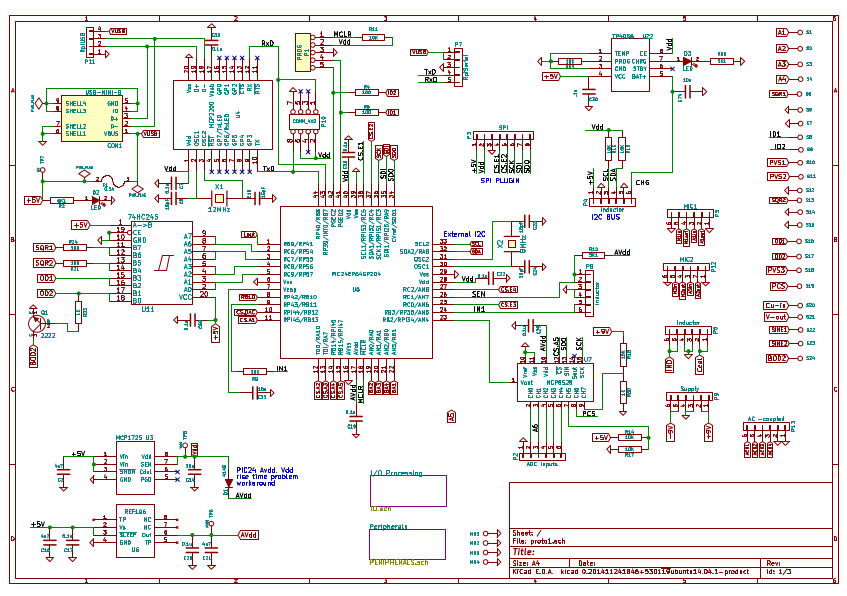